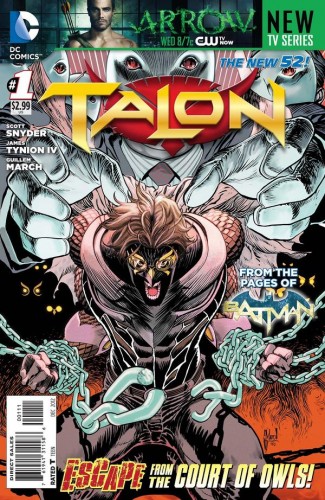 It’s been seven years since Calvin Rose abandoned the Court of Owls and got the hell out of Gotham, hoping to never return. Now, with the Night of Owls having happened though, with the seeming dismantling of the Court and imprisoning of their Talons…he feels compelled to return. To see for himself, to prove to himself that he doesn’t have to spend the rest of his life on the run. So how does he plan to go about this? By jumping off of a blimp in a wingsuit and breaking into a Court hideout to check out their systems. If they are inactive, he’s free, if not…then at least he’d know. Security is still up and running, however, and his presence sends out an alert to every Owl base. A mysterious man intercepts it, showing immediate anger at Calvin for getting caught.

But this is Calvin’s story, and while a lot of Talons are locked up in Blackgate, there are apparently still a few on the loose. Something he finds out after one introduces her boot to his jaw. This leads to a display of just what his strengths are, as the Talon outclasses his strength and has that nasty Deadpool style healing factor. Calvin, on the other hand, is agile, knows how to fight, and has a knack for getting the hell away. The Talon keeps giving chase, but Calvin eventually manages to take her down…himself as well, only for the mysterious man to show up to pick him up.

Almost a day later Calvin wakes up in a non-hostile environment and freaks out, attacking the man who does succeed in calming him. The man, Sebastian, wants to work with Calvin against the Owls, who are not gone…though they are severely weakened. He’s an old man that has been plotting his revenge on the Owls for his entire life, and who has the resources to wage a war against them. He has the mission for Calvin, eliminate their resources across the country and take down the last sixteen Talons. Destroy the Court forever.

And Calvin still wants his revenge.

If Night of Owls had been a flop I’d be saying “at least we got this out of it”, but that isn’t the case, Night of Owls was great. So instead I’m going to say “this is just icing”.

Nice Batman RIP reference in the art to open the issue.

When I first heard about this book I expected the plot to be about a guy on the run from the Court getting relentlessly chased in means that just wouldn’t make sense after a few arcs, and the zero issue didn’t do much to alleviate that feeling. So reading this issue and seeing that the book is, instead, going to be Calvin taking a proactive approach and playing the role of the hunter is a real plus for me.

I’m really looking forward to seeing all of the Talon designs on the sixteen that are due to show up in this book. The different designs were some of the coolest parts of Night of the Owls.

So I went into this week not really sure what to review. Look at this weeks lineup, nothing really marquee actually sitting on my reading list, and while most weeks I come in, read one or two books, and then get to reviewing…this week I was about six issues deep into my stack before something stuck out enough for me to really want to review. Not to say anything I read was bad, just that I like to use my first review of the week to promote what I feel is the marquee title of the week. Not necessarily the best book of the week, but definitely the one I feel deserves the most attention. This week Talon not only earned the spot of the marquee title, but it did so by being absolutely phenomenal.