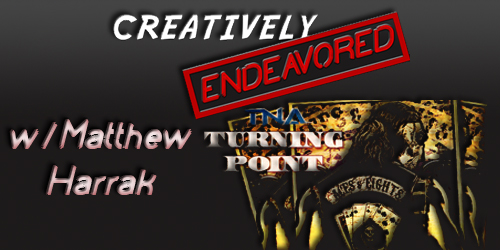 – I really don’t know which is worse… DOC or Festus?

– As much as we all may knock TNA for their creativity, their work w/the Red Cross is to be commended.

– Wow they’re really going with the new commentator for a 3 way booth & not Borash? Is Mike Tenay retiring?

– Did I just hear Tenay mention Ring of Honor? Its about time! Too bad he didn’t bring it up during one of the MANY Joe/Styles/Daniels matches.

– Very good opening match between Magnus and Samoa Joe. TNA really has something with these two.

– Is it just me or does Tenay sound a hundred times better now that he doesn’t have to carry the PbP?

– If the rumors are true, I’m really going to miss Eric Young.

– Taryn Terrell is absolutely the best referee of all-time.

– I grudgingly have to admit that Jesse can hold his own in the ring. At least in a comedy match.

– Anyone else seeing the TNA career path similarities between Joey Ryan & Austin Aries?

– It’s REALLY early in Ryan’s TNA career but I’m surprised they didn’t put the belt on him. Of course theres not really a X-Division anyway.

– The separate entrance for Aces & Eights is a nice touch that doesn’t get mentioned often.

– I’m really curious to see how they go with this 3 way match. Is 1 guy really going to be out of the main event for a year?

– You know TNA has lost its way a bit when WWE has the better all around tag team division.

– Gangnum Style on a pro-wrestling PPV?!? Only in TNA.

– Alright tag title match but nothing up to the level that TNA usually produces.

– That promo from AJ Styles made me believe that he’s the one that’s going to be taking a break for awhile.

– I’ve said it before but I truly believe that if AJ Styles had this career & quality of matches in the WWE, he’d be regarded as the next Shawn Michaels.

– GREAT Beer Money for long-time TNA fans. And perfect conclusion to it.

– Either AJ is going to get a deserved break or they’re going to use him to rebuild the X-Division. I do think it was the right choice.

– This still isn’t making Devon interesting. That match might’ve been the least entertaining of the night.

– Aries and Hardy really seem to be off tonight.

– This is probably the most conservative Hardy ladder match in history. Honestly, GOOD! He’s not 21 anymore.

– I think that’s the first time we’ve ever seen someone revealed as the person who mysteriously raised the belts in a ladder match.

– Considering how sloppy some of the spots were, Hardy & Aries put together a pretty good ladder match.

– All in all, an ok show. Not one I’ll go back & watch but not one I was dissatisfied with.