We’re back! I know, I can’t believe it’s been a whole week already. I’m sure you missed us more than Blair Douglas loves misspelling Sheamus’s name.

The Miz has a special guest tonight: John Cena! We recap last Monday’s events with Cena, Ziggler, and AJ before the young lady shows up. Just as Miz begins to ask if there’s anything really going on, Ziggler and Vickie Guerrero interrupt and berate the two faces. Cena talks about how Vickie eats nuts and Ziggler can’t find his own and the segment comes to a merciful end.
Mike: Hope everyone in the States had a great Thanksgiving!
Kelly: And everyone not in the States…fuck you, the turkey was great.
Mike: That was incredibly rude.
Kelly: I’m incredibly rude.
Mike: True. Hey look, it’s John Cena on Smackdown!
Kelly: And, we get to watch Cena kiss AJ again. Weird. And mildly gross.
Mike: See what happens after a divorce, kids? You can make out with younger women almost immediately!
Kelly: Hooray!
Mike: John says he kissed AJ because he heard from CM Punk, Kane, and Daniel Bryan that she’s got a great tongue.
Kelly: It’s about time that the implied whore-ing around of the Divas made its way into a storyline. Well, her ears must have been burning. Here’s AJ.
Mike: Wouldn’t it be funny if she tweaked her knee skipping to the ring? Then she and Cena could have matching knee braces.
Kelly: Funny isn’t the word I’d use, but whatever you want, sweetcakes. And now here’s Dolph. It’s a party!
Mike: Jesus H. Christ, this entire first segment has been nothing more than a recap of the half hour devoted on Monday to this “scandal.”
Kelly: I’m bored of this.
Mike: What else is on?
Kelly: Looks like The Natural is on Ion for me. Ooo, and Ghost Adventures!
Mike: How about this? 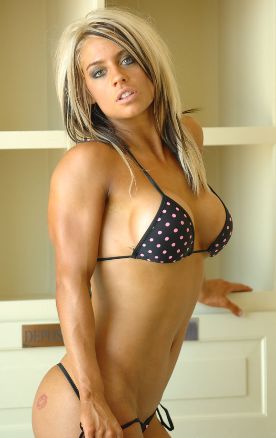 Kelly: Kaitlynnnnnn…
Mike: And the segment’s over!
Kelly: Don’t tell me we’re going to have another bout of two WWE wrestlers fighting over this skank. Whatever. I’m checking out. Ryback’s turn!

Ryback vs Darren Young
Mike: Looks like Mr. No-Days-Off should have taken a leave of absence.
Kelly: I don’t understand this match.
Mike: It’s simple: Titus was awesome on commentary on Monday night, so they’re giving him another opportunity.
Kelly: Then grab Kidd. Or Santino. Or the guy in row E, seat 12. Not Ryback.
Mike: Loved O’Neil on commentary. In reference to Young trapped in Shellshocked: “I’ve seen him escape from this before.”
Kelly: Ryback disposes of Titus. Next.
Mike: Next? A commercial break, obviously.
Kelly: I’m not asking what’s next, sugar plum.

R-Truth vs Antonio Cesaro
Kelly: Why does R-Truth still happen?
Mike: Because you don’t give me any sweet, sweet lovin’.
Kelly: Oh boy. Meh…I can pretend to pay attention a little longer.
Mike: Cesaro’s going the whole “You’re all fatasses” promo route.
Kelly: Cesaro is, like, acting all tough and stuff in the ring. Yeah.
Mike: Trading bitch slaps now….Truth’s in control.
Kelly: Truth wins?
Mike: What….
Kelly: Yes sir…he just did…don’t ask me why.
Mike: That was abrupt.
Kelly: Well, in other news, Booker is chastising Sheamus for his actions at Survivor Series.
Mike: He telegraphs a Chair Match at TLC. Bravo, Booker.
Kelly: Ridiculous. Oh, and we get to see Show against Hell No tonight in a handicap type thingy thing. Neat.
Mike: Jobbing out the Tag Team Champions? Boo.
Kelly: Sheamus won’t be able to help himself. He’ll sprint towards the ring, brow furrowed. He’ll strike Show with the anger and disdain he has held on to for so long. The crowd will go wild! And Mike and Kelly will nap.
Mike: Nap heavily.
Kelly: Napping rules.

Sin Cara vs Alberto del Rio
Mike: Zzzzzzzzzzzzzzzz
Kelly: Oh hey look, it’s Sin Cara.
Mike: Del Rio vs Sin Cara? Something fresh!
Kelly: Ricardo has magnificent lungs. Mine are coated with tar and cancer.
Mike: You did that to yourself.
Kelly: No. God made me this way. I blame him. Dang, Cara and ADR look great together.
Mike: Sweet match so far.
Kelly: Sweet lighting, bro.
Mike: I still think the lights should flash red when Sin Cara takes too much damage.
Kelly: Ha! That’s funny.
Mike: I’m loving the quick pace of this match. It screams lucha libre.
Kelly: Yeah, it’s nice to see Sin Cara in a match with a real contender, not a two minute Diva-like match with some kid who I quickly forget.
Mike: The crowd’s pretty hot for this, too.
Kelly: Lots of impact, lots of flight. Of course they’re eating this shit up. Cross Arm Breaker and it’s over.
Mike: Have you noticed that del Rio ALWAYS beats the midcarders clean to keep his heat when he loses to every main eventer?
Kelly: So silly.
Mike: Kane and Daniel Bryan have a nice little spat backstage. What the hell is a “vegan turkey”?
Kelly: Something created by Satan.

Handicap Match: Big Show vs Team Hell No
Mike: Ah, the Attitude Era. So many memories.
Kelly: “Hey guys! I know you hate our PG stuff, so here! Look at how it used to be! U jelly?”
Mike: “Jelly”? Really?
Kelly: Yes. Really. I typed it. So it’s there. Really.
Mike: Hey, remember when everyone said the tag team division was totally reinvigorated? And I said that people were getting their hopes up?
Kelly: Was it in your column?
Mike: Yup.
Kelly: Then, no.
Mike: You bitch.
Kelly: Love ya. In other news, Show is a little wobbly after going back and forth with Bryan.
Mike: I am just so bored with this.
Kelly: I’m literally watching a pot begin to boil.
Mike: There’s only two possible outcomes in a match like this: Big Show chumps out the Tag Team Champions, or we get a non-finish.
Kelly: With how much they seem to love Hell No, I’d vote for the latter. But I’m always wrong, so…
Mike: There has been NO development in the characters of Team Hell No since the team’s inception.
Kelly: Yet they’re still everywhere. EVERYWHERE.
Mike: Not really.
Kelly: Well, I only watch Smackdown. Quit poking holes in this. You’re ruining my buzz.
Mike: Big Show wins.
Kelly: Sheamus is cross.
Mike: Celtic Cross?
Kelly: Ultra gay.
Mike: Whatever. I was staring at this all match:

Intercontinental Championship: Kofi Kingston vs Damien Sandow
Kelly: Anyway, Intercontinental Championship time.
Mike: Wade Barrett is on commentary. It’s about time he’s got an actual angle to work with now.
Kelly: I just hope I can understand anything he fucking says.
Mike: He just called Sandow an “unknown quantity.” WHAT?!
Kelly: See?
Mike: I’m pretty sure that’s not a British colloquialism.
Kelly: Kofi’s eyes are about to pop out, as we return from commercial.
Mike: Sandow with a vicious set of knees as JBL and Barrett agree that Mathews is annoying.
Kelly: This is really, really…slow.
Mike: And we’ve still got Orton vs Ziggler later.
Kelly: Oh yeah, I actually forgot about that.
Mike: High cross body from Kofi gets two!
Kelly: He’s getting fired up. Signaling for the Boom Drop…connects.
Mike: Trouble in Paradise ends it.
Kelly: So, is it protocol now to do commentary, then call out your contender from atop the announce table? This is a complete duplicate of Truth calling out Cesaro a mere week ago.

Randy Orton vs Dolph Ziggler
Kelly: Time for Randy and Ziggler, I suppose.
Mike: The only way I’ll call this show a success is if Ziggler beats Orton.
Kelly: I hope you’re right.
Mike: Aaaaand one final commercial break as the fight heads to the outside.
Kelly: Randy is in control when we return, both men in the ring. But the fight finds its way back outside, where Orton eats a BEAUTIFUL dropkick.
Mike: Ziggler ironically may have hurt his knee. Orton escapes a rest hold but Ziggler continues the attack.
Kelly: Backbreaker from Orton for another nearfall. Ziggler comes back with a big DDT.
Mike: Superplex!
Kelly: Randy begins his usual combination.
Mike: RKO countered into a roll-up! Ziggler wins clean!
Kelly: Ricardo goes for the sneak attack, but is met with an RKO. Del Rio stops cold, right as Cena joins the party and ambushes Ziggler, locking him in the STF, and we fade to black.
Mike: Wow. That was actually an exciting end to what would have otherwise been a lackluster show!
Kelly: It really was!

Final Thoughts
Mike: Thoughts?
Kelly: Not really. I’m just really glad I was drinking for this episode. Oi.
Mike: I guarantee on Raw we get Cena/Orton vs del Rio/Ziggler.
Kelly: I bet you’re right. So I’ll forget to tune in for the 63rd week in a row.
Mike: Of course. Well folks, by this time next week yours truly will be officially 30.
Kelly: You’re only turning 30? Huh.
Mike: What do you mean, “Only”?
Kelly: Nothing. Nevermind. Happy early birthday, as I’m sure I’ll forget to text you!
Mike: It’s Tuesday.
Kelly: Okay, chief.
Mike: Everyone knows it now, so if I don’t get a text you’ll have to deal with my ravenous fanbase.
Kelly: I’m sure your mom will understand.
Mike: …….
Kelly: Bazinga.
Mike: So long…
Kelly: And thanks for all the fish.