Now, this isn’t news to regular readers here, but I am a Kyle Rayner fan. He’s my Green Lantern, and one of my all time favorite characters, and I am more than happy to admit as much. I also haven’t had trouble pointing out that his continued existence in the New 52 is a giant glaring blackhole of continuity that has only gotten worse as the months have gone on.

Kyle Rayner, originally, was given a ring by Ganthet after Hal Jordan went insane and destroyed the Green Lantern Corps. The Guardians sacrificed their lives to imbue this final ring with their power, and Kyle became the ONLY Green Lantern for several years of comic time (and over a decade of real time). During this time he loved and lost on multiple occasions, the first being Alex (and the infamous refrigerator), the second coming in the form of Donna Troy (who no longer exists), the third was Jade (also doesn’t exist), and the fourth was Soranaik Natu (again, doesn’t exist). His primary mentors? Alan Scott, who no longer exists in the core world of the New 52, and John Stewart who has had so much of his own history gutted out of him that he and Kyle didn’t even meet until well after their established adventures together (which happen to have led to the reason John got his ring back in the first place).

But despite having a history that no longer makes sense, and a story filled with holes, Kyle has prevailed and survived in a relaunch that ended the tenures of Wally West, Donna Troy, Cassandra Cain, and familiar versions of quite a few characters that have actually shown up. Kyle manages to survive where so many others are viewed as headaches or toxic, and removed without a word but with a clear middle finger pointed towards some readers (my fellow Stephanie Brown fans).

So what’s the point here? Well, look at this page showing off Kyle’s origin. 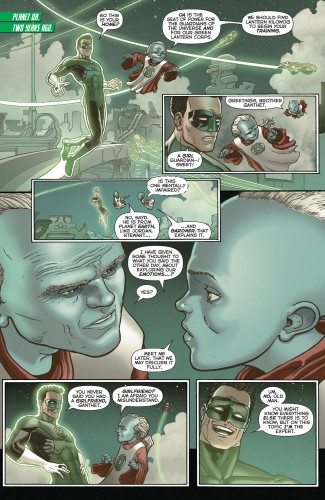 No longer the Torchbearer who brought the Corps back from devastation, Kyle is now just another Lantern who happened to have been personally recruited by Ganthet. He was trained on Oa, which was thriving when he was a white circle, and with that he loses the last bits of characterization that made him different from the other Earth born GLs. Kyle Rayner, who notoriously was thrown into the waters with no life raft or knowledge how to swim, is now just the same as any other Lantern. Ganthet was the only Guardian from the moment Hal went crazy up until Kyle reignited the Central Battery and assisted in the rebirth of the Guardians, meaning Sayd wasn’t technically even born, let alone already in an awkward love story with Ganthet.

Which makes me wonder why they treat him like he’s important at all? If Hal didn’t go crazy and end the Corps, then why did Ganthet need to go recruit yet another Earthling? How is the Torchbearer if there was no Green Lantern Corps for him to restart? I never thought I’d see the day, but I am actively hating on the continued existence of my favorite still around DC character (because they got rid of Booster AND Steph) simply because he’s been wiped as clean as any of the Teen Titans. Kyle Rayner in name only….well, name and girlfriend that was stuffed in a refrigerator…even if Major Force doesn’t exist to have done it. 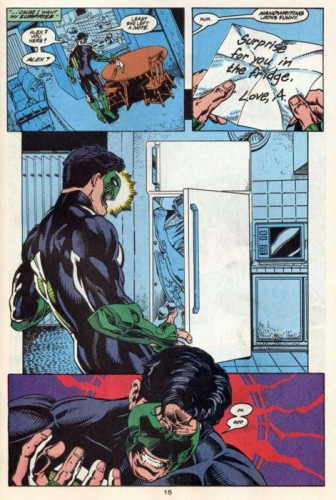 In reaction to this retcon bomb, Russ over at Comicbook.com did his own version of this piece but took it one step further.

He dug out the first issue of New Guardians (which I will admit was just too inconvenient for me to do at the time) to show that this isn’t just a change for the New 52, it is, in fact, changing the New 52. 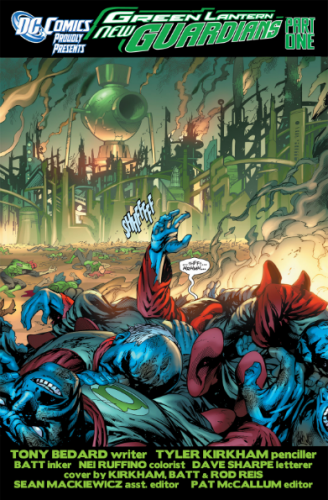 The very first issue of this book opened up acknowledging Emerald Twilight, the fall of Hal Jordan, the destruction of the Green Lantern Corps, and Ganthet as the last Guardian. 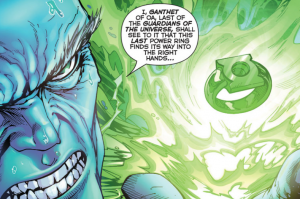 So can anyone explain it? Because I sure can’t. This book is directly contradicting itself, and it’s just further proof that trying to say nothing changed in Green Lantern is as futile as doing so with Batman.

Kyle Rayner and Damian Wayne are the two biggest blackholes in the New 52 continuity, for all intents and purposes they should not exist, and I am going to keep buying all things Kyle up until DC realizes this fact and, rather than make Kyle work, just put him in the box with Wally and Donna. 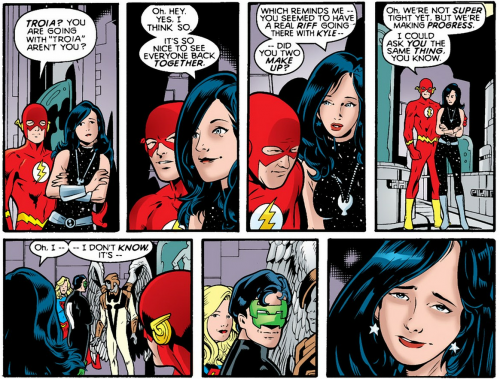