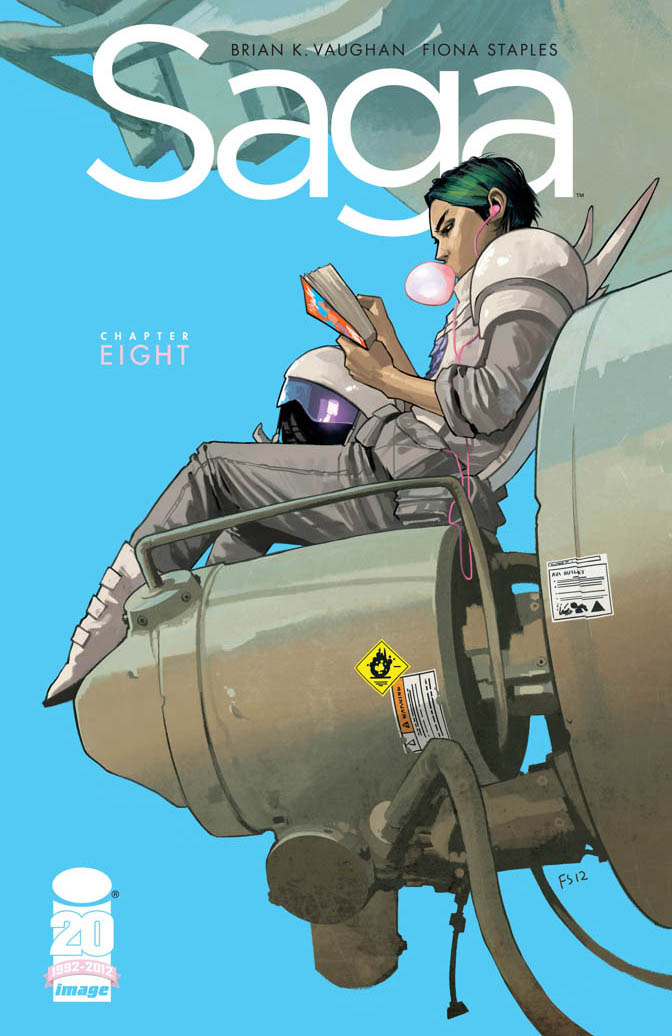 Art and Colours by Fiona Staples

Flashback to the time when Alana was a guard and she enthusiastically tries to get a comrade to read the book that she just completed.  Then it shows her first encounter with Marko as he is a prisoner on Cleave.  If there are any expectations of love at first sight then things don’t really go as expected.  Back to the present and Alana is waking up while Barr is putting Hazel down for a nap.  Alana tries to rally the ship to her aid, but Barr has already addressed this possibility.  Meanwhile Marko and his mother are confronting the large creature (now known as Fard) and they manage to get some answers out of him by combining their magic powers.  Fard provides them with some distressing information about their current whereabouts as they continue to search for Izabel.  Alana awakens once again, but is pleasantly surprised by Barr.  They have a good conversation about what is going to happen soon as well as her relationship with Marko.  A representative from Brio Talent Agency is speaking to a freelancer called The March, but is interrupted by a client who demands the services of The Will.  The client then makes a surprise appearance at the Brio Talent Agency much to the shock of the representative.

This was a very good issue.  Barr is a really likeable character and he provides a much-needed voice of reason during stressful times.  His approach to things is reminiscent of how Marko has been doing so in this series.  I’ve been back and forth with regards to Alana during the past couple of issues, but her part at the beginning of the book made her much more endearing.  She’s a real hardass, she has a hard time trusting people, and is very headstrong in this series.  However, this issue reminded me that she’s stressed out by the conflict and she’s so focused on protecting her family.  This is evident when you see her enthusiasm and genuinely nice disposition at the beginning of this book.  Staples does a really good job of conveying innocence in her eyes during this scene.  This scene also gave me a hint about why she eventually chose Marko over her own people.  The dialogue was also very good in this issue and I was glad that they were split into two parties because it just helps overall with character building.  Some of the things that they said felt organic and it helped to make their conversations seem more realistic (i.e. Marko’s mother referring to Alana as an overgrown house fly).  I also really enjoyed the scenes with Alana and Barr a lot.  The cliffhanger on the final page also has me anticipating the next issue as I’ve been wondering when this character was going to emerge.  As good as Vaughan is as a writer, Fiona Staples is the one really elevating this book to a higher level.  I could see other artists doing a good job, but she’s really making this book into something special.  Although it isn’t a part of the main story, this does deserve some mention.  At the end of the book, she goes a little bit into her artistic process and this is worth reading.  I really enjoyed reading this book.

Man I still don’t like the character design of Fard.  Something more crazy like bunny ears coming out of his crotch would be more interesting than looking at a giant set of walnuts.  Fard’s revelation about their surroundings kind of had me saying ‘meh,’ but I’ll wait to see what happens with it next issue rather than rushing to any conclusions.  It almost looks like Marko is getting his front teeth knocked out at the beginning of the issue, but it doesn’t look like he’s missing any teeth prior to or during the rest of this issue.  Then again, he probably could’ve just used magic to fix it I suppose.  I don’t like the fact that Barr is dying (as revealed in Chapter Seven).  He’s already one of my favorite characters and I hope he remains on the comic for a little while longer.

Buy It…if you’re a mature reader.  This book is getting better (not that it was ever bad to begin with) and this issue had some great character progression.  I really liked the cover of this issue and the art continues to make this book stronger.  I enjoyed it from beginning to end and am really looking forward to the next issue.