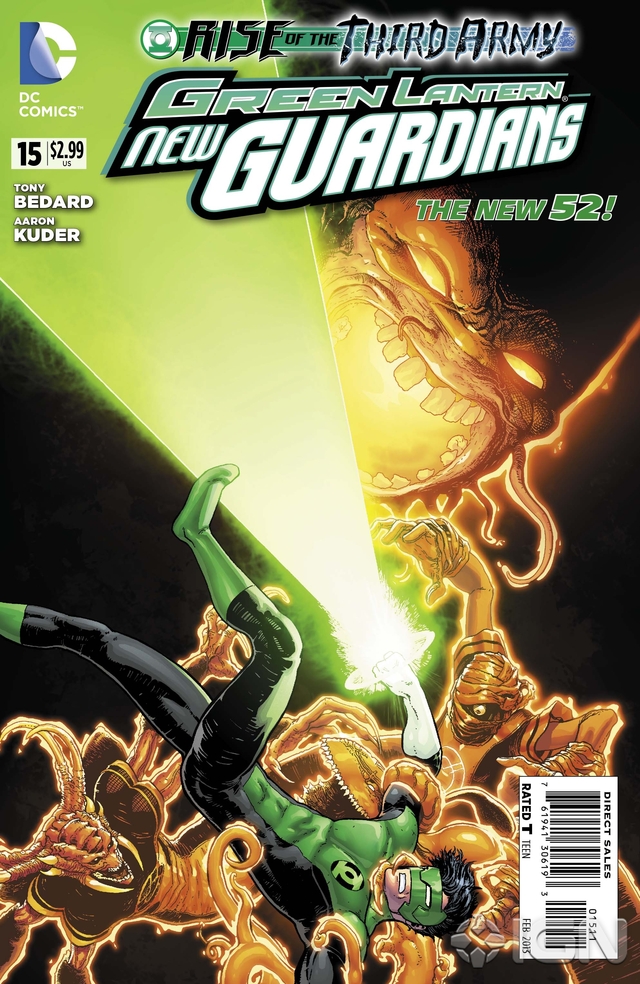 “The Need for Greed”

The Zamarons are watching the Third Army take apart the Spider Guild and they reveal who their next target is.  On Planet Okarra, Kyle, Carol, and Arkillo locate Larfleeze.  Flashback to two years ago and Ganthet is showing Kyle around Oa for the first time as Sayd also discusses some sensitive information with him.  Kyle recognizes what he is seeing even though Ganthet is ignorant to it.  Back to the present and Larfleeze does not want to assist Kyle in wielding the light of avarice, but Carol manages to change his mind.  Larfleeze gives Kyle a crash course in learning about avarice, but Kyle is able to utilize the other colours much to the surprise of Sayd (who is still Larfleeze’s Guardian). Suddenly they are all attacked by members of the Third Army and are unable to effectively fight them partly due to Kyle being so heavily influenced by the orange light.  Carol utilizes someone from Kyle’s past to break him from his spell and they make their escape while Sayd stays behind and professes her love for Ganthet.  Back on Oa, the Guardians are watching events transpire with Kyle, Carol, Arkillo, Larfleeze, and Sayd.  Ganthet is taken aback and vows to deal with Kyle himself.

I was enjoying this issue as it had some really good things going for it.  This issue begun to peel back some layers from Larfleeze and it has opened the chance to further explore his background.  He’s been a pretty one-note character thus far and he’s one character in need of some depth.  His approach to teaching Kyle about avarice was really well done and his ability to wield this light put him over as a serious threat.  He’s been treated like a side-joke sometimes, but there was a really good point made that he’s a one man corps.  I also enjoyed Carol’s use of her powers to reach out to members of other corps.  Even if it was only a construct, it was nice seeing this person from Kyle’s past.  It does seem like Kyle is going to play a large role in fighting the Third Army soon.  His creativity with using the different colours is vintage Kyle and he does seem like the Green Lantern most likely to be able to learn to wield them.  I’m glad that the Third Army was able to come across like a legitimate threat once again.  Back when the Green Lantern Corps title relaunched after Green Lantern Rebirth, the Spider Guild was the ultimate threat to the GLC and they were owned this issue.  I liked the art a lot more this issue and it made the story better overall.  Quintana did a good job of colouring this issue.  He provided the constructs and light attacks with a lot of depth and clarity.  I would have really liked this issue…

Why did they retcon Kyle’s origin with the GLC? That single page pissed me off a lot.  In fact, it made me almost miss seeing things that I enjoyed in this book.  At the time of the reboot, we were all told that GL and Batman would remain mostly intact (their sales were good prior to the reboot).  This is a pretty significant change to the history of GL as Kyle is no longer the torch bearer.  I just don’t see the need to do this.  I don’t recall reading scores of requests asking for his contributions to be downsized.  I’m a Hal Jordan fan and I was glad when he came back, but I still liked Kyle and he was always given props for maintaining the GLC when no one else could.  There’s another article written by my esteemed colleague Grey Scherl on this topic so I’ll just say this.  Get it straight DC.  I’m still unsure if whether or not I like the design of the Third Army.  Sometimes I do and sometimes I don’t.  Speaking of the Third Army, Kyle, Carol, Arkillo, Larfleeze, and Sayd are getting owned by them.  This fact is still hampered for me because of how the Third Army were dealt with over in the Red Lanterns title.  Atrocitus and his band were able to find a weakness, but the combined might of the others were unable to? I don’t know, it just hurts the story overall for me.  So at the end, we see a possible kink in the armour of Ganthet.  Normally this wouldn’t be a problem, but how can the other Guardians be so blind to this still? I’ve said this before, but they mindwiped him and shouldn’t the re-emergence of his little pony tail be some sort of indicator that his mind might be recovering? There’s one more thing that really bothers me, but I can’t write about it yet because it would give away a major spoiler.  What I’m going to do is write about this during my review of New Guardians #16.

After that page with Kyle and Ganthet on Oa, I want to say Ignore It.  I really do.  I’ll say Borrow It though.  The creative team does a good job of executing a well-told story and there is a lot to like in this issue.  There were a couple of things that really did take away from my enjoyment of this comic though.  Had I known that GLC history would be suddenly retconned with one page I would’ve just Shelf Read It myself.  This one page does change a lot of the GLC history and there doesn’t appear to be any method to their madness at this point yet.  I would’ve even preferred to see something lame like Kyle yelling, “Feel the rainbow! Taste the rainbow!” with a big candy-producing tree sticking out of his ass while fighting the Third Army compared to this.