The Gold Standard: What The **** Happened To Lex Luthor?!

A hero is only as good as their villains, and anyone who says otherwise has never tried to write a heroic protagonist. You need a threat, an antagonist, who matches up with your hero to provide a balanced amount of drama. If they’re too powerful, then the hero stands no chance and their inevitable victory feels forced, whereas if the villain is too weak then there’s no satisfaction in watching them get steam rolled. You have to find the happy medium in order to truly accomplish any sort of meaningful storytelling in a hero/villain story, and to be fair, it’s something most comics out of the big two really don’t struggle with.

Well, save for the biggest name character of all time, who never seems to have a legitimate listing of rogues and foes. A character who has really spent the majority if their storied existence married to a single villain, who really does happen to be one of the best of all time, but unfortunately, it’s a villain that many modern writers have completely failed in trying to figure out just how to classify him. 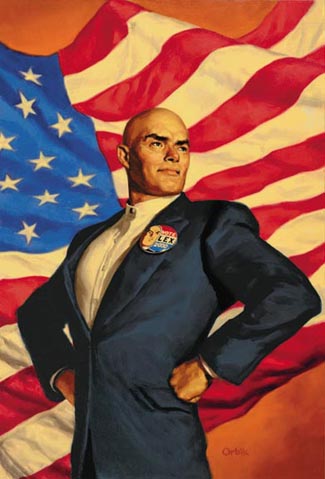 I talk, of course, about Lex Luthor. One of the best villains ever, one of my favorite villains ever, and easily the most iconic character that DC has managed to completely drop the ball with in the New 52.

See, I was raised on the animated version of Lex Luthor, as well as his early 90’s comic version. That means I know Lex as the legitimate mega-businessman that is secretly a bad guy. The kind of guy who accomplishes what he wants, when he wants, and despite Superman knowing it was him…he never left behind any proof. He wasn’t making world domination engines, or robbing banks, or doing any generic super villain stuff. He was going to conquer the world through legitimate success…only slightly bolstered by his under the table dealings. It made him scarier than Metallo or Brainiac; he could hurt Superman the most without Big Blue being able to punch him.

Now, I know that in the silver age Lex was a mad scientist super villain, complete with a purple costume, some green armor, and I’m going to presume wild death traps. That’s also where he wound up again in recent times, though I can speak for the recent memory and fans not taking overly kindly to it. It just didn’t make sense in the modern era to have Lex Luthor at secret bases scheming his ways to kill Superman or take over the world. Looking for different colors of Kryptonite so he could make himself a menacing and evil gauntlet that he could wear and laugh maniacally about how Superman couldn’t stop him. DC realized after a year or two that back peddling him that far was a mistake, and they tried to fix things up by putting Lex back in the business suit and letting him be savvy and suave and above the law. Next thing you know, guilty, Salvation Run, and then most of a year spent in a prison jump suit. And all those Injustice Gangs….

The New 52 offered us hope and promise for Lex to come back and retake central stage, and the version Grant showed us in the past wasn’t too bad. He was smart, he wore a suit, he worked with the military…he had all the makings of the modern Lex. He even made a deal with The Collector in hopes of gaining more knowledge and power for himself. This was going to be Lex Luthor, the untouchable villain of the greatest city and hero on Earth.

Then he debuts in the present in the most recent issue of Superman. The lone prisoner in a jail he was tricked into creating. Scarred, beaten, humbled, clearly outed to the world as a super villain as his jailers are all military. Sure, Luthor retains his classic arrogance, but it’s firmly a Lex created to be a megalomaniacal super villain. Sure, you could argue that he did it all in the familiar name of science and distrust of Superman that have always been around to add to his motivations, but this is a Lex that was, frankly, too dumb to to not be overt with his plans. 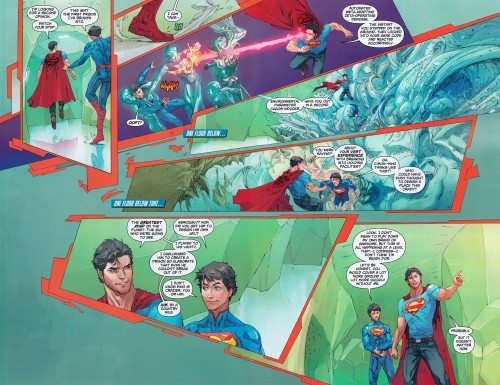 This is a Lex who won’t be President Luthor, or Forbes 500 Luthor, or really, any meaningful version. This guy is going to sit in a jail cell until he finds means to escape, and then he’s going to try and make Superman’s life hell from the shadows…most likely while wearing purple. Maybe we’ll see a writer try and put him back in the suit and heading up Lexcorp, but it’s going to take a lot of clever work, or just some well placed retcons. Because this Lex is too far gone in his first modern appearance to have to work backwards.

I mean, this is a Lex who was dumb enough to be tricked into making a jail he can’t escape from. That’s almost Mxyzptlk-esque ineptitude, but without the charm that comes from everyones favorite Fifth Dimensional Imp. This is Lex Luthor, the smartest man alive, the king of Metropolis, not some feeble screw up that would be tricked into locking himself up. He should be what Terry Sloane is in Earth 2, because save for the love of nuking everything, TERRY IS LUTHOR! Not this bad bald joke of what should be the most well crafted villain in all of the New 52. 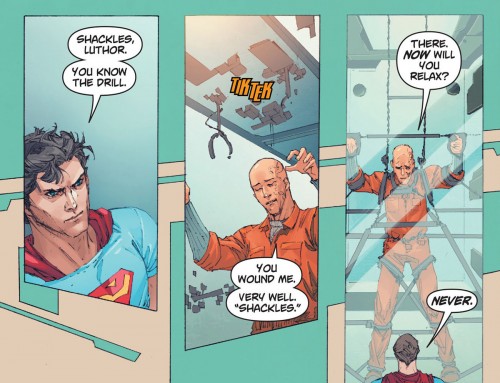 Unless, of course, writers and editors would like us to think that being the sole prisoner of a super jail with US military guards is something that you can just walk away from like it never happened. Maybe they can saw a Wizard did it, or a Venusian Mind Worm, or, and this is scarily entirely possible…they don’t explain it. The scars go away, the crimes (of which we are not yet aware) are ignored, and Lex reverts to a much more familiar, much more believable villain.

As it stands, the best Lex Luthor in current comics can be found in the same place as the best Superman, the best Lois Lane, hell, the best Green Arrow, Impulse, Martian Manhunter, and pretty much every other character that has appeared. I’m talking, of course, about Smallville Season 11, the haven for well written Superman characters…and well written DC characters in general. We’ve got a Lex Luthor that has been absolved of a past he can’t remember, and who now far more closely mirrors the Luthor of the 90’s, the brilliant strategist who makes Superman’s life a complete and total hell…but can’t be proven guilty for it.

I highly recommend that book over the core Superman title, and depending on the month and direction of the wind blowing, Action Comics as well. It’s a buck an issue digitally usually three times a month, or you can wait to get the print collections of multiple issues, but the bottom line truly is that it is a must read for anyone that considers themselves to be a fan of Superman. Especially given the other Superman titles available.

Put your faith in Bryan Q. Miller and he will never do you wrong. 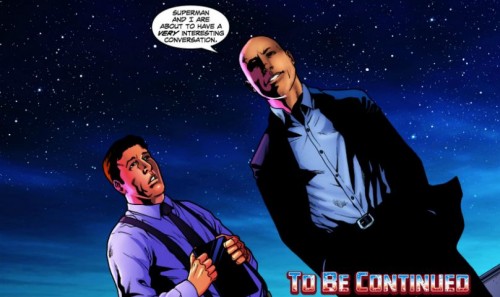