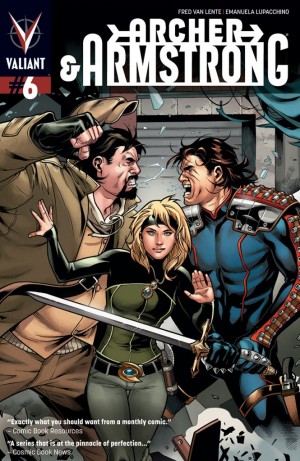 This issue begins back in 1718 with a confrontation between the Eternal Warrior and Blackbeard who has the Geomancer in captivity.  During their fight, Blackbeard reveals that he is part of the Null.  Fast forward to the present and we are introduced to Kay McHenry who is a spokesperson for Zorn Capital.  She is engaging in a televised debate with a man who represents Greenworks and afterwards its revealed that she’s privately in a relationship with him.  On her way home, she stops by her office and pick up a plant that’s been nagging her (literally).  She overhears Zorn and a few other masked men discussing recent events that have happened during Archer and Armstrong’s exploits.  She is discovered and Zorn reveals that he is with the Null and orders the One Percent to dispose of her.  They do so and Kay is confronted by someone with a new job offer.  Meanwhile, Archer and Armstrong arrive to help the Geomancer and confront the One Percent.  The Eternal Warrior arrives as well and provides them with an assist just as Kay reveals herself with a noticeable change.

Another month and another great issue.  The dialogue is one of the best things about this book.  Van Lente provides each character with such a distinct voice and personality.  There are little quips that I really enjoy (such as Kay saying “yay” while being locked in a trunk).  Humour plays such an important role in this title.  There’s so much that happened this month that I actually went and did a page count.  I really liked that Kay’s character was given so much screen time and this made her inclusion into the main story feel more important.  Much like Flamingo over in Harbinger, Kay was well constructed and her inner conflict was well played.  Her identifying “Mother Nature” was humorous and did more to build up her character.  Also, “Mother Nature’s” perspective on the old Geomancer and how Kay can be more effective in the modern world was refreshing.  Usually deity figures don’t offer that kind of insight and this put a much more unique spin on her relationship with her powers.  I’ve said many times that I’m unfamiliar with the previous incarnation of the Valiant universe, but I was told that there was a Geomancer title.  If they decide to go this route and create one I would go ahead and buy it based on this issue.  I also want to see more of the Eternal Warrior’s conflict with the Null as well as its implications.  So much is starting to come together and I can’t wait to see what’s in store.  The artwork was very good and I hope that Lupacchino stays on with this title for awhile.  With the other Valiant titles, I’ve liked the first artists in them (and I do like Henry’s work as well), but I’m really liking what Lupacchino brings to the table for this comic and have a preference for her work.  The cover was excellent this month too and I’m anxious for the next issue to come out.

NO BUTS…Nothing of note that I didn’t like this issue.

Like I even have to say it…Buy It.  Archer & Armstrong has been an amazingly consistent title.  Valiant has turned this slowly-becoming-jaded reader into a fanboy of the medium once again.  The characterizations, the storytelling, the art team…it’s all working so well together right now.  This was one of my favourite titles of 2012 and I’m confident that I’ll be saying the same thing this time next year.  I loved this issue so much that I put it by my pillow and whispered sweet nothings to it for hours…okay I didn’t do that, but I did really enjoy it a lot.