So when we last left off, DC was hard at work stripping down Kyle Rayner’s origin through a series of retcons…and not just of the “it was one way before Flashpoint and another in the New 52” variety. No, no. None of that. This was more of “Things were one way in New Guardians #1 and a different in New Guardians #15” sort of way. The book debuted with a flashback to show us that the fall of Oa happened, and Ganthet was the last Guardian who had to put the final ring in the right hands. 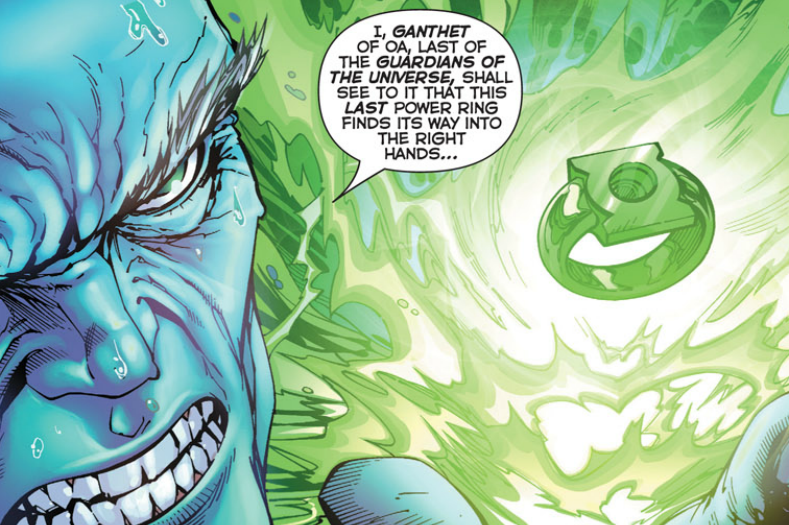 Kyle’s importance had been in his status as the Torchbearer, the Lantern who kept the light burning when there was no Corps, and who eventually brought the Corps back from extinction. It has become clearer and clearer as the series has gone on that, despite the book being promoted as every Corps wanting a Torchbearer, and Kyle openly referred to as the Torchbearer, he was just Ganthet’s choice for a new sector Lantern in a sector that already had three. In a Corps that had thousands.

But that’s just as of last issue, let’s get to the retcon bomb we were struck with this month!

This issue expanded further Ganthet’s role in Kyle’s early days as a Lantern, which, initially, was limited to him giving Kyle the ring, and then showing up randomly for a few years. In the New 52 he essentially takes Kyle under his wing, and without truly meaning to, fills the void in Kyle’s life left by not having a father. 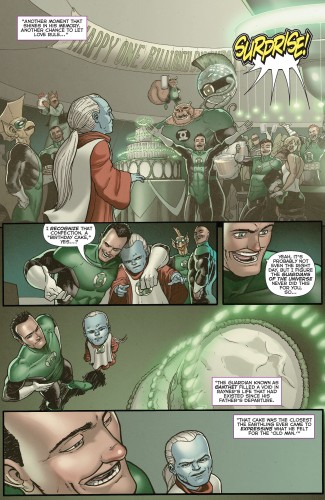 That’s the real bomb, Kyle’s father issues are reworked from the ground up. They’ve always been there, as Kyle was raised by his mom and never knew his dad…just that he had apparently been something to do with the military, his name was Aaron, and that with all of the JLA’s resources at his disposal he still couldn’t find him. Something he eventually did when initially going by the name of Ion…back before Ion was a green space whale. His real name was Gabriel Vasquez, he told Kyle everything, and while he was never seen again, it gave us closure to that part of Kyle’s life. He had a father who loved him, and the answers he spent his life searching for were finally his.

Back in New Guardians #13 we found out that in the New 52, Kyle had never met his dad. Really, I imagine that the majority of Judd Winick’s run has been completely expunged by this point. Anyway, the dad has a new story. He didn’t leave when Kyle was a baby, rather, he left when Kyle was six. So now Kyle not only has memories of his father, but the vivid memory of walking out to the car with him as he left for good. Something that now scarred him to the point where he wouldn’t even feel comfortable saying “I love you” to Alex. 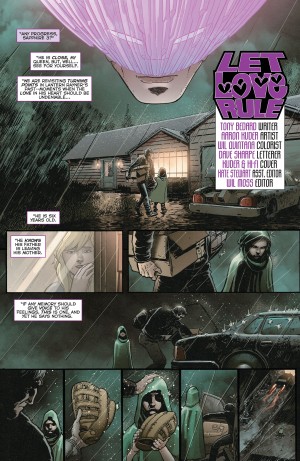 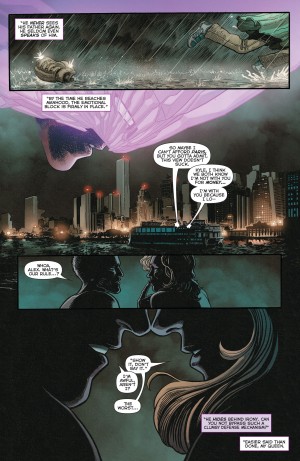 Awesome. Did Sinestro still kill his mom, too?

The problem with Kyle really has just grown to a point of…who is he being written for? The sake of a plot device? Because he’s being changed wildly beyond recognition every time they try and craft his new origin, and while he still looks and acts the same…how many of his stories even happened anymore? John and Alan never mentored him, Guy most likely never owned a bar where Kyle heard the old war stories. I doubt Grayven exists, so scratch the nemesis. Jade, Donna, and Sora don’t exist anymore. With the Corps never being destroyed, he brought nothing back to glory. What has he actually done?

And how expendable does DC view him in light of all of this?

Marvel Comics & Thor #25 Spoilers & Review: How Can A Dead God In Odin Challenge An Unhinged Dr. Bruce Banner In Banner Of War Part 2?!