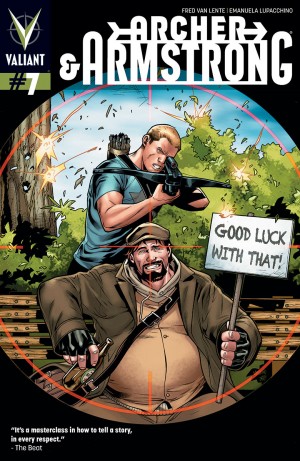 Back in Syracuse, 212 B.C. Gilad is attempting to enlist the help of Archimedes.  However, he finds that he is too late and is left with a cryptic message.  Back to the present and he is introducing himself to the new Geomancer, Kay McHenry.  He tells her why she is inexperienced and blames it on Archer and Armstrong.  They all exchange information and when Gilad (the Eternal Warrior) learns that the Null is involved, he states that it changes everything.  On the way, they discuss what the Null is striving for and Gilad uses some pretty extreme measures to get to Zorn’s building much to the horror of everyone.  Zorn gets away, but Gilad accepts that he must wait to deal with Archer who surprises him with his actions.  Despite their strained relationship, Armstrong comes to an agreement with Gilad about working towards stopping the Null.  Kay begins to realize more of her powers and utilizes them to read different things…one of them being Archer who may have some ties elsewhere in the Valiant universe.  Gilad makes a discovery that involves someone else in history that relates to a major problem in the present day.  Meanwhile Zorn arrives in Ittoqqortoormiit, Greenland and with his staff they decide a course of action to deal with Archer, Armstrong, the Geomancer, and the Eternal Warrior.

Another fantastic issue.  Van Lente does such a good job of incorporating humour into this title without compromising the seriousness of the situation at hand.  There were some decent one-liners again (since Julius Caesar was dropping deuces in his diapers, etc.) that really add to the characterizations.  The banter between Armstrong and Gilad was funny, but there was genuine tension and remorse that was touched upon in this issue albeit briefly.  I like that Gilad’s wits are returning to him now that the Geomancer has been activated.  He’s using his intellect in this issue rather than being just a mindless brute.  He is able to determine exactly what the Null accomplished as well as what the repercussions of that will be.  I am looking forward to seeing his character fleshed out more in the near future.  Archer’s character continues to grow on me because he’s so consistently written.  Also, I am really wondering what the deal is with what the Geomancer saw in him.  This issue introduced some more subplots that I look forward to seeing getting resolved in future issues.  I like the temporary team of A & A with the Geomancer and the Eternal Warrior because they all have such different personalities and they play very well off of one another.  Kay’s abilities are very interesting and I honestly wouldn’t mind her getting her own title sometime down the road.  The plan coming together on the part of the Null is well thought out and their objectives are clear.  It’s straightforward and complicated at the same time and I’m definitely enjoying that.  I like the Geomancer’s outfit as it has a modern style to it.  The cliffhanger was also decent as I am wondering what exactly “it” is and how will Gilad fare against it.  Once again the artwork by Lupacchino was fantastic.  I enjoy how she switches up her angles from panel to panel, which really helps with the storytelling.  She drew some very good emotionally intense scenes and she can really do comedy.  It takes talent to be able to go from serious to light-hearted in a snap without making the transition seem awkward.  I hope that she stays on this title for a while because her style suits this comic perfectly.  Milla’s colours were very good and I really liked the effect of the code/equation floating in the air surrounding the characters.  I also have to give props to Guillermo Ortego’s inks as they complement Lupacchino’s art very nicely.  This was my favorite book this week.

There wasn’t anything that bothered me in this issue.  So instead here are some of my basic thoughts in Haiku form.

It was well written

The art work had me smitten