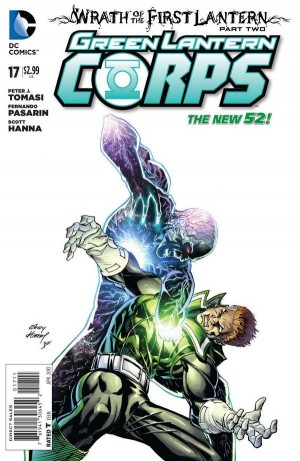 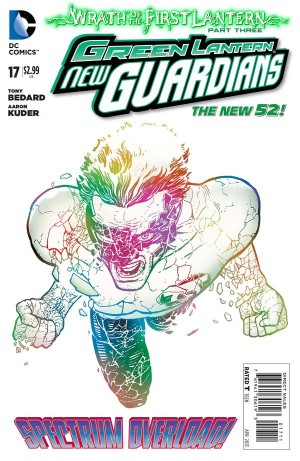 Part Two:  Guy awakens with various versions of himself only to find himself in the clutches of the First Lantern (Volthoom).  Volthoom goads him by telling him how unimportant he was as a child.  He then recalls a near tragedy as a child and then Volthoom provides a different scenario for how that played out.  The difference in outcomes provides different reactions from his family, which does have an effect on Guy.  Volthoom then moves forward in time and replays the situation that got Guy removed from the police force.  Guy continues to resist him and Volthoom replays the incident that caused him to become a Red Lantern during the Blackest Night.  Volthoom creates a reality where Guy loses complete control as a Red Lantern and then Guy is surrounded by his past mistakes.  This finally begins to break down Guy’s resistance and he realizes that Volthoom is indeed beginning to rewrite reality.

Part Three:  Kyle awakens back home on Earth with Volthoom holding him prisoner.  Volthoom decides to begin with the tragedy that affected Kyle during his earliest days as a Green Lantern.  Kyle is allowed to play things out differently and is ecstatic to have this individual alive once again.  In this reality he finds out that he gave up his Green Lantern ring and now he vows to ensure that life will become happier.  This confuses Volthoom as he changes reality once again to make Kyle in a completely different upbringing, but is met with similar results.  Kyle is then confronted with a different scenario with the Sinestro Corps War where Hal never came back from the events of the Final Night.  Volthoom then provides Kyle with a choice as to what reality he wants and Kyle is willing to make a sacrifice.  Volthoom then tells him what his plan for Kyle really is.

It was interesting to see more of Guy’s childhood because it does help to show why his relationship with his father is so fractured.  The Gardner family dynamics are pretty much unchanged from the earlier days.  I was also unsure exactly what got Guy kicked off of the force and it was good to finally find out what occurred there.  Guy’s reaction during this incident also provided him with more depth.  He made an incredibly hard decision and was repentant about it.  For the past few years he’s been portrayed as being all blustery and a total hardass.  I do enjoy seeing him in his days prior to becoming a Green Lantern.  I also enjoy how defiant he is and even though he is completely outmatched and that doesn’t stop him from verbally attacking Volthoom.  Even though it was brief and an alternate reality, it was nice to see Soranik again in consecutive GLC issues.  The art team did a decent job overall and I enjoyed the double page spread at the beginning.

The first thing that was mentioned was the Third Army and it was just a quick blurb…hopefully that’s the last we’ll hear of it.  It will now be referred to as the “Event that shall not be named.”  One thing that I really enjoyed in this issue was Kyle’s unrelenting positive attitude.  I liked how frustrated Volthoom was getting with Kyle because he had so much difficulty getting under his skin.  It was also nice seeing this early tragedy playing out differently even though it was brief.  It’s always been one of those things I didn’t like.  The highlight of this issue though was seeing how positive and sacrificing Kyle’s nature is.  He was once the torchbearer (well that’s been erased now, but I still count it as happening) and he had no problem stepping aside for Hal when he returned.  This is touched upon in this issue as well and it just helps to make Kyle such a strong character.  Also, if anyone were able to harness the power of the emotional spectrum it would be Kyle plain and simple.  It was also nice seeing Kyle’s Green Lantern outfit prior to him becoming Ion.  That one was my favorite version.

Doug Mahnke’s rendition of Volthoom should be the version that everyone else emulates.  I didn’t care for his appearance in both GLC and NG.  Even when he was still imprisoned by the Guardians he looked much more imposing…his physique and movements just looked kind of awkward.  It was even more noticeable with having just read Green Lantern before these issues.  So even though it was kind of neat seeing the past versions of Guy it did bring up even more continuity issues.  And speaking of continuity issues, the reality where Kyle’s upbringing differs made me even more confused.  The second time I read GLC I actually enjoyed it more.  Part one of Wrath of the First Lantern had so much going on with so many questions leading into the rest of the story.  This made me disappointed because this issue slowed the pacing down significantly compared to the first part.  However, the second read made me appreciate it a bit more as it did flesh out more of Guy’s past.  One thing that I was wondering about was Volthoom’s plan when Guy was a Red Lantern.  He mowed through so many people way too easily.  If he wanted to work more on convincing Guy that reality was changing why wouldn’t he make a more realistic scenario? Perhaps just having him kill Kyle or something in order to break his spirit down…something that is much more achievable and more capable of getting into Guy’s head.  I groaned when I read that the next issue of GLC will most likely be doing the same thing just with John and Fatality this time around.  Yay.  So over in NG I also do not like Kyle’s physical appearance.  His forehead is too big and his face just looks off.  At the beginning of the issue he was the ugliest toddler of all time.  I hope that there is a point to Kyle mastering the spectrum coming up further in this storyline.  The first two realities for Kyle though just reminded me of what a mess his continuity has become.  DC has endured so many problems with continuity over the years, which have required various reality-altering events in order to try and address them.  However, it is kind of infuriating that they are committing some of the same mistakes all over again.

Green Lantern Corps:  Buy It.  Green Lantern New Guardians:  Borrow It.  Guy’s character continues to grow and even though I liked Kyle’s response to Volthoom, it’s just so frustrating to try and understand what’s going on with his continuity.  The basis for this issue of New Guardians was essentially the same as what happened over in GLC and I just thought that the execution was better overall in GLC.  I understand that these parts are about Volthoom gaining the power needed to push the story forward, but I’d prefer not to feel that I was basically reading the same story.  I’m not faulting Bedard on this either, it’s just the way that this whole Wrath storyline was structured.  I’m sure that the “Holy Crap” moments will be more equally distributed amongst the titles as the storyline progresses.  Last note though, wow if there was ever a storyline with little to no payoff it was the Story that shall not be named.  So did all of the converted people just die off? If the entire universe was going to be converted in less than a month that would equal a catastrophic loss of life…it seems to be overkill for a story like this.