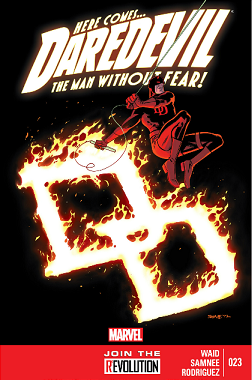 This review is going to be very short.

MARK WAID IS AN EVIL, TERRIBLE PERSON!!
That is all you need to know. See you next week for another review.
.
.
.
.
.

Uhm. Well. This is awkward. I’ve been told by my editor that I am contractually obligated to provide some actual content to Comics Nexus, so that review just ain’t going to cut it. Kind of strange, since I don’t remember signing any contracts, but that’s just the way things are.  Pardon me as I wipe away my tears and get back to work.

Summary (contains spoilers): In the last issue, Foggy Nelson revealed to Matt Murdock that he might have cancer. Like poor Matt’s life didn’t suck enough…

At first it seems like this issue is starting with a retelling of Daredevil’s origin, but in a brilliant swerve we find out that instead someone is looking to recreate Matt’s origin by throwing several convicts in front of toxic waste filled trucks just to see what will happen. As you can imagine, the results aren’t pretty… 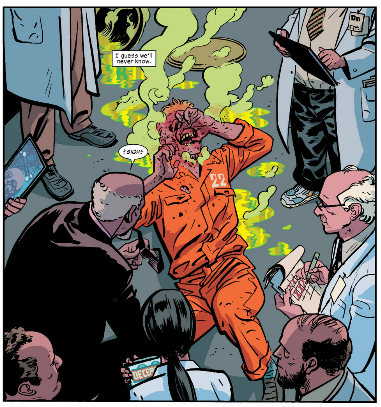 Meanwhile, Matt is doing everything possible to give Foggy some adventure and excitement while they wait for his test results to come back. He even swings him around the city via his billy club. Their fun is interrupted when several of the “experimental Daredevils” have crashed a fundraider of a mayorial candidate. Matt leaves Foggy to take care of business.  Matt immediately recognizes the smell of the same toxic bath that created him. The wannabe’s have his same radar senses, but not his experience, so he’s easily able to take advantage of their enhances senses to take them out.

The next morning, Foggy is at the Doctor’s office, expecting that Matt’s work as Daredevil will make him miss the appointment, but Matt arrives just in time. The issue ends with the Doctor’s heart rate elevating and just him saying “I’m sorry” as the comic fades to black.

Review: From the great twist in the opening sequence, I knew this issue was going to be one hell of a ride. There is a lot going on in Daredevil’s life, and Waid takes advantage of each panel to pack a lot into this issues  You get the interesting story of a villain targeting Daredevil specifically, and the emotional impact of his friendship with Foggy. I am really hoping that Foggy’s illness is part of this massive anti-Daredevil conspiracy.

The opening and closing were just about the most perfect comic pages I have ever read. I loved the way the opening blind sided me (ouch, that was not an intentional pun). And the end with the mostly silent panels with close up on the deep emotion on the characters, and then the fade to black, just hits hard. The whole comic was great, but every time I think of this issue, I can’t help but focus on how strong it began and ended.

The “villains” of this book was a real inspired idea.  I admit that the first time I read this issue, I was so blown away by the ending, that I didn’t consider the ramifications of everything we learned in this issue.  I am really curious how someone knows the conditions of Matt’s origin so well, how they have the access to create this kind of massive conspiracy, and perhaps most importantly, what is their grudge with Daredevil.  While Waid has been telling a lot of basically self-contained stories with Daredevil, there are a lot of intriguing threads that keep coming up, showing there is a grand design at the heart of this series.

One thing artist Chris Samnee has brought to this book is frenetic action.  Every scene in this book is just packed with things going on.  I especially loved when the knockoffs were rampaging at the fundraiser. It was hard to decide what to look at first, with so much going on in each panel. I was reminded by some of Keith Giffen’s work or Sam Keith, two artists that I always list among my all time favorites. 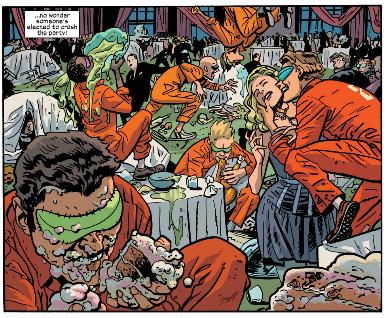 At the same time, Samnee was also able to pack in a lot of emotional impact. Waid’s story and script really needed an artist who could ring every last emotion from each panel, and Samnee was definitely up for the task. Really the whole design team for this issue deserves a ton of credit; the art, coloring, lettering, and terrific use of shadow creates a definite mode throughout this book that amplifies Waid’s brilliant writing. 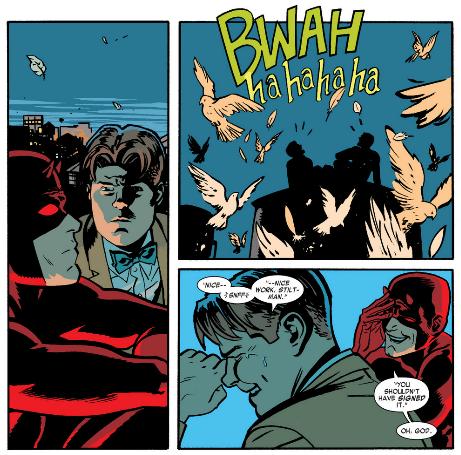 Wow, this review was pretty good therapy. I still am pretty worked up by the ending, but that is what a good comic should do.  Mark Waid is an evil genius, and Daredevil is just another strong argument for why Waid is one of the greatest comic writers of all time. Might as well just gift-wrap a few more Eisner awards for Daredevil and Mark Waid for next year.  If Daredevil #23 doesn’t win something, there really is something wrong with the Eisner voting.  HIGHLY RECOMMENDED!

Final Score: 9.5:  Pretty much perfect synergy between great writing and a terrific art team that can just cause the reader to laugh, cry, and sit in stunned silence. Daredevil is everything I love about superhero comics!