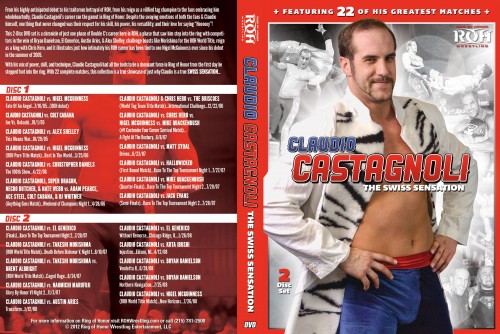 For an easy to navigate archive of my ROH reviews, just visit RetROH Reviews!

The current WWE United States Champion Antonio Cesaro is another of the many superstars that have passed through the Ring of Honor. Then known as Claudio Castagnoli, the muscular Swiss superstar competed against the best ROH had to offer and carved a niche for himself with his unique move-set and his ability to work both as a heel and a babyface. The recent two-disc DVD set Claudio Castagnoli: The Swiss Sensation, presents 27 of Castagnoli’s most important moments and matches from his debut in 2005 up to the summer of 2008.

Castagnoli made his much heralded debut at Fate of an Angel in July of 2005, and made an impressive showing in a losing effort to Nigel McGuinness. His next match wouldn’t come until October at the gigantic Joe vs. Kobashi show, when Castagnoli again impressed with an upset victory over Colt Cabana. He resumed his battle with McGuinness, now the ROH Pure Champion, with a non-title victory at Enter the Dragon. Before he received his shot at the title, Castagnoli put on an amazing technical display with Alex Shelley at This Means War as the two wrestled to a 20-minute time limit draw. Castagnoli received his second shot at McGuinness’ title at Final Battle 2005, but was outsmarted and ended up getting disqualified. The feud culminated at Best in the World in March, when McGuinness soundly defeated Castagnoli to retain the title.

Castagnoli then found himself embroiled in two major angles at The 100th Show. He lost the opening match to Christopher Daniels, who was once the biggest heel in the company for refusing to shake hands and follow the Code of Honor. Daniels defeated Castagnoli in the opening match and then made ROH history by shaking hands for the first time. Later in the show Castagnoli would shock everyone by turning his back on ROH and siding with CZW in the six-man tag team main event pitting Chris Hero, Necro Butcher & Super Dragon against Samoa Joe, BJ Whitmer & Adam Pearce, giving CZW the all-important win and turning the momentum in their favor. The following week at Weekend of Champions Night 1, Castagnoli teamed with Super Dragon, Necro Butcher & Nate Webb to defeat Adam Pearce, Ace Steel, Colt Cabana & BJ Whitmer in a violent Anything Goes Match.

At the conclusion of the CZW war, Castagnoli and Chris Hero hung around ROH and formed a unit known as The Kings of Wrestling. The duo quickly captured the ROH World Tag Team Titles from Austin Aries & Roderick Strong in an excellent match at Glory by Honor V Night 2 and would hold the belts for just over two months. The team would disintegrate during the final weekend in December after two matches with Jay & Mark Briscoe. At International Challenge Hero and Castagnoli got the victory with the help of the debuting Larry Sweeney. The next night at Final Battle 2006 the Briscoes evened the score. After the match, Sweeney blamed Castagnoli and fired him, setting off a year-long feud between Castagnoli and Hero. Oddly, the only match of the feud represented here is an admittedly awesome four-way between Castagnoli, Hero, Nigel McGuinness, and Mike Quackenbush at A Fight at the Roxbury, where Castagnoli got the victory.

Castagnoli would then embark on a series of acclaimed matches with smaller competitors, as he meshed with the high-flying style so well. He defeated former partner Matt Sydal in a tremendous match at the Driven pay-per-view, and then got by Hallowicked in a first-round match at Race to the Top Tournament Night 1. The following night at Race to the Top Tournament Night 2, Castagnoli successfully navigated his way through Mike Quackenbush, Jack Evans, and El Generico to win the tournament and earn an ROH World Title shot. Castagnoli took this shot at Death Before Dishonor V, Night 1 in a losing effort to the monster Takeshi Morishima. He received another shot at Morishima along with Brent Albright in a three-way elimination match at Caged Rage, but Morishima once again emerged victorious.

Undaunted, Castagnoli continued to ply his trade against the best ROH had to offer. Castagnoli defeated Naomichi Marufuji at Glory By Honor VI Night 2, and got by Austin Aries at Transform. He met El Generico in a rematch of their Race to the Top tournament finals at Without Remorse, and this time they wrestled to a 20-minute time limit draw. He then defeated Japan’s Kota Ibushi at Injustice before embarking on a feud with Bryan Danielson. The two traded victories, with Castagnoli capturing the first match at Vendetta II in Chicago and then Danielson winning their next bout at Northern Navigation in Toronto. This DVD concludes with Castagnoli unsuccessfully challenging Nigel McGuinness, this time for the ROH World Championship, in an excellent match at the New Horizons pay-per-view in Detroit.

Claudio Castagnoli is one of the more unique performers to come to prominence in Ring of Honor, and this DVD set is a good targeted look at his development into the star we see on TV today. Since this set cuts off in the middle of 2008, I would expect another set to be released at some point, but this is a great overview of the first few years of Castagnoli’s time in Ring of Honor. I enthusiastically recommend this set, and you can purchase it at the ROH Shop.