A2Z Analysiz – Nigel McGuinness: In It To Win It 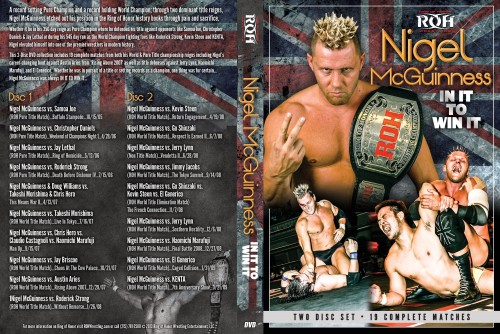 Several months ago ROH released a great two-disc DVD set titled “Nigel McGuinness: An ROH Career Retrospective”. This 13-match compilation was accentuated with stories and comments from McGuinness himself, and that made it a very fascinating DVD to watch. Also it behooves me to mention that the match selection was outstanding. Now comes the sequel, “Nigel McGuinness: In It To Win It,” 19 more matches from one of the greatest ROH World Champions of all-time.

This set is more straight-forward than “Retrospective,” as it just presents matches, but McGuinness had so many good ones that even with the 45 matches presented on his three DVDs (also including “Bryan Danielson vs. Nigel McGuinness: The Complete Collection”) there are still more great matches on his resume. “In It To Win It” covers both his Pure Title and World Title reign, and other matches in between.

We begin with McGuinness already as the Pure Champion, having defeated Samoa Joe on August 27, 2005. Joe didn’t get his rematch until October at Buffalo Stampede. McGuinness was able to triumph once again, becoming one of a select few to defeat the great Samoa Joe in consecutive matches. The Pure Champion was also able to retain his title over Christopher Daniels via countout at Weekend of Champions Night 1, Jay Lethal at Ring of Homicide, and Roderick Strong via countout at Death Before Dishonor IV, all excellent matches.

After dropping the Pure Title and finishing his nasty feud with Jimmy Rave, McGuinness set his sights on ROH World Champion Takeshi Morishima. McGuinness teamed with fellow Brit Doug Williams to defeat Morishima & Chris Hero at This Means War II in an excellent main event match. Unfortunately McGuinness would lose his first title match with the Japanese monster, in Tokyo at Live in Tokyo. Luckily for McGuinness he would rebound and win a terrific Four Corner Survival match at Man Up! over Chris Hero, Claudio Castagnoli, and Naomichi Marufuji, and was soon after the new ROH World Champion.

McGuinness was out to prove that he was the best wrestler in the world and wanted to take on the best ROH had to offer. Title matches were coming quickly, and he defeated Jay Briscoe in his first defense at Chaos at the Cow Palace, and soon after defeated Austin Aries in an amazing match at the Rising Above 2007 pay-per-view. He also got by Roderick Strong at Without Remorse in a tremendous bout.

As the title reign rolled on more challengers came to the forefront. One of McGuinness’ toughest challengers was Kevin Steen, who challenged for the gold on multiple occasions. All of their matches together were good, but McGuinness looked especially strong in their match at Return Engagement. McGuinness continued his string of success by besting NOAH’s rising star Go Shiozaki at the Respect Is Earned II pay-per-view, and sneaking past Jerry Lynn in a non-title match at Vendetta II.

McGuinness had a better trip to Japan than the previous time when ROH returned in September 2008. The Champ was able to defeat Jimmy Jacobs at The Tokyo Summit. Two months later McGuinness won a four-way elimination match over three of his toughest challengers to date – Go Shiozaki, Kevin Steen, and El Generico at The French Connection. McGuinness closed out the year with fantastic title defenses over Jerry Lynn at Southern Hostility and Naomichi Marufuji at Final Battle 2008.

As 2009 rolled around, McGuinness’ injuries were piling up and his body was breaking down. Even so, the Champion forged ahead with guts and fortitude, continuing to defend his title. He got by El Generico for the fourth time at the Caged Collision pay-per-view, and then made his final successful defense against the very dangerous KENTA in an awesome match at the 7th Anniversary Show.

My good friend Kevin Ford compared this to the WWE’s recent Bret Hart “Dungeon Collection” and that would be a pretty apt comparison. Many of Nigel’s biggest matches are on his first DVD or the Danielson vs. McGuinness set, and this one contains some big matches too but also some hidden gems. It’s amazing to look at the list of people Nigel had great matches with while World Champion – Roderick Strong, Kevin Steen, Go Shiozaki, Jerry Lynn, El Generico, Jay Briscoe, Naomichi Marufuji, Austin Aries, KENTA – and the list goes on. “In It To Win It” is a stellar collection of matches and a must own for any fan of Nigel McGuinness. You can purchase it at the ROH Shop.