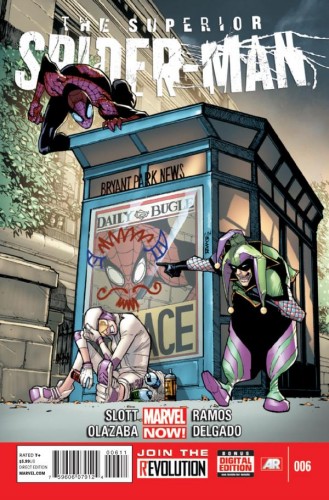 The Superior Spider-Man book was always going to be different than Spider-Man. It’s a villain usurping a hero’s identity and twisting his ethics and methods to suit a heroic agenda that still manages to be self-serving and maniacal. After the last two issues of Superior Spider-Man forded into decidedly darker directions, I was looking forward to some lighter fare. Issue six of the Spidey-switch sees things really boiling over, but to Dan Slott’s scripting credit, we have a book that unmistakably feels like Spider-Man.

And at six issues deep into the story, Slott knew it was time to start answering the questions fans have been asking since Superior Spider-Man was just a rumour. How can friends and family not see something is off about Peter? How do his allies and antagonists not feel something is amiss with a webhead who doesn’t crack jokes and is getting more vicious by the day? How long can the charade go on?

It is now time to ante up and address it. While this is the best issue yet for several reasons, at times it feels like Marvel is working against itself to make this story all it can be.

“Not so funny now when it’s at your expense?”

Screwball and Jester are two criminals who have seemingly found a new calling, just like Otto. They run a reality web series pulling guerilla pranks on New Yorkers, and they might have succeeded at it if they didn’t raise the stakes with Mayor J. Jonah Jameson. When a pie and a pantsing embarasses the mayor, his friendly neighborhood pal Spider-Man is summoned to hunt them down.

Spider-Man agrees to do so, but only after a perverse twist in logic. From here the theme of the issue and the entire series hits the ground running: We’ve seen before how Otto Octavius has a very strong opinion and reaction on bullying, but before he was merely playing the role of Spider-Man. The role of Peter Parker, however, has been lacking to Otto, and he has since enrolled in college to finish Parker’s doctorate.

Having made friends with his tutor Anna Maria Marconi, Otto agrees to meet with their professor, who is actually a schoolboy rival from Otto’s school days (keep up with me). Anna is also a victim of bullying on campus, and this infuriates Otto – in the depths of Doc Ock’s mind, Peter Parker experiences some more of Otto’s childhood experiences. Anna is able to cope with the bullying in a more healthy and confident way than Otto and even Peter ever had. While this impresses Otto, he finds himself wanting to impress Anna in turn, and more conflict arises as he swallows his pride and deals with his hated former classmate.

It is here Otto nearly understands Peter Parker, but for the wrong reasons: “I’m beginning to understand the real reason Parker donned his tights…so he could take all his frustrations out on other costumed freaks.” So close, and yet so far. And it’s Otto’s undoing.

Meanwhile, the Avengers are discussing Spider-Mans turn to the serious. He’s savagely beaten every one of his foes and recently taken a life. It’s Wolverine who has the best line in the issue, if only because it underscores the current Avengers:

“You tell me. Who here doesn’t have blood on their hands? I look around this table and y’know what I see? A bunch a’ spies, soldiers, and killers. We’ve all done our fair share of “avenging”, but now we’re gonna hold Spider-Man to a different standard?”

In one page Slott gives us other heroes calling this Superior Spider-Man out, sets up the conflict to come, and provides a rather clever and damning commentary on Earth’s Mightiest Heroes. I like when we’re reminded how smudged Marvel’s morality scale can be.

When Jester and Screwball target Spider-Man for their biggest clickbait yet, they realize that the Superior Spider-Man is not their old playmate. Or at least that he’s far too serious. As they roast and embarrass Otto, his quiet fury takes over for the second time this day.

And it’s all caught on livestream, broadcast everywhere from Mary Jane’s bar to the Avengers’ monitors. With that, the Avengers make a decision.

“It’s the Internet, kid. There’s no points for subtle.”

This is the best issue of Superior Spider-Man yet. It feels more like Spider-Man than ever for a while. We have the villains, banter with Jameson, and humour. We have a thematic moral tying the superheroics to Parker’s quandary of the day. Except it’s all wrong.

With Otto in Peter’s life, Peter isn’t choosing between the responsibility of being Spider-Man and his new friendship with Anna. It’s Otto choosing to leave becase he desires to humiliate and punish Jester and Screwball just as Spider-Man and others have humiliated him. There’s even a nice bonding moment between Ock and Jameson, even if it’s kind of crooked.

Where Peter’s Spidey would be looking to protect citizens from the pranking duo because he knows what it’s like to be publicly shamed, Ock’s Spidey is actively looking for retaliation against all the times – irony – Spider-Man has bullied him. And if you know Spider-Man and his jokes and the little contact high Parker gets when outsmarting his foes, the best part of all this is that Peter’s hands aren’t truly clean in all this. Slott worked this, and I have to imagine this is the lynchpin of his pitch.

Yet, Ock has the classic Spider-guilt, since he’s close to Anna, and that spark of humanity in him prevents him from being irredeemable. In fact, some people might find some solace in the little revenge fantasy of taking out your detractors…except Ock actually does it, without remorse. More than any other issue, we finally see Otto’s take on Spider-Man as more than just a villainous Freaky Friday.

I just wish it didn’t take so long to build to this, and coming on the heels of last issue’s execution, it seems paced slightly off. The Avengers scenes and insight into Otto’s mind makes up for it, and after a slow start to the series, everything is paying out and paying large.

Humberto Ramos has earned his webs as an iconic Spider-Man artist, and he’s in top form. There’s a lot of storytelling and a lot of nuances going on, and he conveys it all cleanly and smoothly. His larger than life exaggerated momentum and expressions work well for the range of fun and seriousness this issue crams in.

Victor Olazaba’s inks are pristine. The bold and fluid lines could finish the art by themselves.

I would love to see Ramos and Olazaba tackle an Avengers book soon; the page and a panel here weren’t enough. Seriously.

With Edgar Delgado on colors, the package can only get sweeter. As before, he’s really letting his colors pop, which suits Ramos’ bold style. He has some fun during a Doc Ock flashback and in the Avengers scene, although there isn’t as much playing around with contrasts as in prior issues. There isn’t too much to play with, given the settings in this issue, but he makes NYC’s spring look brisk and clear.

If you still haven’t been sold by the concept, this is the issue to grab. The build up was glacial, but it’s all proving to be worth the weight. My only concern is that Marvel has shown their hand by soliciting the end of the series, which takes away some of the magic. Still, if it was done right, and by right I mean acknowledging how well networked the Marvel Universe is, it couldn’t have laster for too long, and now that we’ve addressed that, all that’s left is for the climax…Which means it was done right.

Sadly, we’ve already seen Peter in Age of Ultron, and even comic fans can only suspend disbelief about their favorite character relationships and continuity for so long.

Still, this has been a damn fine Spider-Man story. And no, I didn’t expect that a few months ago.