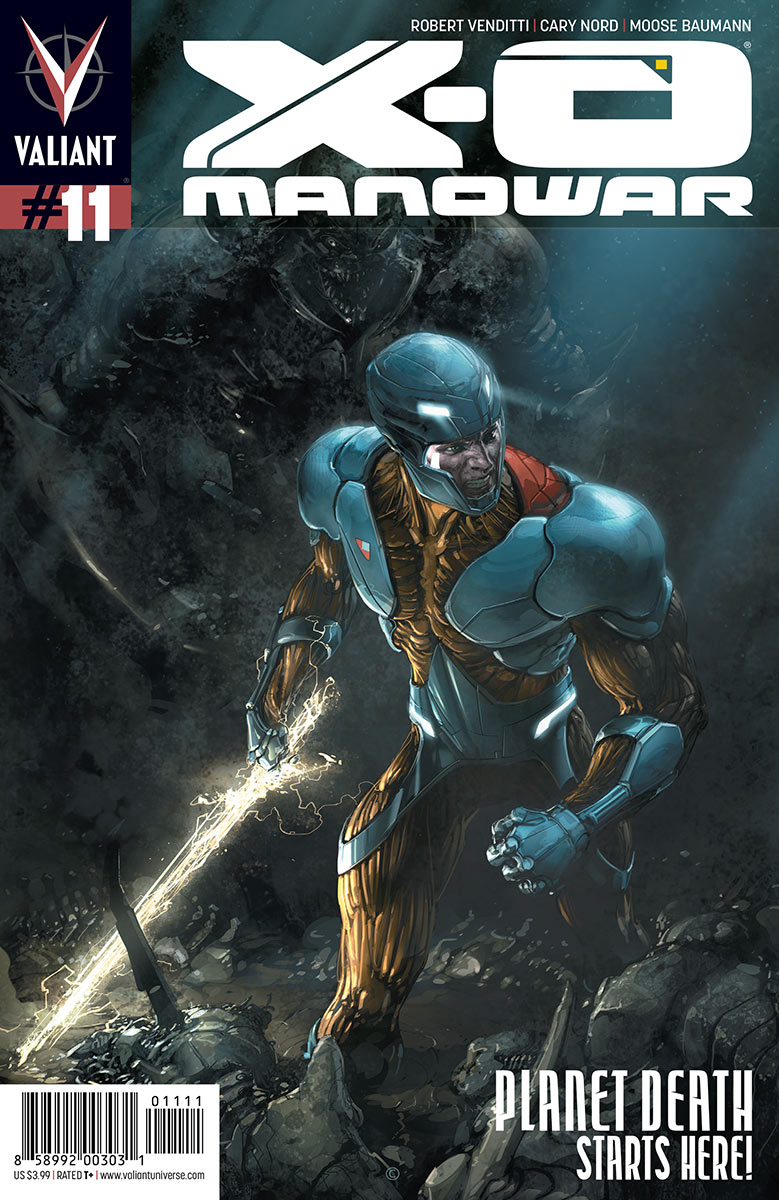 This issue begins with the history of the Vine and how Shanhara (X-O armour) came to be.  It is also revealed why the armour is so revered by some as it has ties to the history of their world as well as their conflict with another race called the Torment.  X-O suddenly storms in on the Vine homeworld and begins to carry out his brand of justice.  He also encounters and remembers the priest who takes a surprising stance with what X-O is doing.  The battle rages on and the Vine throws a lot his way, but X-O continues to fight back.  Afterwards X-O intends to continue his mission to destroy the world of the Vine.  However, the priest reveals some startling information that may just change his mind.

This was another great issue.  The reveal at the end of the book completely hooked me and actually makes this arc much more compelling.  I enjoyed how the Vine were given a lot more depth this issue and have transcended the simple role of “enemy alien race.”  The history at the beginning of this issue was very interesting and did a lot to explain the division amongst the Vine regarding the X-O armour.  The battle scenes were easy to follow and I liked how the action took a backseat to other aspects of the story.  Going into this arc I thought that this would end up being wall to wall action, but it’s turning into something much more.  One issue in and the conflict has become much more complicated and I’m really looking forward to seeing where this is going.  The history of Shanhara was well done and I enjoy the parallels it draws with modern society.  I wasn’t anticipating this issue as much after the previous one because I was bummed out that Gafti died…again.  However, this issue surpassed my expectations.  Venditti has been doing a good job of humanizing Aric’s struggles and reminding us about the tragedy behind this entire conflict.  The biggest highlight for me this issue was the return of Cary Nord to the art duties.  Damn can this guy ever do interiors and his involvement makes this arc feel more important.  Hands down he is one of the best in the business.  Baumann does another solid job this month and his work has really helped to make this book look consistent with the different artists.  This was a really good read this month.

I was a little bit on the fence about how harsh Aric was with the priest.  The priest is not opposing him in this issue and Aric was ready to behead him nonetheless.  However, he is raging and ready to destroy a planet so I suppose this reaction is to be expected.  There wasn’t really anything to dislike though in this issue because the whole team is firing on all cylinders here.

Buy It.  This book is picking up some serious steam again.  I admit to not looking forward to it as much because I thought it was going to be an action packed story of revenge.  However, this issue proved me wrong.  The fact that this title as well as Harbinger comes out in the same week makes it the best new release week period.  I cannot wait to see what Aric does next issue and what the implications of the reveal will be.  Pound for pound Valiant is the best publisher out there right now.