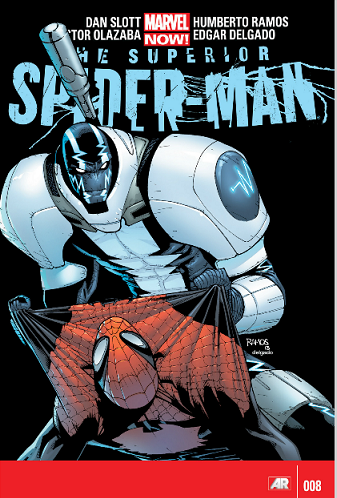 Maillaro: It’s kind of hard to believe that issue 8 is already out. First column we did was Amazing Spider-Man 700. I know that with Marvel’s release schedule that isn’t quite as long as it should be, but I definitely didn’t think it had quite been that long yet.

I guess it’s time to check back in with that whacky Doc Ock and see what vile things he does to Spider-Man’s body this time.

Full disclosure going in to this review, I think Cardiac is an awesome character with a lot of potential, so the fact Slott used him here and used him so well definitely makes me very biased towards this issue.

Weaver: Man, it is a pretty fast release schedule. On one hand, I like that, since I always saved up five or six issues to read in a row, on the other hand…this is a little too fast.

I’ve never felt strongly about Cardiac, but he really made this issue. I like where Superior is going right now, and I look forward to next issue’s battle between Spider-Man. I also liked a moment that’s now becoming pretty common in Marvel…shout out to Giant Man.

Maillaro: Well…I think they owe Pym one. They did kill Pym in Age of Ultron 6….which I guess would be spoilers, except for the fact he is solicited to appear in Avengers A.I. after Age of Ultron ends, so it is pretty likely it doesn’t stick all that long. I am just sad he didn’t get to kick Wolvie’s ass…But that is getting a little far from the book we are reviewing. Sorry!

I always liked Cardiac because he was a vigilante with a true cause. He really is trying to help people…and doing it in the worst possible way. There is just so much conflict within the character, and I love seeing how other heroes try to deal with that. Last issue, when Spidey went off on trying to take down Cardiac hard, it was a bit of a shock because most of the time heroes treat Cardiac with kid gloves.

Reading this issue, I think I sort of figured out what the “next evolution” of Superior Spider-Man is going to be. I suspect we will get several issues with Peter as the dominant personality and Doc Ock doing the ride-along. When Doc Ock mentions that Spider-Man always loses at first, but comes back strong to snatch the win in a second encounter, I thought that was massive foreshadowing!

Weaver: I would have paid good money to see Pym beat up on Wolverine. It’s not wholly unprecedented, either…he has beaten plenty of heroes. Black Panther, Cap, Iron Man…anyway.

It’s not just how the heroes deal with it…several times in this issue we see that even the people Cardiac has recruited to help him as civilians are a little twitchy about aspects of what they’re doing. I think Slott does a great job painting it all in massive grey areas, because even at the beginning there’s mention of the procedures Cardiac and crew are doing are considered dangerous, etc etc…and then it drops in the “too expensive” note. I liked how Ock of all people could understand what Cardiac was up to more than the heroes can, and in doing so got a huge hero moment. 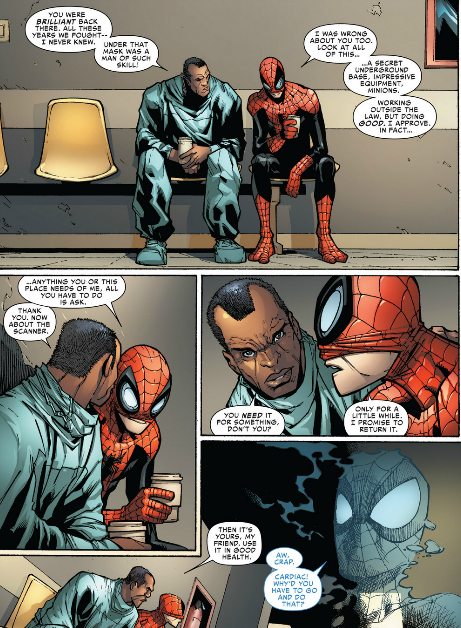 All I’m saying is that I look forward to the Amazing vs. Superior fight. You may have it figured out, and since we sort of predicted that back when this started I think it’s definitely possible, but now I’ve bought into the “journey” as well rather than just the end result.

Maillaro: Yeah, that has been my argument all along for this story: it is very likely it will get back to status quo eventually, but that doesn’t mean I can’t enjoy the ride. And Slott really has managed to make some strong stories out of this arc.

The way Black Widow justified Spider-Man’s recent actions and behavior changes was actually damn logical….I have to admit, I had sort of forgotten Silver Sable died during Ends of the Earth. I would have liked them to play up that aspect a little bit more, especially since Doc Ock later saw that his actions during Ends of the Earth had affected people in ways he just never considered. This could have been a great parallel, but it just never came up. 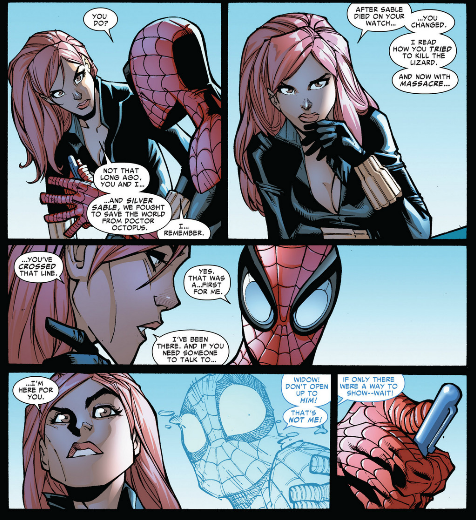 Weaver: I actually liked the Avengers scene a lot, especially with Black Widow. However, something I was wondering there…the “red in the ledger” line. When she used that in the movie, it was to con Loki. In fact, that whole conversation felt a lot like a con game on Widow’s behalf to me. I think she knows something’s up, but doesn’t want to reveal until she’s sure. She was also the hero that figured out the Thunderbolts. That was a great issue.

One thing I didn’t like here was the art…Captain America in particular looked goofy, and during the big confrontation it seemed like characters were just strewn all over with no rhyme or reason. It even looked like Logan was about to skewer Spider-Woman. 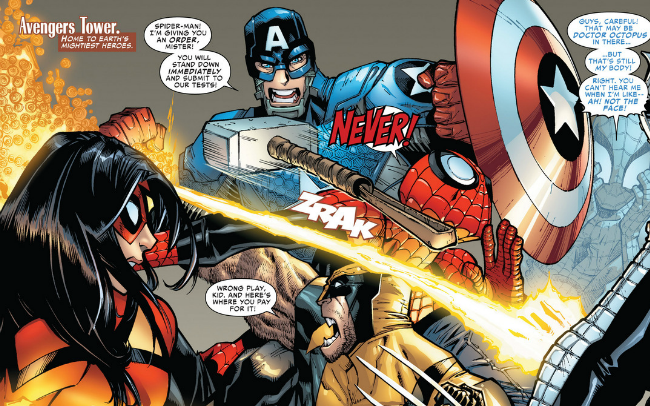 Maillaro: While it might be possible, it seems to be that if Widow suspected something was up, she wouldn’t just let him free to the world to do whatever he wanted. I think you might be looking a little too deeply into that scene.

Not gonna lie, I am so used to Humberto Ramos’ art on Spider-Man disappointing me that I didn’t even give it much thought this issue. I actually had to go back and flip through the issue again to look at what you were saying…and I totally agree with you. Lots of awkward layouts, and some really oddly drawn characters. I definitely think the art is one of the weak parts of Spider-Man the last few years. Between the rotating art teams, and the uninspired art like this issue, it definitely takes something away from how good the writing has been on Spider-Man for a long time now.

Weaver: She did let the Thunderbolts go after telling them that she knew exactly who each of them were…but she also said that she’d give them back alley spleen-ectomies if they did anything wacky, so…there’s that. I would just love to see one of the more crafty heroes figure out what Otto’s up to, especially since he gives them so little credit. But then again, I’m always a sucker for that. Hawkeye conning Thanos is one of my all time favorite Avengers moments.

There’s been a few good artists on Spider-Man too, that’s the shame. If they slowed this down to monthly, it could be perfect. Then again…there’s definitely reasons for a quick production schedule.

Maillaro: In terms of quality, it definitely beats four Spider-Man books with no connection to each other at all…but my wallet hates Superior’s release schedule and 4 dollar cover price. At least I could mostly ignore Web, Spectacular, and Spider-Man back in the day and stick to just Amazing Spider-Man. These days, it’s one Spider-Man book (two counting Avenging, which has been pretty good in itself), but coming out two or three times a month, so much harder to avoid.

I think it would be cool if you were right about Widow, but I just think they are leading towards Carlie Cooper “saving the day.”

Weaver: It could be a combination. Widow/Cooper team-up. I like small stories where a normal human saves the day…I know JJJ, Foggy Nelson, and even people like Flash Thompson have done it on occasion…Jarvis, Alfred, etc. But when it’s such a huge plot, let someone in tights be a part of it, please. Ultimately, they’re the ones we read the comics for, to be honest.

I think I agree completely with those scores. I’m tempted to dock Ramos a bit more, but I’ll be nice today.

Maillaro: That pretty much wraps us up for this week. Nice to be back doing these reviews with you. Some good books coming out next week, including Morbius, both Fantastic Four books, and Young Avengers…plus I have 700 new Marvel back issues we could dig in to!

Maillaro: I think that should be doable! See you then!