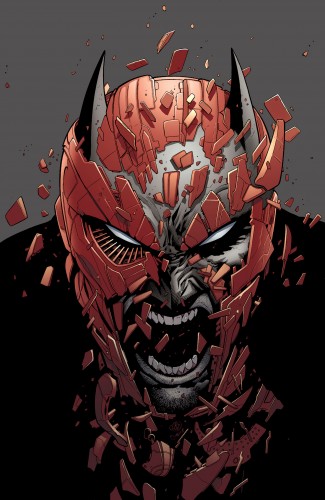 Batman has moved on from denial to rage as he copes with the loss of his son. This means finding people to take his frustration out on and beating them within an inch of their lives…but first, Carrie Kelly has arrived to see Bruce. She’s not exactly happy that she just got a major check and her favorite student has gone completely off the grid, and she shows no respect to Bruce at all. She’s been fired, and again, well compensated for the abrupt nature of it, but she wants to talk to Damian, she wants him to tell her why he’s not coming anymore. Bruce tells her he’s studying abroad, seeing the world, and living a life most only dream about. She’s smart though, and incredibly honest, she won’t even take the money she hasn’t earned yet. The dog loves her, Alfred doesn’t mind her, but Bruce simply can’t deal with having her about. Alfred gives her a job without Bruce’s knowledge, but something tells me he doesn’t have time to care right now.

Jason Todd is in the cave, having just gotten a clean bill of health after whatever the Joker did to him (don’t read Red Hood and the Outlaws, but he still has a face, so I have no idea). Bruce has a mission, and he wants to bring Jason along. In the early days of Batman Inc’s revival, Talia put a massive hit on Damian’s head and assassins from across the globe came to claim it. This particular group is based out of Ethiopia, and Bruce wants Jason to help him tear it down to the ground. The two bond over the violence, and Bruce reminds his former Robin that they are still family, and that Bruce will always be there for him no matter what. It’s a touching moment before Batman cripples a sniper, but it all makes what comes next that much more devastating.

Bruce takes Jason back to the place where he died. Not to help his former protege find closure, or get over some psychological hump. Nah, none of that, he wants Jason to remember how he came back so Bruce can do the same thing for Damian. Thus begins the Bruce and Jason fight we’ve all expected, with Jason furious that Bruce would bring him back to such a horrible place, with Bruce furious that Jason won’t do whatever it takes to bring back his son. He wants to see his son grow up, and that matters more to him than forcing Jason to relive the most traumatic moment in his entire life. The argument quickly escalates into a brawl, which ends well for nobody.

And then a classic Bat villain teases his impending arrival!

You know the moment where you can tell Bruce is ready to take any means to get his vengeance? When he tells Jason Todd where to shoot people instead of insisting he not bring guns. Batman who hates guns wouldn’t team up with someone dual wielding pistols.

I have no idea what New 52 Jason’s story is, as I do not read Red Hood. That said, I thought he was came back with a Lazarus Pit for some reason. Wikipedia tells me nothing, so I’m assuming that it hasn’t been covered? Someone please tell me if I’m wrong.

If Carrie shows up in every issue until this Batman and ______ bit ends, and then doesn’t become Robin, then what is the point of her? Also, if she does become Robin, isn’t that too obvious of a direction? Double edged sword….though I’d rather have someone obvious get the mantle than leave it abandoned. Batman needs a Robin, and not just because the book is called Batman and Robin, but because it’s the light to his dark. Leave Batman on his own and it’s so much easier to go completely grim and gritty, Robin gives you the chance to not make every book super dark.

Seeing Carrie on the path to being Robin, or at least a recurring supporting cast member, makes me miss Stephanie. Pretty much everything in the Bat line makes me miss her these days.

Well, this book is officially on my pull list.

Seriously, I need to get the first few arcs of this book, I gave up WAY too early.