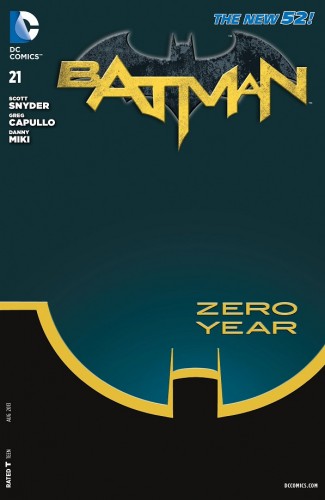 Six years ago Gotham City was an overgrown wasteland, a dead city where a child fishing is chased through the fields by men in a mask. Only for The Bat to show up and save him, and we the readers to learn that whoever did this believes Batman to be dead, and has been bragging about it since he destroyed Gotham. Just the way Batman likes it.

But this story takes place five months before that, not long after the events of Batman #0. With Bruce Wayne in a rubber mask facing off against the Red Hood Gang. With a truck full of men, and a small army worth of well dressed men in red helmets in front of him, he has to be a bit brave and bold, using a grappling hook and a giant pair of balls to pull a stunt that, for Batman, is no big deal…but it’s the first time Bruce Wayne has ever attempted such a thing. But whatever, he’s Batman, and he give the Bat-finger!

Not long after he’s in his lair, not quite a cave. more of a hidden room in a brownstone, but it’s Alfred’s home. Where Bruce is recapping and trying to figure out the Red Hood and his gang while also testing a pair of adhesive boots. He’s incredibly single minded, and it’s not long before Alfred illuminates why…Bruce Wayne is legally dead and he has no intention of changing that. He’s entirely centered on the mission and views his true identity as nothing more than a distraction to be cast aside. All that matters to him is making sure no one lives through what he did, and so long as only Alfred knows he’s alive, he thinks he can do that. So of course his uncle shows up, having never believed his nephew was dead, and finally having found him. But really, he just wants to talk and try to convince Bruce to return. To put a Wayne in charge of Wayne Enterprises, but it’s not what Bruce wants. Nice penny, though.

See, when he was a kid, Bruce’s father taught him a valuable lesson. That he could be whoever he wanted to be and his parents would still be proud of him, no matter what. Which may explain why he’s driving around Gotham with a briefcase full of rubber masks as he goes undercover trying to bring down the Red Hood gang. Philip isn’t please, though, and he goes to talk to his head strategist about how to handle things.

Mr. Nygma believes the answer to the riddle is killing Bruce Wayne.

It takes Gotham five months to go from Gotham City to Life After People? Alright, I’m intrigued. Both at how things got that bad, as well as how they improved. I imagine the plant overgrowth is going to be given the simple explanation of “Poison Ivy”, but at the same time, how awesome would it be if Snyder swerved in The Demon’s Head himself?

Man, Snyder is all about giving Bruce a family. For my entire lifetime Bruce was the sole survivor with two dead parents. Now he has a bastard brother and an uncle!

The censored bar over the Bat-Finger made me laugh my ass off. Totally not something deserving of a censor, but the giant sized bar just makes it comedic.

If Bruce is dead, and everyone thinks he’s dead, then how did he gets a secret pre-Batcave Batcave set up in Alfred’s house? is that Alfred’s house? Why does Alfred live in Crime Alley?

Any use of the Riddler is a good use of him…well, no, but recently there’s been some great stuff. Paul Dini kicked ass with him back in Detective Comics, and ever since Snyder expressed interest in writing him I’ve been waiting on the edge of my seat to read it. I love The Riddler.

With Zero Year we finally have a Batman arc that can’t be spun into a cross-line event that suffers from not actually being an event! Snyder has been desperately in need of telling his own story without having to let every other book fit into it, and unfortunately DC hasn’t allowed that thus far. The Night of the Owls was a great Batman arc that turned into a weak event as it was diluted across the line, and Death of the Family suffered the same fate. These weren’t events, these were Batman arcs that somehow had more tie-in issues than actual issues in the arc. Now the only way to do that is to try and shoehorn in other peoples origins. And I mean, come on, let’s be honest, in the birth of Batman there is no Robin. And there sure as hell isn’t a Batgirl.