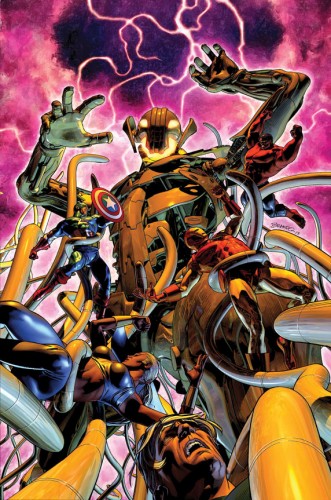 A few months ago Hank Pym gets some mysterious alerts while working with his lab, and winds up led to an empty hallways with an envelope in it. Sue Storm is invisible, having dropped it off, but that doesn’t matter. What matters is what’s in the envelope; a tablet with a video message from a much younger Hank telling him how to stop Ultron for good, and it all boils down to Avengers #12.1 by Brian Bendis and Bryan Hitch. Four pages of that are replayed, panel for panel, word for word, with new captions over them until Hank Pym calls Tony at the end to deviate the timeline. The Avengers still beat up the Intelligencia, the Space Knight still opens to reveal Ulron, but now Hank Pym is using Iron Man to put a virus in Ultron for him. Ultron still goes to make his escape, and things still go boom, but unlike the last time around, when the dust settles Ultron is still there.

So now we have a ragtag group of Avengers being tasked to keep Ultron busy slash not die long enough for Pym’s program to do its thing. Easier said than done, right? I mean, Ultron, adamantium, hates humans, loves the kill shot? Yeah, this is a brawl as he tries to slaughter the Avengers as his programming fights off the virus he can feel installing. His confidence radiates, he expects all things and is already taking the countermeasures to prevent Pym’s virus from opening his systems. He’s not going to submit now, not when he’s so close to his ultimate goals….but then his system shuts down completely. And Thor breaks him into tiny little pieces. Because Hank Pym has finally beaten Ultron once and for all, with a virus that did it’s job while tricking Ultron into pushing it through.

Wolverine and Sue Richards return from their time travel fuckery, happy to see the world as they remember it, and to have Nick Fury’s flying silver age car, but soon it doesn’t matter. Time ripples and shatters around them, heroes are shown with alternate versions from different times and realities, and May “Spider-Girl” Parker definitely cameos, but then Marvel NOW! appears over those images, and everything goes all shattery around Earth before everything looks back to normal. The space-time continuum is broken, apparently this being the straw that broke the camels back, and now everything is broken across worlds and realities and it’s all not very bueno.

Like, and here there be spoilers! Lots of SPOILERS! In fact, if you have somehow not seen these spoilers, you might just want to skip to the number at the end!

Miles Morales is swinging through New York when lightning strikes and he sees GALACTUS! DEVOURER OF WORLDS! The Mighty Marvel Version! Hunger #1 drops in July!

Then you’ve got Hank Pym and Tony Stark talking about AI and Hank gets a new idea and thinks he’s finally figured out what he did wrong! He’ll be leading a new team in Avengers A.I. #1 in July!

Then, finally, through a hole in the universe a redhead that will be familiar to fans of Image Comics in the 90’s comes through on a giant severed bloody head. Angela is pissed that she was brought here against her will, and she’s going to kill whoever did it. Or just the Guardians of the Galaxy when she debuts there…also in July!

So that’s why Marvel keeps pushing Avengers #12.1 as a freebie and must read. Eight pages of this book are taken exactly from that issue with new dialog and captions thrown on to show that things are slightly different. It also lets them give Bryan Hitch credit for something he drew two years ago.

I remember an interview a few months back where Joe Quesada said that, while he was drawing the final pages of this issue in an effort to keep the spoilers hidden, he denied that he was drawing Angela, or that she was the big ‘reason this book is polybagged’ surprise. So, low and behold, I get to the end of this issue, and what did Quesada draw? Angela. To end the issue. The real super spoiler is the David Marquez drawn Ultimate moment, but even that isn’t a super shocker. Nor is it the last thing you see in the issue, because, you know, Quesada draws Angela.

Seriously, there was a big deal that Quesada had to draw the last pages himself to prevent leaks from getting out, and we’ve known for MONTHS that Angela was that big surprise. Marvel needs to start locking down secrets already, because I’m getting sick of knowing how their stories end before the issues get released.

Is there a reason why Kang and Immortus can do so much crazy time travel crap that they ceased being one person and became two different people, but Wolverine completely shatters time and space for forever?

For a book called Age of Ultron, I think this was the first issue where anybody actually fought Ultron.

How long until Ultron is back?

The giant orb of that altered the shattered time space? Why do I feel like that was supposed to be a moment that led into Marvel NOW! with these images of things we’ve, for the most part, already seen intended to be looks into the future? Because they really look like time reassembling a new timeline over what we had before, mixing and matching and mashing up, but it’s not made clear at all.

So we’re supposed to care about Angela because she rides in on a gigantic decapitated head? What if a reader has, for example, never read or cared about Spawn? This spread to end the event is going to be lost on anyone that doesn’t have some nostalgia for Spawn, even with all the talk on the web over the past few months. I mean, seriously, her entire character is tied to Spawn, and Marvel didn’t get Spawn. They got a character that was killed off in that book, according to cross referencing, back in November of 2000.

So nothing actually happened but time is broken and we have to deal with the ramifications of nothing actually happening? I understand the nature of time travel and having to eradicate the events from ever happening, but there could have been some stress or tension somewhere in this book over the course of ten issues. Instead it felt like an overly violent and confusing amusement park ride with a ‘you must be at least this tall’ set at around four feet. We were led in a circle and the ride photos are showing boredom in the faces of all those who actually got on.