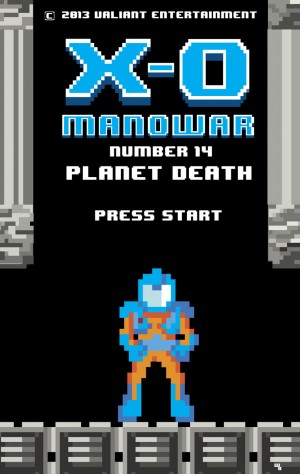 Aric is providing a speech to the other slaves in order to get them to join his fight against the Vine.  Meanwhile there is some dissention amongst the ranks of the Vine, which includes General Axil.  Axil and the Priest both share their views on Aric bonding with Shanhara (the armour).  However, those in the Vine Council have plans to take much more drastic action by using the Sky Array.  On the battlefield, Aric and his allies engage in a vicious battle with the Vine.  At the same time, the Priest is faced with some information about Shanhara and as the Council decides to make an exit, Aric arrives.  He then checks on the Priest and Dalgan as he decides on his course of action with the Council, which has repercussions with the Sky Array.  Aric later has words with the Priest as he decides upon a new course.

This was the pay-off issue for this arc and I was glad to see that it was anything but anti-climactic. Aric has finally begun to mature and evolve from a primitive, war-mongering being.  This storyline exceeded my expectations as it continued to grow each issue from simply being a tale of vengeance.  There has been an emptiness in Aric throughout this series and there was this ongoing tragedy that made it difficult to be happy for him.  However, perhaps this is the start of him being able to finally move forward from that tragedy.  The themes concerning faith and decisions that stem from it were thought provoking.  There are no easy answers and not everything can be laid out on paper, but the ability to recognize this and continue to show resolve requires the combination of faith and determination.  Aric continued to show his ability to learn more about the armour’s capabilities and use them effectively.  He is beginning to show more dimensions to his character and I’m looking forward to seeing how he interacts with the people of Earth now.  The Vine also showed more growth in this issue and all in all, I was hit with a few surprises.  It was interesting in this issue how a few select individuals will act upon their own interests at the expense of the greater whole.  They did so while claiming it was for the good of all.  I am interested to see what the fall out will be in later issues.  Perhaps this issue will signify Aric finally coming to be at peace, which is something that I don’t think he was at even during his own time and with his people.  Nord’s work in this title continued to impress as there is such a strong combination of simplicity and complexity in his work.  He knows when some pages require more simple visuals and when others such as the battle scenes, need to be more detailed.  Baumann’s work continued to strongly complement Nord’s work and it suits this title very well.  I also love the 8-bit issue covers from Valiant this month…way too awesome.  Another strong issue in a series that I enjoy very much.

This isn’t really a complaint, but I was wondering if the plan with the Sky Array did come to fruition if it would’ve actually worked.  The armour can take a large amount of punishment and I had some doubts that Aric was actually in grave danger.

Buy It.  This comic is consistently good.  It isn’t affected by editorial mandates or corporate interference and the end result is a great story arc.  Overall it went in a different direction than I originally thought it would and thankfully it did.  The story took place on a different world, but it was still very relatable to the human experience.