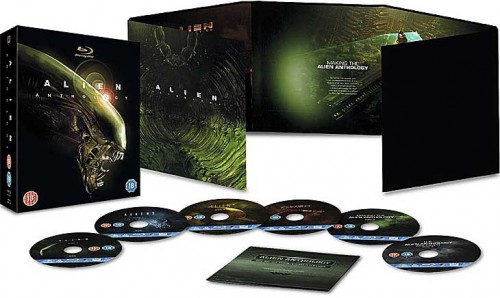 It’s been a while since we’ve posted a great Blu-ray or DVD deal, but when I saw this it was too good that I had to share.

The Alien Anthology Blu-ray set was regarded as one of the best Blu-ray releases when it came out in 2010. It still is.

The multi-disc collection contains Alien, Aliens, Alien 3, Alien: Resurrection and a smorgasbord of supplemental material that, if you were to try to watch it all, you would leave a very big indention in your favorite comfy chair or couch.

Even if you don’t particularly like the last two features in the anthology, $20 is money well spent for Ridley Scott’s Alien and James Cameron’s Aliens, a sequel that I feel has the best title of any sequel ever.

Amazon is offering this fabulous collection for $19.99, July 9th only. That’s 71% off the suggested list price, folks.

Click here to order your copy while it’s available for such a terrific price!