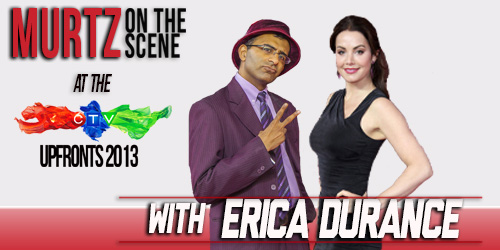 One of CTV’s biggest successes last season was its original series Saving Hope. The medical drama stars Erica Durance as Dr. Alex Reid, a doctor whose fiancé Dr. Charles Harris (Michael Shanks) is in a coma after a car accident. After a successful first season, the network renewed the series for a sophomore run.

On tonight’s episode, Alex becomes the unlikely advocate for a young prisoner brought into the hospital. Joel (Daniel Gillies) tries to convince Dr. Dana Kinney (Wendy Crewson) to come back to the hospital to operate on a disfigured refugee and a spirit shows up in the morgue just as Charlie is about to start a surgery.

I have had the pleasure of interviewing Erica Durance a few times, first at NBC’s Summer Press Day and at the MuchMusic Video Awards last year. I recently caught up with her again at CTV’s Upfront presentation. We discussed the second season of the show and what to expect [SEE VIDEO ABOVE]