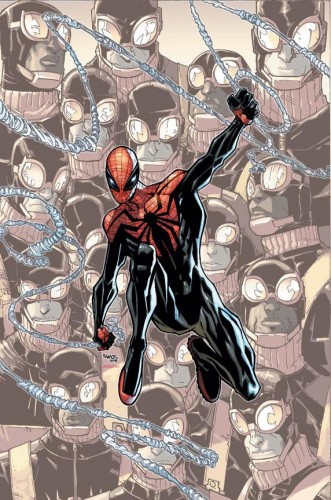 New York has had a problem that its residents have faced for the last [unknown length of time]. Shadowland, a giant Japanese castle in the middle of Hell’s Kitchen filled with ninjas, supervillains, and memories of terrible Daredevil stories involving plot devices akin to Parallax. That all changes tonight, however, as someone prepares to do something about it. Inside the castle Kingpin is busy planning his next move, preparing to take full advantage of Spider-Man’s recent crusade against organized crime to become the true Kingpin of Crime again. Unfortunately, that someone planning to do something about Shadowland is the Superior Spider-Man.

The Superior Spider-Man, an army of henchmen, and GIANT SPIDER ROBOTS! What follows is a mass slaughter of ninjas who turn to dust when you kill them and a beat down of the property itself as Spider-Patrol 7 keeps the civilians safe. The only people in any real danger are Kingpin and Hobgoblin, but JJJ still calls in to yell at Spider-Man. Jonah wants to know what the hell he thinks he’s doing, trying to blow up a building in the middle of New York. Spider-Man reminds him that there are plenty of on record statements pertaining to the true nature of Shadowland, and that as the Mayor of New York, Jonah has done absolutely nothing about it. He assures that no civilians will be harmed, that the ninjas aren’t really people, and that Fisk and Hobgoblin are his only targets.

This rightfully scares the crap out of the villains. Especially the maniacal laugh. Fisk opts to initiate his backup strategy and introduces Hobgoblin to Smedley Kornfeld, a bald fat man that looks oddly like Wilson Fisk that is holed up in a secret room of Shadowland watching TV and binging on junk food. Fisk breaks his neck and tells his associate that the man’s DNA was altered to mimic his, and once the building goes up in flames, everyone will presume him to be dead. This means Hobby has to find his own escape, and while he does he is immediately met by a Spider-Bot…that can’t see him.

But hey, this neighborhood is saved thanks to the Superior Spider-Man! It’s just too bad he’s been so short sighted that he hasn’t seen his own programing be rewritten, and a new gang rising up under his nose. One led by Spider-Man’s greatest enemy.

I loved the thought of Spider-Man themed henchmen the second I saw the word balloon in last issue, but the execution is better than I ever could have expected. Seriously, I was anticipating something a whole lot more….cliche than the paramilitary task force. I figured we’d have inept minions and not top of the line henchmen.

Have we had any hard confirmation that the Goblin King is Norman? I mean, it would seem ever so obvious that the one true Goblin would wage his war against his greatest nemesis, but I’d also expect that Norman would realize instantly that his foe would never behave like this. Same way Joker would be the first to know that Bruce isn’t wearing the Batman mask. Or maybe I’m just trying to look for stuff that isn’t there. Screw it, crazy ass guy in a Green Goblin outfit? If it’s not Norman then it better be Harry.

How does nobody question Spider-Man being himself when he changes his costume twice in a year and then builds giant robots and gets henchmen to go try and kill Kingpin? I mean, it’s awesome, but it’s decidedly not Spider-Man. This isn’t even something Civil War era Tony Stark would do, and he would actually round up a posse and go attack unregistered heroes.

The best thing this book ever did was get rid of Peter. His obnoxious ghost did nothing but hamper the development of Ock in his new role as Spider-Man. Now, without the handcuffs, we get to see how crazy things can get and it is awesome.

You would think someone with super powers in New York would have seen the Spider-Army traveling across the city towards Shadowland, figured it was bad guys, and tried to stop them solo. Right? Is that just me? Because you can’t shake a stick in Marvel’s New York without hitting a superhero.

Ock’s arrogance is starting to work against him, and it’s thrilling to watch. He’s so sure that his Spider’s across the city keep him in control of everything, but he has the giant blind spot to the Goblin’s. He’s so sure that he’s eliminating crime in the city, but really he’s just pushing control to someone that’s already several steps ahead of him. I can not wait for that endgame to unfold and to see just what it does to Ock’s incredible ego to find out that he’s been a fool from the start.

What if Norman Osborn winds up being the one to bring back Peter Parker?