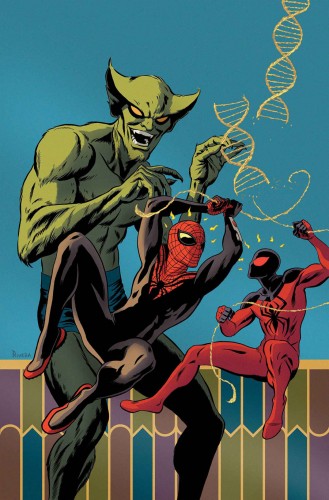 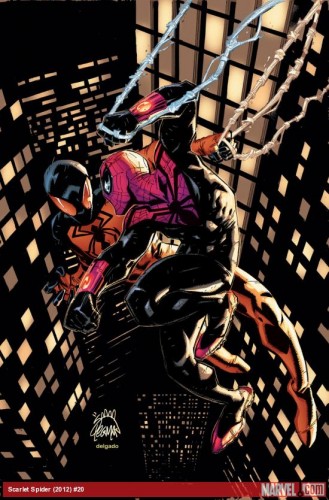 So once upon a time there was a crackpot named Miles Warren and he fell in love with a student of his named Gwen Stacy, and then, upon her death, cloned her. Not just her, however, he also cloned her boyfriend; Peter Parker. Thus begat the man called Kaine, and the late Ben Reilly. The two men to call themselves Scarlet Spider. Warren has died numerous times, but clones are clones are clones, and The Jackal is a villain that Peter Parker has never been able to truly sleep on.

The thing is, Otto isn’t Pete, and he wiped out most of those memories to get rid of Peter for good. It’s fine for him, though, he’s built a new life for Peter Parker that he finds befitting of himself, and everything is perfect. Well, up until he gets a surprise guest. One that doesn’t trigger a spider sense, and who wears red and black. The Scarlet Spider; the clone named Kaine. The man who killed Otto Octavius. Peter’s ‘brother’. Needless to say, what follows isn’t your standard ‘superheroes fight over a misunderstanding’, it’s just Ock trying to kill his incredibly confused murderer. He yells that Kaine will pay for what he did, and Kaine assumes it means that Peter has decided that he no longer forgives him for his past misdeeds. It doesn’t take long for the fight to become two-sided, but that’s when a six armed spider mutate cuts in. Well, several of them.

Ock and Kaine take them out, and Ock actually tries to kill Kaine in the process, but they are interrupted by the Jackal, Miles Warren, and Carrion. Kaine attacks in rage, almost dies, and Ock winds up saving him, but it really doesn’t matter. They’re overwhelmed, wounded, and there’s Gwen Stacy….

Kaine awakens from a dream of his cloning tube to the sight of Gwen Stacy. He and the Superior Spider-Man are tied up and prisoners of the Jackal, and he’s his usual witty crazy self while Spider-Ock is….well, talking to him like I imagine a Bond villain would if they were supposed to be the good guy. Jackal is taking DNA samples, well, has already taken them, because he wants to get ready for his next round of clones. Spider-Ock is furious at the idea, because his (Peter’s) DNA is his (Ock’s) and Jackal is not welcome to it (like that’s ever stopped him before). Really, Jackal isn’t a Bond villain at all, and to prove it, everything he’s talking about doing is long done.

Kaine breaks free and has an army of mutant spider clones to fight, and he manages to free Spider-Ock to help him. Kaine stops Carrion, and Ock goes to try and kill the Gwen clone, but Kaine stops him. Ock goes on about how all clones are abominations and mockeries of humanity. Ock goes ahead and starts blowing the place up, because Jackal can NOT have his DNA, and Kaine tries to save the Gwen clone from the flames, but she has none of it. Spider-Ock is proud of what he’s done, thinking all the loose ends wrapped up before Kaine manages to make his own escape. Kaine, rightfully, puts Ock on his ass before telling him to be a better hero.

So Kaine killed Ock, that still happened. Good. Now, can someone explain how the death is remembered and the resurrection isn’t? He was brought back good as new, but his severe brain damage status quo implied that it never happened. He also came back because Stunner sacrificed her life so the Hand could bring him back, but she’s showing up in November to fight Spider-Ock. It’s like that entire era is just casually remembered when it suits the story at hand.

Well, I guess I should go check out some of the later issues of Avenging Spider-Man if they go back and reference Gage’s X-Men/Spider-Man mini series. I absolutely LOVED that mini! Totally going to go get my trade out after I finish writing this….maybe go get the FF/Spidey mini that followed it up.

I had quit reading Scarlet Spider during the Minimum Carnage crossover, and it looks like that may be changing! I actually hadn’t realized that both parts of this crossover were out this week until late Wednesday night, and I picked up Scarlet Spider digitally because, well, I just couldn’t wait to read the rest. And with the cliffhanger? Yeah, I kinda sorta really want to know what happens next.

So I researched the artists, having gotten to the end of this review, just to see if I could place their work and jog my memory on who they are. I definitely knew Marco’s work, as I read about half of Rucka’s Punisher before it got buried in my ‘to read at some point’ stack. So now I’m just going to go ahead and log him into my memory as ‘dude to pay closer attention to’. In-Hyuk, on the other hand, I only know from Age of Ultron variant covers that I only saw online in articles about how many variant covers Marvel wanted to put out.

There was some delicious irony in Spider-Ock saying that Kaine is trying to pretend to be a hero after what he did. Actually, I might be able to make a case for the fact that Otto doesn’t know the meaning of the word.

I really don’t get how nobody questions the really out of character comments. I mean, I’ve suspended disbelief for the actions, but Peter and Kaine made their peace, and Peter randomly starts attacking him and talking about ‘what he did’. The two always had problems, but when Pete went to go beat him down he tended to find reasons he hadn’t already given Kaine a pass for. 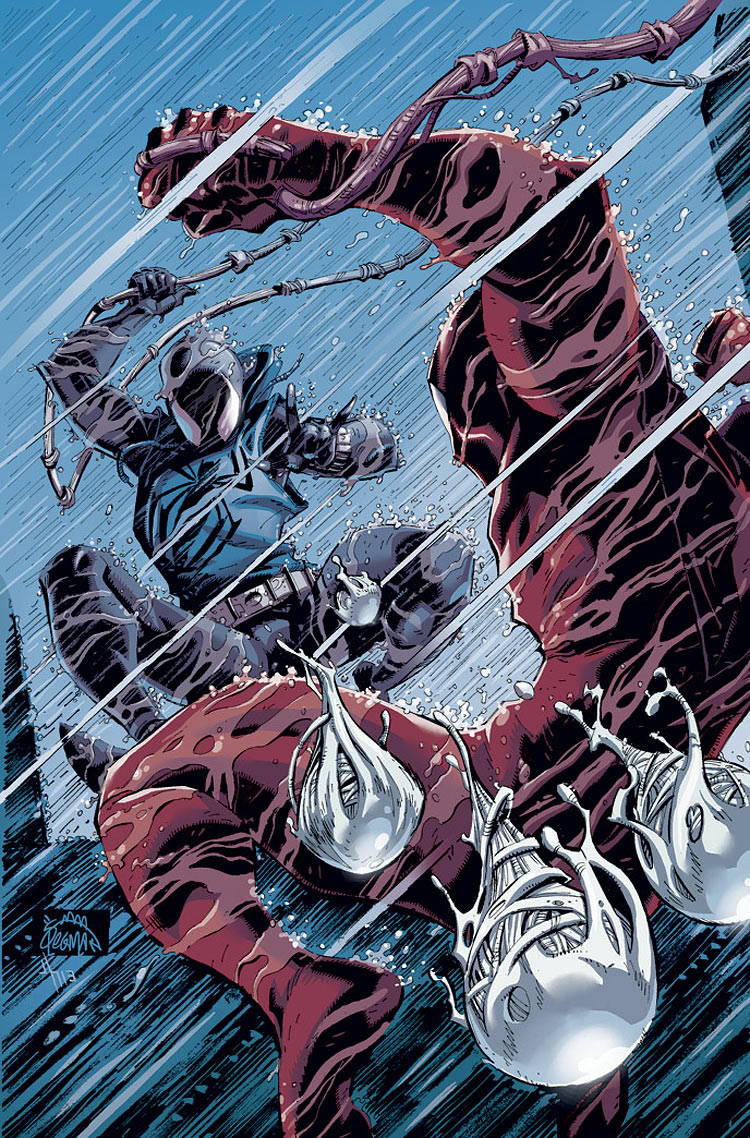 Wait, what the hell is this cover for next issue of Scarlet Spider? Scarlet Ben? And the solicit says that….wait, Ben is back next issue?! SOLD!

I miss Spider-Girl! Bring her back! I want my May!

Damnit, there’s no next month cover that promises me her return!

So, serious final thought, but the Spider-Man franchise is the strongest it’s been since….I’m going to say the late nineties, before the Byrne/Mackie reboot. Not to knock on the time between then and now too heavily, but for the most part the past decade was spent with one book that mattered (some of the time) and a bunch of trash titles…or just a few. Right now we’ve got Superior, Superior Team Up, Superior Foes, and Scarlet Spider. Scarlet Spider is going back on my pull list, and the others are all locked in. Hell, I might even buy Ultimate Spider-Man if they keep that name when Miles makes his jump to the mainstream universe.