Box Office: Gravity Dominates Weekend As It Generates Buzz With Audiences And Critics 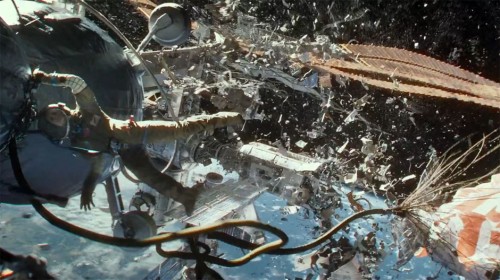 And you thought your day was bad.

While it can be assumed that director Alfonso Cuarón had been experiencing seven years of bad luck since his last film, Children of Men, opened seven years ago, I’d like to think that Cuarón was abiding by the notion that good things come to those who wait. His film Gravity opened to an impressive $55.55 million (with a per theater average at just above $15.5k). The opening total was enough to make it the largest October opening of all time (beating out Paranormal Activity 3 – thank god – and its $52.6 million).

Having already garnered acclaim playing the hat trick of film festivals (Venice, Telluride and Toronto), the space-set film starring Sandra Bullock and George Clooney has almost universal acclaim with a certified fresh rating of 98% on Rotten Tomatoes (210 positive reviews to only 5 negative) as well as a score of 96 at Metacritic, making it the best-performing mainstream release of 2013 in terms of critical acclaim. Add the buzz it’s gotten from those who have already seen it and you have your one-two punch of commercial and critical success. It had already been getting some Oscar talk for its impressive special effects, but don’t be surprised to see this one end up in the Best Actress and Best Picture races.

The first weekend of October has been a very good release window for Warner Bros. Pictures. Both The Departed and Argo opened the same weekend, going on to win Best Film. If Gravity does indeed get nominated, it will be producer David Heyman’s first trip to Oscars with a nomination. Previously, he produced the eight Harry Potter films for Warner Bros., including The Prisoner of Azkaban which was directed by Cuarón. In terms of opening weekend, it marked Sandra Bullock’s highest grossing opening beating out the $39.1 million The Heat made this summer. As far as what was the preferred method of viewing Gravity, nearly 80% of its gross came from 3D screens in the U.S. In addition to the $55.55 million it made domestically, the film also collected another $28 million internationally to give it a $83 million worldwide total. Not bad for a director whose last film only made $35.5M in the U.S.

Brad Furman, who was part of what can only be described as the “McConauissance” when he directed Matthew McConaughey in the legal thriller The Lincoln Lawyer, which helped push the actor away from stupid romantic comedies, didn’t fare to well with the weekend release of Runner Runner starring Justin Timberlake and Ben Affleck. Fox was aiming for a double digit figure in the ballpark of $10-$12 million. Instead, the crime thriller couldn’t get out of the starting block and finished with $7.6 million. Plus, I don’t think there’s a big market for online poker.

Warner Bros. other big release that’s getting a little Oscar buzz is Prisoners. Still in the top five after three weeks, it added another $5.7 million to bring its total to $47.9 million. A notch below it is the Ron Howard period racing drama Rush. Suffering a major drop in viewing percentage, losing 56% of its first-week audience, it could only muster $4.4 million. That’s only $200k above Joseph Gordon-Levitt’s directorial debut, Don Juan. After two weeks the sex comedy has made $16 million (it only cost $6 million to produce). Baggage Claim is in seventh and doing about as best as a romantic comedy starring an all black cast can do. Mrs. Robin Thicke, Paula Patton, is a delight, and it’s always good to see Derek Luke in movies, but the rom-com is about as predictable as you can get.

With it being the start of October, there’s only one major horror film in release and that’s the early September holdover, Insidious: Chapter 2. Making $3.87 million, James Wan’s swansong to horror has stayed in the top 10 much longer than I had estimated. I previously wrote that after its $41 million opening it would be top 10 prevalent for maybe two more weeks. Looks like I was a week off.

In ninth, Pedro Pablo Ibarra’s Pulling the Strings opened with $2.5 million. This Pantelion/Lionsgate release follows the success of its Instructions Not Included, which became the highest grossing Spanish language film ever to be released in the U.S.