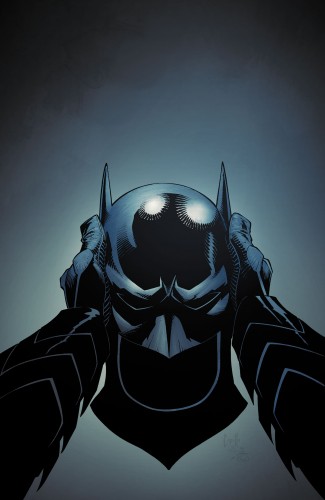 Bruce cleans up after his non-death, in his cave to be. Meanwhile, across Gotham, the Red Hood Gang is ripping off chemical canisters and not realizing that their members are vanishing one at a time until the final man sees them strung up to a billboard. The Bat swings in, his debut outing, and uses that final Hood to complete the Bat he left as a calling card. Red Hood One is not pleased with this annoyance bothering his plans, though he does kill several of his men with the special concrete meant for the new Seaport. Batman and Alfred have set up a map of Gotham with all of the Gang’s crimes, and Bats is able to see through the randomness to pick out their bigger picture, but he can’t do it alone. He goes to his uncle for more information, but instead finds out that his uncle has been branded by the gang for his attempts at stopping them.

Deep in the cave Bruce and Alfred keep working out the plans of the RHG, pulling in the Wayne links and realizing that one Wayne owned site hasn’t been touched at all, but fits their M.O., and Bruce realizes not only what they are doing, but what he has to do. He calls a press conference, letting the world know that he is not dead, and he gives a moving speech about Gotham City, what it means, why they’re there, and what it should be. He outs the plans of the Red Hood Gang, says exactly what they have been doing and what they will be doing while standing outside of their hideout at A.C.E. Chemical and putting them on notice. They launch rockets at him, scattering the news crews as Bruce sneaks in to fight the gang. He’s quickly taken hostage, and Red Hood One monologues his evil plans before Bruce can talk about how the guy is a nut job. The power goes out in Gotham, in the shape of a bat, and the Bat makes the Gang into his bitch. Very Batman like as he takes them down one or more at a time before one member of the gang sacrifices themselves to save Batman, but that just leads to fire in a chemical plant.

The cops arrive, Red Hood One tries to escape, and Batman has to stop him. They fall into the deathtrap of the chemical factory and neither really gets the upper hand until a vat of chemicals explodes and splits them apart. See where this is going? History repeats itself and the Red Hood falls into the chemicals, his body isn’t found. Because he’s The Joker now, well, he will be, everyone remembers The Killing Joke.

In the aftermath we find out how the Bats first true public outing keeps Bruce safe from being connected to him, the true identity of Red Hood One…and how he’s been dead for quite a while, reopening the question of ‘who is Red Hood One’. Gotham is ready to accept their protector, and Batman is ready to stand in their defense. And it’s just in time, too, because Edward Nygma has a riddle, and the fate of Gotham depends on finding the answer.

On principle I hate books that are expensive for the sake of being expensive, but this issue was freaking MASSIVE and made the extra dollars (several) in price feel worth it. Seriously, books are twenty pages, this was sixty four. There were SEVEN pages of ads in the book, not counting the interior covers, so this book was pure content. Was it expensive as hell at seven bucks? It REALLY was, but Snyder gave us an epic blowout conclusion to one arc while immediately starting off on the next.

Riddler debuts announcing himself to the public as Edward Nygma, so why is he wearing a mask?

I love how there’s no rest for the weary hero, and no sooner than the Red Hood Gang goes down than Batman has another city destroying threat to bring a stop to. Even as a rookie Batman has no time to rest, and it’s just better that way. It’s more of a trial by fire.

Zero Year has been a pretty big hit for me, despite my initial wariness on going back to the origin well with a character like Batman where I can’t imagine that much had changed. While yes, that is somewhat true, and most events seem to have still happened, the additions are what makes it. The Red Hood Gang made for an entertaining arc with them as the lead villains, and Red Hood One being positively evil and throwing himself to his fate as the Joker? So much better than him being a guy who just had a really bad day, took a bad score, and turned into a homicidal mad man.

There’s this moment where RH1 slips behind a column to hide, removes his hood, and looks at Batman with his own eyes, and you can just see the obsession bloom. In one page the entire dynamic between Batman and the Joker begins with Red Hood One looking on as Batman rips through his men like they were nothing. Fantastic.

Last week on my Facebook page I listed off my three favorite DC books and a friend of mine criticized me for listing Batman and Robin before Batman. Well, I won’t make that mistake again, Batman and Robin is a favorite of mine, but holy crap, this is one of the best single issues of Batman I’ve read in years. Snyder has a knack for that, he just really gets Batman and Gotham and all the intricate pieces that make up the Dark Knight. This book is a must read for a Bat fan, and really, Zero Year as a whole is shaping up to be something truly special.

If Year One was the grim and gritty origins of the eighties Dark Knight, then I am VERY glad that Zero Year is the summer blockbuster epic origin of today.

So how long until Bruce meets Dick Grayson?