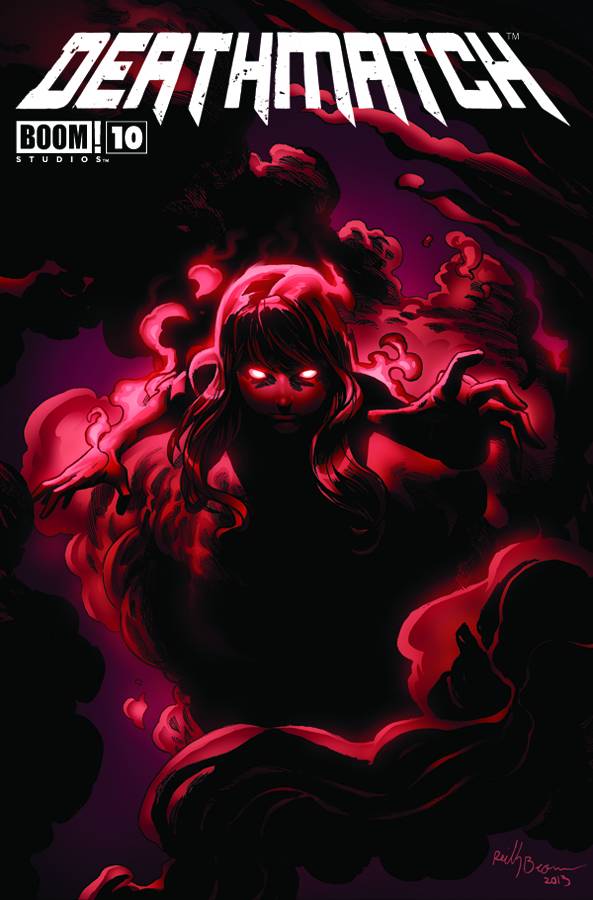 Sable tries to make her way over to Benny Boatright aka Dragonfly to tell him of her discovery, but is intercepted by the Light Guards.  She is able to speak to him briefly, but is called in to battle Manchurian.  Prior to their battle, Sable makes some discoveries about Manchurian.  Their battle is fast paced and fierce with Sable having trouble with his vast resources as they go all Tron on one another.  Then there is a flashback to when all the heroes and villains agree to the plan prior to entering the arena, which is lead by Meridian and Manchurian.  Their plan involves the Anti-Meridian and Manchurian reveals that all may not be as it seems.  Meanwhile Benny is forced out of recovery and is forced to prepare to fight the Anti-Meridian.  At the same time, Sable is attempting to use her superior deductive skills to defeat him.  She finds a weakness and afterwards Manchurian makes yet another revelation.  Meanwhile Benny/Dragonfly is preparing to fight Anti-Meridian, the being who completely manhandled Meridian in the previous round.

I usually don’t swear in my reviews, but Holy Shit this was an intense issue.  It makes the entire read so much more enjoyable when the payoff for some of the answers to the major questions are so damn complex and worthwhile.  Jenkins has done an incredible job thus far of creating such an intense and compelling mystery.  Every issue I think or say “Dammit” because I have to wait a month to find out more answers.  There is such a feeling of hopelessness in this book sometimes because the odds are so great for both the heroes and villains.  I cannot wait to reread this series from the beginning.  The entire play made by Manchurian was brilliant and made for such a damn good read.  It was so well-written and the explanation, as complicated as it was in some spots, was very easy to follow.  Just when I thought I had things all figured out, the story continues to go deeper.  I’ve really enjoyed Sable’s role throughout this series and it’s going to be increasing next issue.  Grey…oops I mean Mr. Scherl, had a question regarding her and it has been bugging me as well.  What is underneath the mask? It seemed early on that Benny would be the major player, but Sable has been really coming along.  Speaking of Benny, I really enjoy seeing him in action and I cannot wait for his fight with Anti-Meridian.  Each issue I’ve been looking forward to various matchups and this can be attributed to the writing.  He has done such a great job of providing good characterizations for such a vast cast.  Magno’s art is strong yet again and some of his panels with the aged Manchurian are really haunting.  He’s a very good storyteller and it shows during the battle scenes.  Garland’s work in this issue was very vibrant during some scenes and dark in others.  I enjoyed how his work helps to set the mood for different parts of the story.  Fan-frickin-tastic read this month and yet another hell of a cliffhanger.

I’ve been looking at this issue and can’t really say I have any complaints.

BUY IT! You will not regret it.  If you haven’t picked up this book yet then track down the back issues.  This series is so damn good.  Between Boom! Studios and Valiant I’ve been reading some exceptionally great books this year.  Paul Jenkins and company should be extremely proud of the work that they’ve done in Deathmatch.  Without a doubt, this has been one of the strongest of most consistent titles available this year.  I just can’t recommend this book enough.  I haven’t read anything else yet this week, but I already know that this is my book of the week.