Battle of the Atom Review: Uncanny X-Men #13 by Brian Bendis and Chris Bachalo 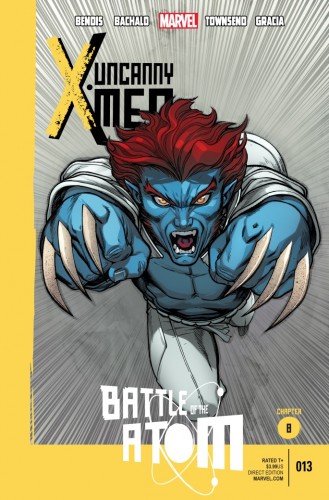 The Uncanny X-Men and the Real Future X-Men stare down the Jean Grey School, recently overtaken by the Fake Future X-Men, and Future Jubilee wants to go shove her Wolverine claws down someones throat, but Scott wants to come up with a plan first. They try to explain why he needs to listen, but it doesn’t matter, Psylocke wasn’t Psylocke, Young Bobby and Hank are gone, and they are under attack. They can handle this though, they’re the X-Men! Magik and Mustache Colossus take their giant Soul Swords and head in for a fight, being met by Deadpool and Molly who provide a challenge for all of…two pages? Yana does what Yana has to do. Meanwhile, Future Xavier’s Grandson attacks the others with Krakoa, because why not have a giant monster for a campus if not for it to try and eat people?

Inside Hank and Xean are trying to dump the originals back in time, with Raze (the Wolverine/Mystique offspring) bringing the stragglers. Future Hank wants to get it over with, Xean wonders if they ever had a chance, and Yana tries to stop them. Jean Grey, though, so yeah, she doesn’t. Mind control and telekinesis? She tries to make Yana kill herself, apparently what happens eventually anyway, but the others are freed from Krakoa when Future Colossus does what must be done to free them and the innocent monster. Inside the Time Cube isn’t working, as the Young X-Men aren’t going anywhere, so they test it out on Raze instead…yeah, he travels no problem. Unfortunately, that means there is a huge problem, but before the Fake Future X-Men can deal with it….well, hello there pissed off Uncanny Cyclops!

So that’s who the Sorcerer Supreme is! Wiccan! Now I feel like a schmuck for not coming up with that on my own!

What I first thought to be Betsy’s Crimson Dawn tattoo has become a very clear scar on Jubilee’s face that has left her without her left eye. It takes a Chris Bachalo to give us that very clear detail. Isn’t Chris awesome? Hell, isn’t one eyed, pale skinned, energy clawed Jubilee awesome?

How the hell does Jubilee get energy claws?

Is Xavier’s grandson Legion’s kid? I pity the poor woman who got pulled into that hell.

IceHulk just pulls himself back together, good to know. Still confused about the whole ‘two Bobby’s’ thing, but hey, maybe IceHulk is Modern Iceman turned bad.

So, if the X-Men have broken time AGAIN, and now the original five are stuck in the present because of paradoxes, and that one time when Legion killed Xavier time ripples gave us the Age of Apocalypse, where the hell is our alternate reality to compensate for the fact that the original five X-Men never did anything in their history? How about Xavier’s compensating with new recruits? This is literally the way you start any alternate timeline story ever, so go ahead and give it to us. I mean, for the love of crap, if Jean never goes back to the past, then she’s never replaced by Phoenix, who never kills that solar system, which means that the upcoming Guardians crossover is them punishing her for events that literally can never happen now.

Damnit, Marvel, now I need to chase this great read with some advil.