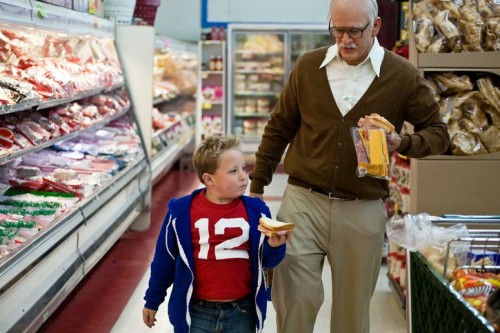 Much like the Jane’s Addiction, soon Irving Zisman will be caught stealing.

Should we be concerned that it took what can best be described as a Jackass spin-off rather than a true sequel to dethrone the box office juggernaut Gravity? Not at all. We can still have nice things.

Jackass is an MTV television property that existed back when it was in my college days (as comparison: The Simpsons debuted when I was in fifth grade, Beavis & Butthead when I was in middle school, and South Park in my high school years). It had the greatest title imaginable, because when you saw a bunch of guys performing outrageous stunts and failing miserably some of the time, the first thought to pop into your head was, “What a jackass.”

There have been four Jackass movies and each one has been an outright success. The latest, Jackass Presents: Bad Grandpa arrives three years after the most successful in the franchise, Jackass 3-D. As a change of pace a 90-minute montage of stunts and gags is replaced with a fictional road trip involving Johnny Knoxville reprising one of his characters, 80-year-old Irving Zisman, along with Jackson Nicoll (previously seen in the Nickelodeon Films’ release Fun Size). Getting the band back together with Knoxville starring and co-writing, Jeff Tremaine directing and co-writing, and Spike Joze co-writing, this fourth Jackass feature actually had the second best opening of the four releases with $32 million. Jackass scored $22.8 million in 2002, Jackass: Number Two bettered it by six million ($29 million), but the biggest opening occurred when the franchise went with 3-D with its third release ($50.4 million).

The success of Bad Grandpa meant Gravity fell to second in its fourth weekend with $20.3 million. That brings its domestic total to $199.8 million. For those that claim to know everything George Clooney, that figure makes it the highest-grossing film of Clooney’s career. And with the second lowest drop in attendance of a top 10 release (with -28%) Captain Phillips slipped to third but added $11.8 million to bring its three week total above $70 million.

In what can only be considered a disappointment, Ridley Scott’s The Counselor opened in fourth place with $8 million. With a reported $25 million budget, 20th Century Fox better hope that the star presence of Brad Pitt and Cameron Diaz will make it a success overseas. The drug-trafficking thriller was marketed with emphasis placed on it being written by Cormac McCarthy. It was his first screenplay for a feature film so fans of McCarthy’s novels may have their interest piqued, but it wasn’t enough as it only netted a per theater average of $2,628. #1 Bad Grandpa averaged a little more than $9,500 per theater.

Cloudy with a Chance of Meatballs 2 made it past the $100 million mark. It is the 25 film this year to meet or exceed that total. Sixth place finisher Carrie keeps dipping as the day near Halloween. With a $5.9 million it was able to cross $25 million in two weeks. Arnold Schwarzenegger and Sylvester Stallone continue to fall into the land of law of diminishing returns with Escape Plan. Only a $4.3 million weekend. Had this been a late ’80s/early ’90s release the film would have been an automatic hit. Now it’s just embarrassing.

One of the few bright spots in the top 10 leader board is the addition of 12 Years a Slave. Placing eighth overall as Fox Searchlight extended its theater count from 19 to 123 theaters, the awards buzz release would garner an impressive PTA of $17,480 (making it the second best PTA of the weekend after Blue is the Warmest Color). Ninth place finisher was another Fox Searchlight release – Enough Said with $1.6 million. Rounding out the list was Prisoners with $1.1 million.

Upcoming this weekend it will be Ender’s Game vs. Free Birds vs. Last Vegas in an attempt to knock Bad Grandpa from its #1 seeding. So films for teens/young adults and fans of science fiction vs. families and animation vs. an older crowd. Something for everyone it seems, but in the end I think Ender’s Game, even with the negative press due to the comments of author Orson Scott Card, will when out over Woody Harrelson and Owen Wilson as a pair of animated talking turkeys that want to change the course of history by replacing the Thanksgiving turkey with something else.