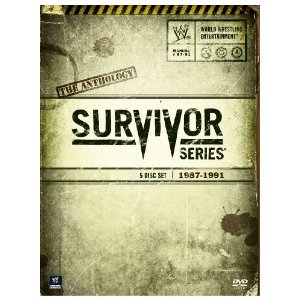 Gorilla Monsoon and Roddy Piper are calling the action. This year will feature the first-ever Survivors Final Match, as well as the hatching of a giant egg. No, really.

Demolition is accompanied by Mr. Fuji, while Perfect has Bobby Heenan accompanying him. Warrior is the current WWF Champion, and Texas Tornado is the Intercontinental Champion. Animal and Smash start the match with some intense brawling. The Warriors quickly dominate and go to work on Smash. Tornado locks Ax in the claw and then tags the captain. Warrior hits a shoulder block, a flying tackle and a big splash for the first elimination at 3:23. The remaining members of Demolition respond by beating the WWF Champion down. Hawk gets tagged in and the Perfect Team cuts the ring in half on him too. When Hawk makes the comeback and lands a clothesline from the top rope on Smash, Crush comes in to break up the cover. All four men brawl and both Smash and Hawk take a shot at the referee and all four men are disqualified at 7:36. That leaves Perfect at a distinct disadvantage against the Texas Tornado and the Ultimate Warrior. Both Perfect and Heenan are abused by Warrior and Tornado, until the Intercontinental Champion misses a charge in the corner and cracks his shoulder on the post. Moments later Perfect hits the Perfect-Plex to eliminate Tornado at 11:02. Perfect tries an immediate Perfect-Plex on Warrior but it only gets two. He works Warrior over until the inevitable comeback. Warrior hits a flying tackle and a big splash to get the pin and become sole survivor at 14:20. That was an adequate opener because the crowd got fired up, but the action was just okay.
Rating: **¼

Bret Hart and Jim Neidhart are the current World Tag Team Champions. Sadly, Bret’s brother Dean passed away just the day before this event due to kidney disease; Piper mentions that Bret is dedicating this match to him. This is a famous match because it’s the debut of the Undertaker, and he’s accompanied by Brother Love. Undertaker starts with Bret, but neither the Hitman nor the Anvil can phase the big man. Koko tags in and immediately gets hit with a Tombstone Piledriver for the first elimination at 1:43. Now Rhythm & Blues and the Hart Foundation work a mini tag team match. Bret wisely makes a blind tag to the Anvil, who hits Honky with a powerslam to even the odds at 4:23. The Dream Team is clicking now, working over DiBiase like a well-oiled machine. Virgil intervenes, tripping Neidhart from ringside and DiBiase levels him with a clothesline to get the pin at 5:56. Undertaker gets back into the fray and just dominates. He goes up top and hits a double axe handle on Rhodes to eliminate the team captain at 8:31. Brother Love takes a few cheap shots and Rhodes goes after him, so Undertaker comes to the rescue of his manager and gets counted out at 9:23. Monsoon tries to sell the idea that Undertaker was the legal man in the ring but since Valentine and Bret were wrestling the whole time this was going on, that’s just erroneous. Speaking of, Valentine goes for the Figure-Four but Bret gets an inside cradle to even up the odds at 10:01. Bret tears into DiBiase, atomic dropping him to the floor and following him out with a dive. The Hitman is absolutely on fire here, having a great showing in the Survivor Series for the second year in a row. He almost pins DiBiase with an O’Connor Roll after feigning a knee injury, and again with a schoolboy rollup after Virgil’s interference backfires. A resilient DiBiase is able to absorb a cross body block and roll through it to get the quick pin at 13:59. There was a lot to like about that match, with the debut of one of the biggest superstars of all-time, as well as a one of the hottest closing sequences to any Survivor Series match to date.
Rating: ***

The Visionaries have the “Doctor of Style” Slick in their corner. Warlord and Jannetty start it off. That goes the obvious route ads Jannetty tries to use his speed and Warlord counters with his power. Michaels and Martel go next and as soon as Roberts tags in, Martel bails. Roma, Snuka, and Hercules all get tagged in as well as both teams look to establish momentum for their side. Warlord strikes first, nailing Jannetty with a powerslam for the first elimination at 5:18. Michaels is the next target and the Visionaries keep him in their half of the ring. Snuka gets a hot tag and takes it to the Model. He goes for a cross body block off the second rope but Martel rolls through and grabs a handful of trunks to get the pin at 9:43. Roberts survives long enough to make a hot tag to Michaels as the Vipers really need to eliminate someone. Unfortunately it doesn’t happen, as Power & Glory hit Michaels with the Power-Plex to eliminate him at 15:19 and give Roberts insurmountable odds. Amazingly he’s able to drill Warlord with the DDT, but the referee gets distracted and Martel tries to spray Arrogance in Roberts’s eyes. Roberts grabs Damien and chases Martel to the back and gets counted out at 18:05. That’s the first time in Survivor Series history that a whole team has survived. The match was perfectly acceptable and it was around this time that Shawn Michaels really started to stand out, so that’s fun.
Rating: **½

Duggan and Haku start it off. This one will probably feature a lot of brawling, if I had to guess. They go back and forth and then Boss Man tags in and gets drilled with a dropkick. Boss Man then reverses a whip and hits the Boss Man Slam to eliminate Haku at 3:15. Duggan gets triple-teamed, and then Hart pulls the ropes down, causing him to tumble to the floor. That’s all Duggan can stand, so he brings his 2×4 into the ring and cleans house with it, and gets rightfully disqualified at 6:11. Hogan comes in fired up on Earthquake, but soon gets slammed down to the mat. Bravo tags in and continues the punishment until Hogan catches a quick inside cradle for a three-count at 7:59. Boss Man tags in and takes it to Earthquake. It doesn’t last long though, as Earthquake comes back and squashes Boss Man with an elbow drop at 9:08. Hogan comes back in and Earthquake beats him down but misses a splash and Tugboat gets the hot tag. They take the battle to the floor and Earthquake and Tugboat brawl until they are both counted out at 11:31. That just leaves Hogan versus the Barbarian. Gee I wonder who’s going to win. Even as a kid I thought a matchup like this was predictable. Barbarian dominates for a bit and hits the Top-Rope Clothesline, but Hogan Hulks Up. Hogan hits the Big Boot and the Legdrop to get the win and be sole survivor at 14:49. That was the usual Hogan formula stuff.
Rating: **

The Bushwhackers hit Zhukov with a double clothesline. Santana also strikes quickly, eliminating Zhukov with the flying forearm at 0:49. Tanaka accidentally kicks Sato when Santana moves out of the way, and Butch goes to work. The Bushwhackers hit Sato with the Battering Ram to eliminate him at 1:48. Tanaka is next to go, when Santana hits him with the Flying Forearm for the pin at 2:12. Slaughter is now facing four-on-one odds. He weathers Volkoff’s offensive storm and hits him with an insanely weak looking elbow drop for his first elimination at 5:25. Luke comes in and goes up top for a splash and misses. Slaughter follows up with a gutbuster for his second elimination at 6:32. Moments later Slaughter makes it an even matchup after pinning Butch with a clothesline at 6:55. Santana brings the fight to Slaughter right away. The referee takes a bump and General Adnan sneaks in the ring to hit Santana with his flag pole, but the referee was pretty much looking right at him. Slaughter locks on the Camel Clutch but the referee calls for the DQ around 10:31 (no closing bell, argh). That was rather brief and not all that interesting.
Rating: *¾

Before the match, Warrior cuts one of his classic promos, standing right in front of Santana, and then referring to the power of “Arribaderci.” (3:52)Even with Warrior’s complete lack of regard for him, Santana is able to hit Warlord with an immediate Flying Forearm to eliminate the massive man at 0:30! That’s a big pin for the babyface team. DiBiase comes in and avoids the Flying Forearm, and then catches Santana with a Stun Gun for the pin at 1:53. The heels turn the attention to Hogan and work over his back. Power & Glory hits the Power-Plex, but Hogan no-sells it and eliminates Roma with a clothesline at 5:38. Martel comes in and Hogan finally makes the tag to the WWF Champion. Warrior is on fire and tags back out to Hogan, who clotheslines Martel to the floor and Martel takes the countout at 7:16. DiBiase is next to go, as Hogan hits the Big Boot and the Legdrop to pin him at 8:38. Warrior tags in and hits Hercules with a shoulderblock and a big splash to win the match at 9:09. The crowd was hot but the action was just completely meaningless.
Rating: *½