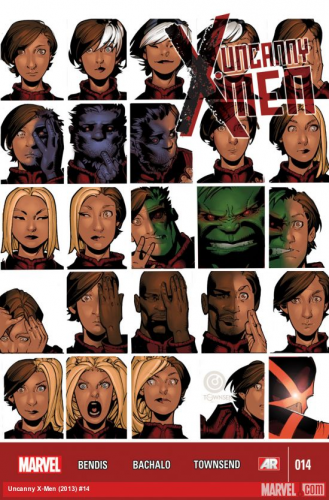 With the rain coming down, and the dirt hill turned to mud, the students of the New Xavier Institute have to climb to the top without their powers as the teachers stand and watch. The students complain as they tackle the obstacle course, some (like Angel) question how the original X-Men will be treated when they show up, and Ben winds up being the last one up. He doesn’t get why they can’t use their powers, and Scott points out that his powers wouldn’t help him at all there. Scott hits him, dares him to hit him back…Ben does a piss poor job of it and winds up back on his ass. Later, after a shower, Christopher tries to tell him he was awesome, but Ben is just a downer. And Emma…she’s waiting for him in a Punisher top.

Emma wants to teach him how to use his powers, because it’s relatively obvious that Scott isn’t going to be aces at it. She pushes him, talks to him, and breaks down what she believes it is that he does before taking him off for a field trip. To a bar in Atlantic City, to pick up a lonely blonde, and to fail miserably at it as he doesn’t try his powers at all. Security gives chase as his teachers watch on, but he slips into a table and strikes up a conversation with a girl as he takes on aspects of her appearance, and free he goes. Emma keeps it up and the montage shows Ben adapting to so many different people and fitting in perfectly, despite being a stranger to the people.

For a final test, Emma sends him to deliver a letter to a Timothy Duggan in the financial district, but tells him nothing he’d need to know to get there. He makes his way through, charming his way up to the top floor and directly into the man’s office, hand delivering the letter from Emma to the man who…well, it’s Dum Dum Duggan. This is a SHIELD facility, and that letter pretty much says “You’re making Sentinels. Stop. Or else. Love Cyclops”. So guns are drawn, and Yana bails him out, and we finally see just how awesome Benjamin Deeds can be!

I had written Ben off as the most forgettable of the new mutants created in the last few years, ranking him as even less memorable than the cast members of Generation Hope (remember them?). This is what happens when Bendis plays to his strength, though, we wind up with a character driven piece that turns the random guy in the background of the cast into one of the most prominent members.

I feel like we’re missing an issue somewhere. Battle of the Atom ended with Kitty and the X-Kids quitting and getting picked up by Yana and Scott, All-New opened with them walking up to Scott’s base, and this issue began with the Uncanny X-Kids training while they were waiting for them. Scott went to pick them up. Why are they waiting for them?

I would not complain if more issues opened up with Eva and GOLDBALLS front and center. I have my favorites and I will stand by them being prominent in all of the preview art and, thus, in the faces of potential readers. They are awesome and need to be shown off.

The comedy that Bendis tries for in the X-Men books is really not that different from what he tried for in Avengers. The difference being that, while it always felt awkward and forced with the Avengers, it’s worked perfectly with the teenage casts in his X-books. Hell, it works well with the adults too. It really helps that Wolverine and Kid Scott ar the only characters he writes with sticks up their asses. His Cyclops is a revelation.

I spent several minutes looking over Ben’s transition into Emma, and the bit of him looking down the towel, and wondering…does he genderswap? He doesn’t at any other point in the issue, but did he need to? Is he capable of it? His usefulness is now clear as day, but I still have so many questions!

I still can’t get over how quickly Bendis transitioned from a writer I went out of my way to avoid into someone putting out books that I love on a regular basis. I almost feel like I should give his Ultimate Spider-Man another shot because his X-Men is just that good. And I mean, it’s not even that his strength lies in the one off character driven stories, which it REALLY does (and which is pretty much entirely the reason for the score), but everything he’s been doing has been absolute gold.

I never really stopped loving the X-Men, but he made me remember exactly how much. Thanks Brian, this is the X-Men I’ve been wanting for.