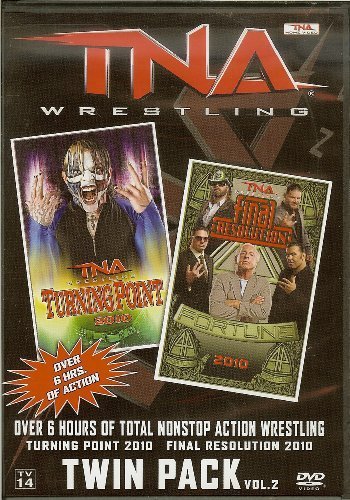 The opening video package is about nothing but TNA World Champion Jeff Hardy, who will defend the title against Matt Morgan tonight with Mr. Anderson as the special guest referee. Mike Tenay and Taz are on commentary.

James Storm and Jesse Neal start the match. They slug at each other and Neal unleashes some generic babyface offense. Shannon Moore tags in and he keeps his team in control. Storm and Robert Roode use some general heel tactics to gain control and go to work on Neal. Eventually Moore gets the hot tag and he’s on fire. There’s an odd cut so Moore and Roode must have blown something. They spill to the floor and Ink Inc. hits dives to wipe out their opponents. Back in the ring Moore hits a neckbreaker for two. Neal lines up for a Spear but he runs right into a Last Call instead. Beer Money follows up with the DWI to get the win and earn a title shot at 10:26. Strictly formula stuff here, but that’s what made it a good choice for an opener.
Rating: **½

They start the brawl on the floor. James dominates, and back in the ring hits a missile dropkick for a two-count. Tara comes back and knocks James to the floor, so James goes under the ring and comes out the other side to dropkick Tara to the floor. They fight into the crowd and go all the way backstage. The brawling continues as Tenay and Taz make jokes. I know I take a hate-filled brawl more seriously when the commentators crack jokes. I seriously hate these guys. Anyway, the women fight into the men’s bathroom, drawing a big pop from the crowd. From out of nowhere Madison Rayne sprays James with a fire extinguisher ad Tara covers for the win at 10:26. I guess it was sort of interesting when Ivory and Luna had these kinds of matches over ten years ago, but I don’t really care anymore.
Rating: *

E has been the champion since 11.7.10, and this is his first defense. Cookie won’t go into the cage and instead starts walking to the back. Then for some reason Shark Boy comes from out of nowhere to force her into the cage. Finally the match can start for real and Lethal goes on the attack. The champ tries fighting back but Lethal has an answer for everything. Lethal is from New Jersey too, I’m told. E finally turns the match in his favor and the crowd dies. However they do come back alive in support of the challenger, who has long been a favorite in the Impact Zone. So that means they should probably let him go back to Ring of Honor and keep (and push) Robbie E. Lethal fires back with a flurry of offense, including the Lethal Combination but it only gets a two-count. The referee gets distracted by something shiny (presumably) and Cookie throws hairspray down from the cage. Lethal gets a hold of the spray and uses it right in front of the referee, and then hits the Lethal Injection. Bummer for Lethal though, as Hebner rightfully disqualifies him at 8:09. Robbie E is boring and a terrible X Division Champion.
Rating: *¾

Cookie celebrates with the belt, and Shark Boy makes his way back out. Boy hits a woman with the Stunner and celebrates. This didn’t lead to a return or anything, so it was really quite pointless.

RVD goes right on offense so Rhino bails. Then RVD stupidly gloats and lets himself get clotheslined by Rhino. The offensive onslaught of Rhino doesn’t last long though, as RVD comes back and hits Rolling Thunder. RVD stays on offense, knocking Rhino to the floor and gloating some more. Momentum shifts back and forth until Rhino blasts RVD with the Gore. Rhino goes for weapons now and RVD fights back. Of course he does. They continue to brawl awkwardly as I lose all interest. Maybe ten years ago this would have been awesome. RVD hits the Van Terminator and Rhino is busted open at 12:23. This did nothing for me.
Rating: *½

Styles has been the champion since 7.22.10, and this is his sixth defense. The champion is a bit defensive in the early going, which makes sense because of their history together in the same faction. Williams dominates on the mat in the early going. Momentum shifts back and forth often, both in and out of the ring. I always wanted these two to wrestle back in the day in ROH so I’m glad I get to see them finally wrestle. Styles finally takes Williams off his feet and goes to work on his knee. Williams fights back here and there but the champion mostly keeps control of the action. Styles knocks Williams to the floor and goes for a springboard move but Williams catches him and hits the Chaos Theory on the floor! That was awesome. Back in the ring Williams hits the Styles Clash to get the win and the title at 14:48. Now that’s what I call putting someone over! The match was a really fun back and forth display, and I love how strong Williams went over.
Rating: ***¾

Alex Shelley and Chris Sabin have been the champions since 7.11.10, and this is their sixth defense. The champs run down the aisle to start the match right away. As you might expect, the action is fast-paced and all over the place from the get-go. The plunder gets involved pretty quickly too, and the challengers look to be the stronger team in the early parts of the match. Every time the Guns try to fight back, Max and Jeremy Buck have an answer for them. The champs come back and use a ladder to their advantage. Sabin makes the first attempt at grabbing the belts but gets pushed down as the impatient fans chant “we want tables.” They settle for Shelley double-stomping a ladder and a chair onto both members of Gen Me. Shelley climbs up for the belts again but for some reason jumps down and both grab another ladder. With three ladders set up everyone climbs one side but no one gets very far. The Guns use a chair to take advantage again and then set a table up on top of the three ladders. Max and Sabin get up on the table and sword fight with chairs while the belts swing. Sabin wins that battle, sending Max crashing through a table, and he pulls the belts down at 16:25. I can’t fault the effort of anyone involved, but these matches have been done to death and it’s really hard to come up with creative spots that haven’t been done before without making it look overly contrived.
Rating: ***

Dinero is aggressive early on, trying to counteract Abyss’s noticeable size and strength advantage. They quickly spill to the floor, and the opening minutes of the match are all Dinero. Finally Abyss is able to slam Dinero off the top rope and onto the casket. The referees check on Dinero but the match will continue. Back in the ring Abyss squashes Dinero in the corner. Taz compares the size of Abyss’s head to a cash register. Yes, that really happened. Dinero continually tries to fight back but Abyss keeps slamming him back down. The crowd does not care about this and I do not blame them. Abyss hits the Black Hole Slam but can’t slam Dinero in the casket yet. Dinero comes back and hits the D’Angelo Dinero Express to the back and then rolls Abyss into the casket. When he tries to close the lid though, Abyss punches through the casket right into Dinero’s groin. Well that’s creative. Back in the ring Dinero goes right back on offense. Sigh. They fight to the apron and Abyss hits a Chokeslam right into the casket and slams the lid at 11:57. This was absolutely passable and nothing more.
Rating: **

Gunner and Murphy attacked Joe during a backstage promo, so Joe is coming into this match with an injured ankle. They go at each other very slowly in the opening, trying to give off an MMA fight feel, which almost never works in wrestling. Jarrett obviously goes after the already injured leg, and Joe responds by doing the same. They fight to the floor and Joe locks on a Choke, which Jarrett actually taps out to, but since it’s not in the ring it doesn’t count. That’s fair. Back in the ring Joe locks on an armbar and Jarrett taps out again but his foot is under the bottom rope so again it doesn’t count. The fans chant “Bullshit” and they have to bleep it on the DVD, which I think is #fascist. Joe locks Jarrett in the Choke and Gunner and Murphy come running out so the referee doesn’t see Jarrett tap out yet again. Jarrett grabs an Ankle Lock and Joe submits at 9:04. I don’t believe Joe ever got revenge on Jarrett during this feud, which makes no sense. The match was meh.
Rating: **

Mr. Anderson is the special guest referee. Apparently that came with the power to make the match a No Disqualification match. Hardy has been the champion since 10.10.10 and this is his second defense. Just like the previous match, Morgan dominates the early going with his power advantage. Tazz actually says “just because there are no disqualifications doesn’t mean there are no countouts,” which is asinine. Hardy tries to come back with the Whisper in the Wind but Morgan avoids it easily. Morgan hits the discuss clothesline but it only gets two. Hardy hits a Twist of Hate out of nowhere for two. Morgan comes back with the Carbon Footprint and appears to have tweaked his knee. He goes for the Hellevator but Hardy slips out and hits another Twist of Hate for another two-count. Hardy goes up for the Swanton Bomb but Morgan gets his knees up, which does further damage to his injured limb. The champ has had enough and starts walking toward the back. Anderson tries to coax him back in the ring, and Hardy takes exception. Hardy piefaces the referee and receives a beating for it. Morgan then rolls Hardy up but can only get a two-count. Hardy comes back and hits a Twist of Hate but Anderson delivers the slowest count in the history. Well that makes Morgan look credible. Hardy uses a chair to further injure Morgan’s knee. He goes for another Twist of Hate but Morgan pushes him off right into Anderson, who goes tumbling to the floor. Morgan then hits the Carbon Footprint and the crowd almost counts to 20 before Eric Bischoff comes out with rookie referee Jackson James. Bischoff hurls Anderson into the ring post and then throws James into the ring, and then pulls him out before Morgan can get the three-count. Well that just makes everyone look stupid. Morgan sets the chair down and signals for a Chokeslam but Hardy delivers a low blow and then hits the Twist of Hate on the chair to get the pin and retain the title again at 12:31. This was even more overbooked than the last month’s match and in their efforts to protect Morgan ended up making him look like a total rube.
Rating: *¾