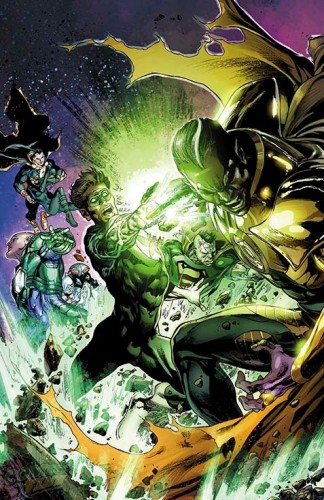 Five years ago Victor Stone should have died. Torn apart by a Mother Box, over seventy percent of his body destroyed, he should have died, but his father threw a hail mary and successfully created the world’s first Cyborg to save his son. He just didn’t know that the body belonged to The Grid. He spent years living inside of Vic’s systems, collecting data, processing it, learning from it. The only thing he couldn’t do was feel, which Vic could do, and thus led to Grid’s ejecting of Vic at the end of Trinity War. It’s been three days since then, and Grid has learned more than ever, but he still feels nothing. That desire is the only reason he has chosen to align with the Crime Syndicate. Outsider, the Alfred of Earth 3, is the only one he presumes to speak the truth, but Grid is the master of information, and using their own technology he’s found their histories.

Like Hal Jordan of Earth 3, who was a sniveling coward that was spying on his bosses at Ferris Air. Old Man Ferris is about to put a boot in his ass after catching him spying on Carol as she discusses warplanes with the military. The Ring of Volthoom calls to him, however, and Old Man Ferris is burned alive. Hal is chosen for his weak will, his endless desires that he could never obtain on his own. Abin Sur, freakishly mutated, tries to talk Jordan into taking the ring, saying it will give him what he wants, that it will be a blessing. The ring speaks to him, and greed sets in, Hal takes the ring and becomes Power Ring as Abin Sur briefly celebrates his freedom before dieing. Only one last thing for Hal to do, as the ring demands to be charged. Pocket dimensional portal? Check, but wait a second, that’s not a battery! No wonder Power Ring is so terrified of his ring!

Then there’s Jonathan Allen, on a transport to Iron Heights being driven by cops Mick Rory and Len Snart, up until Rhonda Pineda t-bones them and frees her man. A modern day Bonnie and Clyde. They’re cop killers, and all of the cops happen to be Rogues on the main Earth, which is just an awesome touch, but they take Snart and Rory hostage and make them fight to the death. Winner doesn’t get their family killed. Non-spoiler alert, the bad guys lie and with both cops dead, the only thing saving their families is backup finally showing up. They try to run, but there’s nowhere to go, they decide to accept the death by gunfire. Fate had other plans though, as lightning struck and Johnny was given the power of the lightning, while Rhonda crashed into a lab, unleashed Ray Palmer, and became Atomica. Grid believes he can learn their love.

Deathstorm is just creepy. Professor Martin Stein was the foremost expert on theoretical biology, but he was obsessed with the secret of life through death. He killed countless vagrants in his experiments with no remorse. One day he was recruited by one of the ‘heroes’ of that world, to bring down the Syndicate, but instead he used his new resources to experiment on himself, eventually fusing himself with a corpse that looks a lot like Ronnie Raymond. He’s a fusion of life and death, with complete insanity.

Finally, though, comes Superwoman…and Grid can find nothing on her. At all. She’s as anonymous as the masked stranger smiling under his hood. Oh, and despite the Grid expelling the remnants of Vic Stone…Vic isn’t dead yet.

So, is it just me, or is the charging of the Ring of Volthoom no different than being hentacle raped? Because a bunch of tentacles reach out, Hal screams, the ring laughs, and the charge is complete. I also think that the monster that would make Japanese people blush is the Indigo Entity, Proselyte. The giant octopus monster that can channel all the different shades of the spectrum.

Which would make sense, given that the First Lantern was Volthoom, a strange traveler from another universe, the master of the entire spectrum, would not need to marry himself to a single color. Hal is his puppet, and he enjoys abusing him, not unlike the way he enjoyed ripping through peoples memories and twisting them for his own amusement during the First Lantern arc on the Green Lantern books.

Ray Palmer is Atomico….I feel like “Atom” works better. I also feel like it would have been nicer to clarify the scene a bit, Rhonda gets her powers and immediately goes to our world? Or do she and Johnny go on another killing spree before that happens? Because I want to think that they had adventures with their powers, but the narration would have you believe that her powers sent her to another world.

I almost want to guess that the hooded prisoner is Psycho Pirate, but I have no idea why I think that.

Why do I feel like Jonathan Allen is Cobalt Blue? I mean, they didn’t just make him Barry, but in the pre-New 52 canon, Barry had a twin brother that he didn’t know about that was raised as a Thawne. Maybe raised by the Allen’s his name is Jonathan? Or maybe Barry is just named Johnny here?

I agree with the DC belief of Deathstorm being too cool of a name and design to not use again after Blackest Night. Especially this Martin Stein version, such a creepy awesome villain. So much better than obnoxious zombie Ronnie.

Man, everybody from Earth 3 tries REALLY hard to not say Darkseid, to the point where I wouldn’t be shocked if the supreme evil that wiped out their world wasn’t Darkseid.

So who destroyed Central City five years ago? The supreme (Darkseid) evil? It’s only for a panel, but that city is a wasteland.