Well, I guess you could say the so-called “WWE Universe” (isn’t this just the IWC with a WWE-approved title?) imploded last night with the Pittsburgh faithful letting their displeasure be known all throughout the PPV. Even in a losing effort, the crowd was fully behind Daniel Bryan, but then they started to lose their composure during the WWE World Heavyweight Championship match pitting Randy Orton (Champion) against John Cena (Challenger) for the 8,025th time. Bad became worse during the Royal Rumble itself when all thirty competitors entered the Rumble (oh, excuse me “Royal Rumble Match” – thanks, Vince!) and none of them were Daniel Bryan. Even fan favorite Rey Mysterio got booed out of the building for being entrant #30.

But the biggest culprit may have been Batista winning the Rumble. His return to WWE has been built up for weeks (after having a four-year sabbatical from the squared circle) only to have an audience turn on him in less than one week from making his return to Monday Night Raw.

According to WrestlingINC.com (via Bleacher Report) and a photo snapped by Zach Picciarelli (later posted on Twitter), Batista was legitimately upset after winning the Royal Rumble match and the caustic reaction he was getting from the Pittsburgh crowd.

So he did two things that probably won’t sit well with some of the “guys in back.” The first is that he traded barbs with a disgruntled fan who flipped him the bird (as you can see in the photo). The other, and a sight that assuredly didn’t make the PPV broadcast, was doing his own interpretation of Daniel Bryan’s famed “YES!” chant only instead of his index fingers, he used his middle fingers (click for photo). 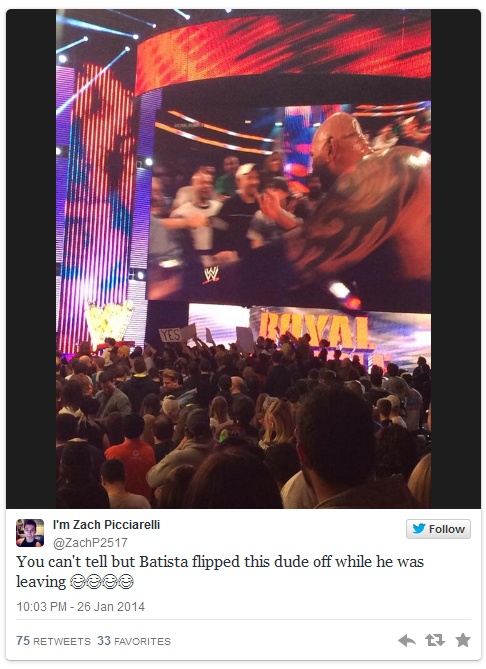