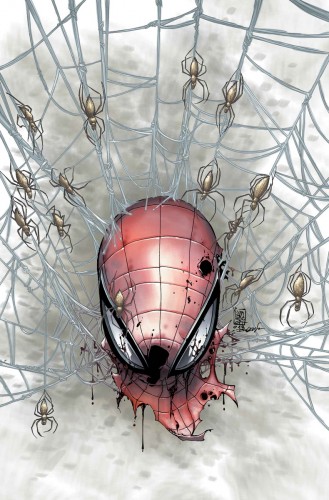 Superior and 2099 against the Spider Slayers! The Goblin is enjoying this way too much, and taunts Ock with the captive Anna Maria. So, of course, he bails on 2099 and leaves Miguel to die, as Mindscape Peter continues his journey to become Otto. The city is in flames, the Goblin’s are rampaging, and it’s literally all Ock’s fault. The cops are overwhelmed, the Avengers are busy, Cardiac’s clinic is going to get him and Spider-Man both arrested, and these Slayers…well, they’re Jonah’s brainchild, how’s he taking it? By passing the blame; first to Spider-Man, which the press want an explanation for, and then Alchemax for building the Slayers, but then Liz gets brought in on an iPad to tear Jonah a new one and slap him with all the blame.

Ock keeps chasing down Goblin’s, looking for the kidnapped Anna Maria, and being led about by Menace. In the Mindscape, Peter relives his own final moments, and sees the burst of memories that he left Ock with. He rediscovers himself, no longer a fleeting remainder of what was, he is Peter Parker, and he’s not going to quit on his life. This means forcing Ock to stop screwing up, and letting him know that Pete is back in Ghost Mode. Ock accepts this as Ghost Peter begins to see what a mess was made in his absence. The two talk, with Otto admitting that his arrogance is the cause of all of this, and that he finally understands Peter. That’s why he does what he does.

Why he brings this volume to a close, and why from here on out things are going to be Amazing.

Hey Marvel, can I have my four bucks for Black Widow #1 back? If I’d known you were going to reprint the whole damn issue less than two months later, for free, in a completely unrelated book that I do read, I’d have just waited for it. Adding this to the list of ways Marvel hates their readers wallets.

Marvel is generally filled with epic hyperbole in their copy statements. Lots of “universe shattering” and “internet breaking” without a lot of actual payoff. So when they said “It CANNOT be undone” complete with the caps (seriously, that’s from the solicit on their website), I rolled my eyes and said “whatever” before reading. And then they delivered it. Major kudos to Marvel’s marketing department for finally living up to their own hype.

If Peter feels any sympathy for Ock after all of this, then he’s a better man than me.

If Anna Maria doesn’t die, how do you explain her sticking around? Peter isn’t going to have any of Ock’s memories, which means he’s got this random girl that he was in love with last week but doesn’t know now.

How awesome is that cover?

The finals days of Otto Octavius have been interesting. He went from the King of New York, he who could do no wrong, to the guy who brought about more chaos to New York than any hero should have allowed. He finally quit passing the blame, and accepted that…yeah, he screwed all of this up. This is all on him. He’s a broken man in this issue, fighting to keep hold of the few things he has left. So, really, he finally understands what it is to be Spider-Man.