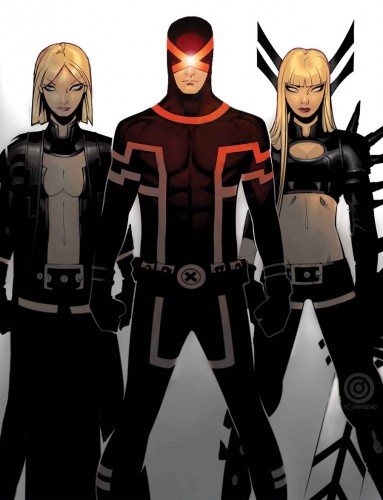 SHIELD wrap up interrogating David Bond, which is really just asking the same questions over and over and never actually listening to him. It’s back to the Helicarrier for more “Maria Hill obsesses over Scott Summers”, but this time Scott actually shows up! In her head, so only she can hear because Scott has telepaths and needs a better idea as to whether or not she’s the one sending Sentinels at him, or if he’s being played. End result…inconclusive. She isn’t doing it, acknowledges someone else in SHIELD could be, and he says it could all be memory implants and she better just prove it. He also shows her up more than a little bit.

In Madripoor, Blob wants his fix of MGH, so he goes to the source only to be cut off by Mystique, given his fix, and put in a position to feel far more important than he actually is, because Mystique had to get back to being Dazzler and getting into Maria Hill’s ear. She puts Magneto’s name on the table, as the real Sentinel Mastermind (who I need a name for) listens in from his work station. David Bond goes outside, SHIELD are still watching him, and back in Canada, Scott decides that whoever is screwing with him and his team is doing so with Cerebro, which sends them to see Hank McCoy. A reunion without Logan doesn’t seem to be going too poorly, but alas, Scott is a marked man, and trouble follows him everywhere.

So that’s how Blob got blobby again! I should have guessed that a dose of MGH might turn him back to normal, and hey, it’s not like Raven or Victor care enough about him to not addict him to drugs.

The worst part about House of M and “No More Mutants” is that nobody had an exit strategy. I don’t care how serious you are about your new status quo, you always build in an exit strategy just in case. Now, given that it didn’t even take them ten years to reverse that status quo, I can’t imagine they’re pleased to have to pull some random answer out of their collective butts.

Still think the master Sentinel maker looks like Archer from Mackie’s X-Factor. I mean, I seriously doubt he is because that run is long forgotten and probably retconned out of existence already, but the white dome face is the same visual.

Wait, is Scott being attacked at the X-Mansion, or are his powers going crazy?

And why isn’t Wolverine trying to gut him?

I love the Stepford sisters and what Bendis has done to them. Their invasion of Maria’s mind is one of my favorite moments of the week.