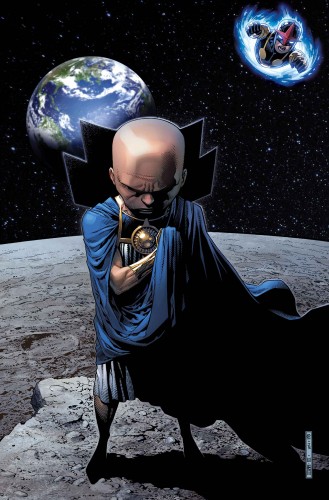 All Sam Alexander was a father he could be proud of, but instead he got a drunken janitor who told crazy stories about being a space warrior and then up and vanished. Thing is, the stories were true, and Sam now has his dads helmet and is the new Nova. He’s gone through some stuff since then, but one thing he keeps coming back to is his ‘buddy’, Uatu. Doesn’t talk much, but he listens well. Something that is pretty nice to have when you’re a mentor-less rookie superhero (don’t tell Speedball and Justice). I mean, Sam is fighting an Aztek Death God who winds up being a robot, that’s advice any good mentor could dish out. The Avengers show up to tell him he did a good job, and he mentions Uatu, and then poses them a question they’ve never asked. Why does he watch?

So that’s Sam’s new mission, self assigned, to figure out the why of Uatu. He comes bearing gifts, and Uatu silently leads him through his home. The helmet sends him some warning buzzes, but all he does is lose sight of Uatu, and instead find himself face to face with the Ultimate Nullifier in the heart of the armory. He’s smart enough to know that he needs to leave that particular room without touching things. Helmet is still going nuts, though. He finds the Watcher watching an old moment, and the Watcher’s origin stands revealed to Sam. About the time they interfered, and the outcome faced by the population they sought to help. Then he gets an idea about what exactly Uatu does, as he sees time open up around him, and then the multiverse. Infinite possibilities unfold before his eyes, and it becomes too much…until Sam notices the one constant. There is no reality where his father wasn’t wrong. They bond over that, in their one sided “Uatu does not speak” sort of way…and then Uatu speaks. He also keeps the present Sam gave him.

This reminded me of Avengers vs. X-Men #0 for all the wrong reasons. A lead in issue by a different creative team than the actual event, who put the focus on two characters who seem central to the event, but then wind up not being anywhere close. We already know Uatu dies, so his importance is going to be more tangential than anything else, so what are the odds that Nova gets moved to the backburner for the event?

Well no a shit a race evolved from nothing to super advanced over a ten year span isn’t going to be cultured enough to not nuke themselves out of existence.

Nobody has ever asked The Watcher why he watches? That’s either bad writing historically, or the most convenient retcon ever. Because the alternative is Captain America and Iron Man admitting to being completely incompetent and not grasping that motivation might be as important as the actions it leads to.

So now we know that Uatu watches because he wants to find a reality where his father didn’t screw up. That’s cool. Why do the other Watcher’s do it?

I didn’t hate this book, I mean, it was definitely enjoyable, but nothing happened from start all the way until the “Wait, it’s over?” ending. Seriously, the book ends with a scene that makes you feel there’s more, but nope, nada, not even a “The end” or a “To be continued” on the panel. The obligatory Original Sin ad fills that role.