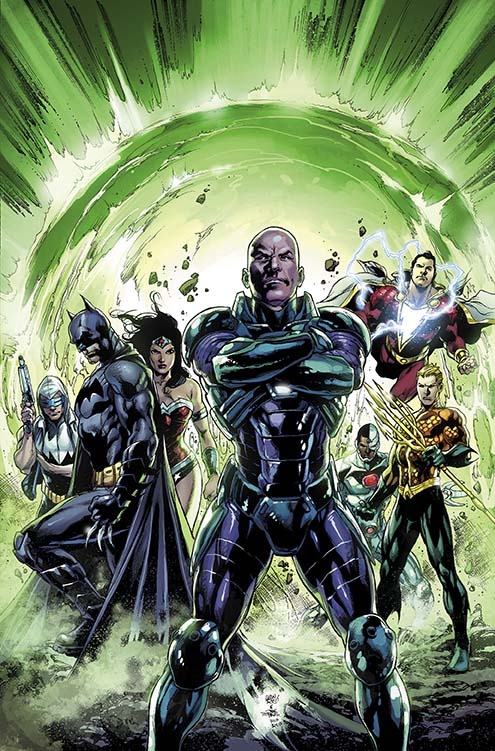 “Chapter One:  Kicking Down Doors”

The story opens with the Secret Society of Villains plotting against the Justice League only to be confronted by them (with a few new members).  Four days earlier, everyone at the Daily Planet is less than impressed by the news that Lex saved the world.  Clark and Bruce are talking and are having difficulties with this revelation as well.  Meanwhile, other League members are searching high and low for Lex, but to no avail.  Over in Central City, Captain Cold is having a discussion with his parole officer about his past and present.  The League manages to track down Lex to the new Watchtower who is with Shazam.  Lex offers himself up to a lie detector test (in lasso form) and allows the members to ask him questions.  Superman refuses to trust Lex who decides to leave despite wanting to be in the Justice League.  Cyborg has a theory about how to track down the threat that ravaged Earth 3, which briefly introduces us to Jessica Cruz.  The issue ends with Lex paying Bruce a visit at his home in Gotham (this was actually more cliffhangerish than how I described it).

This was a very good issue.  Thankfully Johns has been able to successfully revive Lex in the New 52.  Up until Forever Evil, I feared that Lex’s character was beyond saving.  He was the star of this issue and I really enjoyed his confession while bound by Wonder Woman’s lasso.  He spends the issue trying to convince everyone that he’s turned over a new leaf and is really convincing while doing so.  However, it’s Lex and we should know better, but the answers he provided the League were good enough to make readers question his intent.  I loved how he spun his efforts fighting the Crime Syndicate with the press while comparing himself to firefighters, etc.  He’s convinced the entire world (with the exception of everyone at the Daily Planet) that he’s a hero and his involvement with the League is going to make this title much more interesting.  I also liked how the upcoming conflict (the destroyer of worlds) plays such a large part with Lex right now.  While watching Wonder Woman take down the Metallo with the Flash, it reminded me that it’s been awhile since we’ve seen the League members in action since they’ve been missing since the conclusion of the Trinity War.  I enjoyed seeing Shazam because he is still a bit naive in his dealings with the League.  I want to see how the new members (Lex, Shazam, and Cold) are brought in and how some members leave (Superman and Flash).  I didn’t think it was possible that there could be a bigger chickens$!T than Harold Jordan (Power Ring), but that was before we were introduced to Jessica Cruz.  Upon first hearing about her becoming Power Ring a few months ago I groaned, but hearing how the ring recruits her made me reconsider that.  Also, I want to see how much Cyborg can learn from it.  Speaking of Cyborg I’m also looking forward to seeing what role the Doom Patrol will be playing in the near future as their appearance in this issue had them coming across as less than happy with the League.  The cliffhanger with Lex using his newfound knowledge about Batman (which he learned from Forever Evil #7) is setting up a very interesting confrontation the next issue.  The art duties were shared between Reis and Mahnke, which is pretty sweet.  I really liked Mahnke’s rendition of Sinestro severing Power Ring’s connection to his ring.  I like Mahnke’s exposition scenes and Reis does a good job overall.  The colours really stood out on some pages and were very well done.  I really enjoyed this issue.

I liked how Flash poked fun at Batman for his one-liner about bugs.  However, there was something about it that I just didn’t care for, which I’ll go into another time.  I didn’t mind how Batman was humbled during Forever Evil, but I’m concerned about what his role will be in the League for the next while.  There’s an outcome I’m hoping for here, but I’m not sure where it’s going yet.  Speaking of Batman, I didn’t really care for his appearance on the Reis pages.  Overall I said I liked Reis’ work in this issue, but there were a few panels that I didn’t care for that much.  With Mahnke, my only complaint is that he hasn’t gotten an event yet (Final Crisis doesn’t count because that was by default).  That one panel of Sinestro and Power Ring just made me think how much I’d like to see him handle a major storyline.

Buy It.  This was a good issue from cover to cover.  Often the issue after a major event can be really slow, but this one was entertaining and a decent follow-up to Forever Evil.  There are many plotlines that have been introduced that I’m looking forward to seeing resolved in the future.  Lex Luthor being a part of the League has me looking forward to this title more now.  The new lineup provides some interesting storylines and conflicts as well.  I definitely enjoy these additions to the lineup than the previous ones (I couldn’t stand Atomica).  I’m glad that Lex continues to get some good exposure and that he’s now being written as he should be.