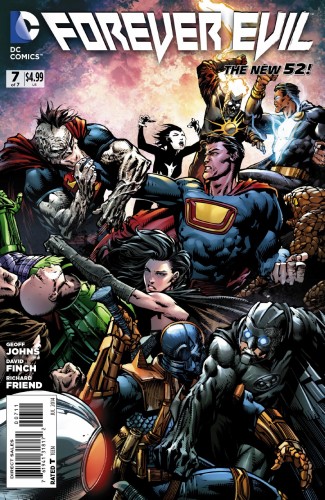 Lex Luthor can only think of how people expect certain things of him, usually the worst, as Batman tries to choke the life out of him. He did just kill Dick Grayson, after all. He has to shock Batman off of him just to get the words out, though, because Batman doesn’t seem to think Luthor could have a plan; let alone one good enough to save everyone in the room. The bomb was going to detonate unless Dick’s heart stopped, so Lex stopped it with a pill, and brings him back with adrenaline. Batman hugs his son, and Bizarro, feeling the mood, goes to hug Papa Lex. That’s when Grid takes a few steps into the room before falling over in a heap. Cyborg is back and better than ever. The heroes and villains split up, heroes to save the League, villains to stop the Syndicate, and Luthor is still the smartest man in the room.

The Syndicate is trying to regroup with whoever is left to stop the Mazahs empowered Alexander Luthor, but when Superwoman reveals that Luthor knocked her up, well….let’s go see how everyone else is doing! The heroes need to find someone that’s in love with Wonder Woman in order to get them free, but Superman is stuck inside of Firestorm with her, and Steve Trevor is knocked out, so…well, back to the Syndicate! Alexander Luthor is pissed off, empowered by every Syndicate member he’s killed, and kicking the crap out of Ultraman while killing off other members for more power, while our Luthor looks on with what can only be assumed to be fear. He asks Cold who he is, and gets what explanation Len can offer while Alexander beats down Deathstroke and Manta, turns his assault to Luthor, but then Bizarro with the save! And the being beaten to death…alright, Lex is furious, and, again, smarter than anyone, including his other worldly counterpart. And Ultraman.

Obviously the say winds up saved, because this is a final part of an event, which means the heroes all get free, Ultraman winds up a powerless broken husk of a man, and Atomica…needs to be wiped off of a shoe. Superman is still dieing from the kryptonite in his brain, but hey, Lex Luthor can help! And he does, he saves Superman’s life, and he tries to offer his allies a second chance…none of them take it. Luthor does though, he truly embraces this second chance he has to be a better man. He brings young Ted Kord in to talk about his father’s company, the one he was going to take over so ruthlessly just at the start of this series, and he encourages Ted to take the reins himself. His people talk to him about his Superman clone, and he insists that his new clone be more Bizarro than Superman. He also deciphers one of the biggest secrets that the DC Universe has to offer!

Finally, Superman says what everyone is thinking. That Darkseid is the force that destroyed their world, and he’s still out there. Which, I mean, he is, but Superman fails to realize that the Syndicate’s world was destroyed by another epic villain.

Man, Geoff has become a master at taking a final issue and using it to set up something two years in the future and get everyone all antsy over it. Remember when Blackest Night was set up at the end of the Sinestro Corps War? This is bigger.

Elephant in the room, but seriously, honestly, who thought David Finch was good call for this book? The quality of his work has dropped more and more with each issue, and this issue was delayed, presumably due to the art, and is still…well, ugly. Really ugly. When you’ve got guys like Ivan Reis and Doug Mahnke consistently doing blockbuster work, and with no delays to speak of, why is the event handed out to the guy who rushes every other panel?

Everyone looks sad all the time, or stone cold super serious, or like freaky monsters. I can’t tell if Luthor is devastated or simply enraged by Bizarro getting killed because the faces are saying “sadness and loss”, but the words aren’t clearly getting it all across. I can’t tell if it’s an emotional “Luthor feels the pain of loss of someone whom he created, who died to save him” or if it’s the angry child “Luthor is mad that the guy broke his toy”.

You know what this series needed? An issue showing Alexander Luthor slaughtering Syndicate members on their Earth, or even just the origin of his powers, because I can’t wrap my brain around “kills you takes your powers”. There’s nothing uniform about it, either. He crushes Deathstorm’s head, and then he puts a hand through Bizarro’s chest. Yes, he’s strong, but how do these things give him powers?

I feel like a tremendous opportunity was missed by having Superwoman be so flat and two dimensional throughout this series. Of the Syndicate members, she received the least amount of attention and characterization, and the end result is me not really giving a damn about her, her baby, or that she cheated on Owlman and Ultraman both to get knocked up by Luthor. Hell, I’m shocked the feminerd (word in progress, the goal is to not offend but to make it clear who I mean) blogs haven’t gone all out assault on this book yet because she just wanted to screw and get knocked up by the strongest there is. She literally is defined in this series by who she sleeps with and nothing else.

Last time Black Adam transformed back into his human self, he turned to dust and died. Why would he entertain the idea of that maybe happening again?

Sinestro and Black Adam are a natural duo. Neither is a villain, per se, though both share that perception in the eyes of the heroic community. Both are hyper violent and willing to kill, but in both cases it’s been (at time in Sinestro’s case) to protect their home. Black Adam will slaughter an army in protection of Kahndaq, but he’s hardly going to run around and rob banks or pick fights with the Justice League. Sinestro would have done anything for Korugar, which is why he turned it into a police state. In his misguided judgement, he assumed he was protecting his people via control. The two together would make for some REALLY interesting character developments, and I would love to see it expanded upon.

Can we give Geoff Johns a prize for saving Lex Luthor? It wasn’t that long ago that I wrote a piece tearing apart DC’s treatment of one of their premier characters, as his New 52 self jettisoned the brilliant mastermind in favor of a super villain obsessed with killing Superman. I mean, for the love of crap, the man was a prisoner in a jail built just for him, based on designs he created for a jail he couldn’t escape. He’s Lex Luthor, not a crappy Bond villain. He transcends good and evil to be simply…Luthor. So thank you, Geoff Johns, for bringing him back. Thank you for taking him seriously.