As part of Diamond Distributor’s Las Vegas 2014 summit, on Sunday May 18th a dinner was had for retailers and comic book company representatives.

At the dinner, representatives from Marvel, Dark Horse, IDW and Dynamite shopped their upcoming goods to retailers. While Image Comics didn’t present at the dinner, they made retailers happy by funding the open bar for the evening. ;) The dinner ended with DC Comics Senior VP for Sales Bob Wayne presenting DC Comics’ pitch. There wasn’t a lot of new “news” from Bob Wayne, but what was interesting was how he pitched the cancellations of six ongoing series in August 2014. 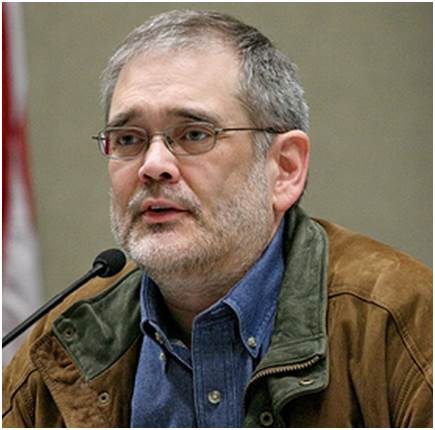 Bob Wayne essentially told retailers that DC is putting out weekly comics to bring the excitement back to comics and bring readers into their stores weekly. To help them sell the weekly series, because retailers can only carry so much product, DC was cancelling several series in August 2014. (I’m sure their poor sales figures helped in the axing decisions too.)

Now Bob is known for his dry humor, but it would seem DC is doubling down on its weeklies: The New 52 Futures End, Earth 2 World’s End and Batman Eternal. It also appears Harley Quinn will be shipping twice monthly.

With Wayne’s comments about making room in DC’s publishing line for its weeklies, all this would seem to be the final nail into the New 52 branding coffin of DC Comics. Despite opening up their New 52 with 52 ongoing #1’s, and DC Comics Co-Publisher Dan DiDio repeatedly indicating that DC Comics’ New 52 will always be “New” and “52”, it seems the New 52 of the covers has less to do with DC branding and the number of ongoing series it has set in its core super-hero universe. It seems it really only refers to the 52 earths in DC’s multiverse.

In fact, DC’s September 2014 solicitations features 41 comics as part of the New 52 Futures End 3D comics month. That INCLUDES those six cancelled titles from August, a new Booster Gold #1 and a skip month for the Secret Origins ongoing series. 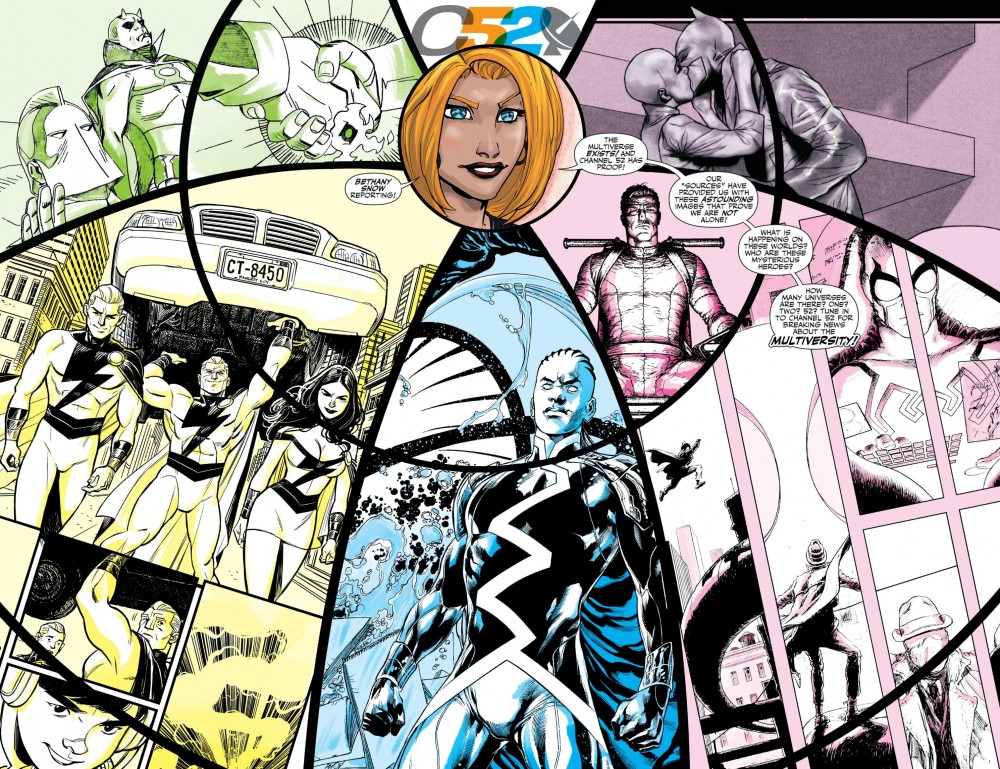 However, despite the cancellations of six ongoing series in August 2014, we do get some good news in DC’s August solicitations. The long anticipated launch of Grant Morrison’s Multiversity limited series with a brand spanking new issue #1 hits stands that month.

And, since we learned that Grant Morrison’s Multiversity and all three of DC Comics’ New 52 weekly series would end at the same time in Spring 2015, fans were wondering what did this all mean. Last week’s Forever Evil #7 finale, MAJOR SPOILERS HERE, helped shape what the potential event of next Spring 2015 is. Hmmm. 30th Anniversary of the Crisis on Infinite Earths is that month too. Hmmm.

Here is the solicitation for Multiversity’s kick off. 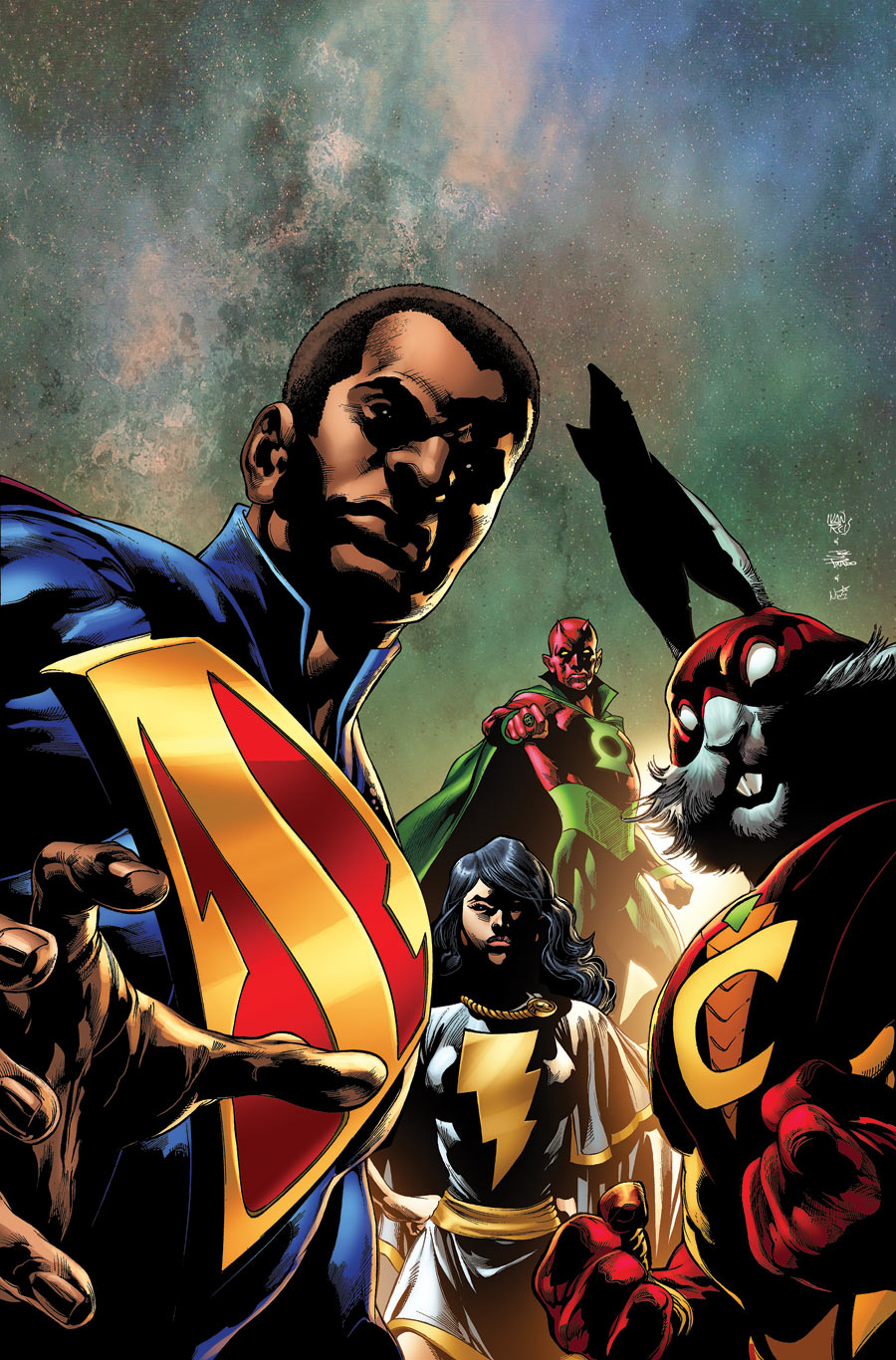 The biggest adventure in DC’s history is here!

Join visionary writer Grant Morrison, today’s most talented artists, and a cast of unforgettable characters from 52 alternative Earths of the known DC Multiverse! Prepare to meet the Vampire League of Earth-43, the Justice Riders of Earth-18, Superdemon, Doc Fate, the super-sons of Superman and Batman, the rampaging Retaliators of Earth-8, the Atomic Knights of Justice, Dino-Cop, Sister Miracle, Lady Quark, the legion of Sivanas, the Nazi New Reichsmen of Earth-10 and the latest, greatest Super Hero of Earth-Prime: YOU!

Comprising six complete adventures – each set in a different parallel universe – plus a two-part framing story and a comprehensive guidebook to the many worlds of the Multiverse, THE MULTIVERSITY is more than just a multipart comic-book series. It’s a cosmos spanning, soul-shaking experience that puts YOU on the frontline in the Battle for All Creation against the demonic destroyers known as the Gentry!

In issue #1, pencilled by superstar artist Ivan Reis (AQUAMAN, JUSTICE LEAGUE), President Superman of Earth-23 uncovers a threat to all Reality so apocalyptic it will take a team of incredible heroes from across the Multiverse to face it – including Captain Carrot, like you’ve never seen him before!

But even with a multitude of alternate worlds to choose from, where every variation is possible, can anyone hope to prevail against the onslaught of ultimate evil and undying hatred – in the unstoppable form of a one-time cosmic defender with unimaginable powers?! Join us, if you dare, for the beginning of THE MULTIVERSITY!

Former UFC Fighter Paige VanZant Is All Elite With AEW!