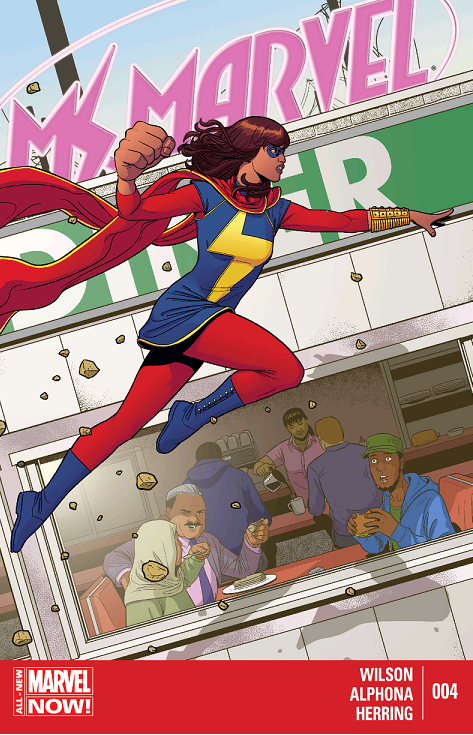 Summary (contains spoilers): At the end of the last issue, Kamala was trying to stop a robbery at the convenience store where her friend Bruno works. She was still pretending to be Carol Danvers, and her surprise arrival leads her to get accidentally shot by the would-be thief, Bruno’s younger brother, Vick. Bruno tells Vick to get out of there.

Kamala reveals her identity to Bruno, and when she shifts back to her normal self, the bullet wound is gone. They are able to put together a hurried disguise by the time the cops get there. 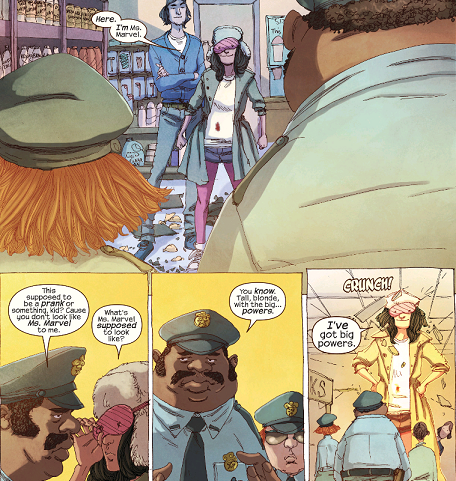 Kamala wants to help Vick, so she decides if she’s going to be a superhero, she needs to get a real costume. She heads home and asks her mother for her burkini (basically a unrevealing bathing suit). Kamala’s mom is still intent on keeping Kamala grounded because of her sneaking out in the first place. I was totally waiting for her to say, “But Mom, if I didn’t sneak out, I would have totally missed my origin story.”

Bruno uses the GPS in his phone to track Vick to an abandoned house in the Greenville section of Jersey City. Vick is in trouble with his new “boss” The Inventor for almost getting arrested. Ms Marvel beats up the world’s most goofy looking “muscle” and breaks into the house. She’s immediately attacked by a small robot, which freaks her out. She manages to crush it, just in time for several more robots to join the fight. She rushes into the basement to get away, and find’s Vick tied up there in front of a sign that says “Property of the Inventor.” She promises to save him, and immediately more lame looking muscle show up to stop her, this time packing high tech weaponry. 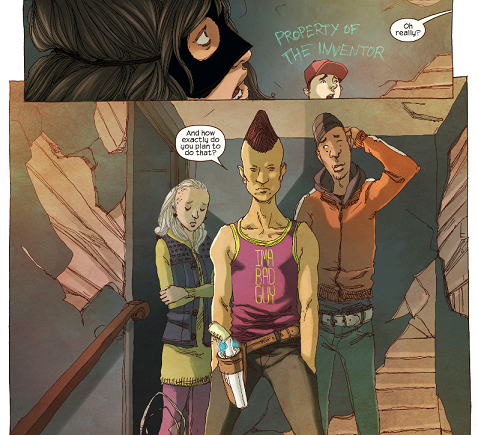 Review: I will admit, it’s really hard not to be jaded about this book’s chances of surviving. I love the character and I love the series, BUT, there have been lot of new characters over the last few years I’ve been interested in that just ended up falling off the map after hot debuts. Gravity, Arana, Sentinel, DC’s new Ray. Even the Young Avengers basically got two series that both lasted less than 15 issues.

Because of all this, I am trying not to get too attached to the new Ms Marvel…but that is proving to be close to impossible. We share a home town, she goes to my old high school; and Marvel seems to be giving G. Willow Wilson the freedom to do a lot of different things here.  Kamala’s roots run deep, but at the same time, we get to see her struggle to find herself. There is a lot of strain here between who she thinks she has to be, who she wants to be, and who she really is. It’s an identity crisis most teenagers can relate to, not just children of immigrants or Muslims.

At the same time, being a child of immigrants and the Muslim angle does allow this book the potential to deal with more serious issues if Wilson decides to go that route. I suspect that in her hands, Ms Marvel can be a very powerful vehicle for some important story telling.

But for it’s opening arc, Ms. Marvel manages to stay mostly light. Kamala and her family are engaged in a lot of push and pull, and it creates a real interesting dynamic, but Wilson manages to show the more playful side of things, and I think that was the right way to go with this series. There are already more than enough serious comics out there.

One thing I loved about this issue is that Kamala decided to go for a more modest costume, and that this new Ms Marvel’s base appearance isn’t tall, blond haired, and blue eyes. Not to mention she’s not a big-breasted pin up. I saw a lot of people freak out at the end of the first issue when she shape-shifted to look like Carol Danvers, and I kept telling everyone “calm down…this is part of her journey to figure out who SHE is as a hero.” Nice to see my faith was rewarded (though since she was wearing this costume in her first appearance, it was sort of obvious). 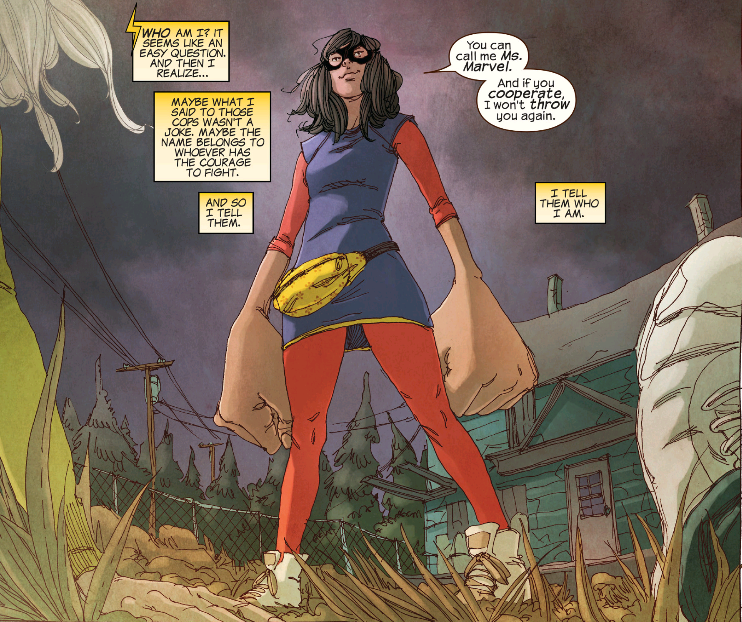 I’ve been a fan of Adrian Alphona’s work since Runaways, and this book is really just more of the same. He does a great job giving each character a unique look. I especially loved the lame goons who work for the Inventor. Alphona also does a great job showing off Kamala’s still developing shapeshifting powers.

The bright and colorful art seems like it could really appeal to a younger audience if marketed right.  Unfortunately, most of the marketing for this book I saw focused only on the fact that Ms Marvel was Marvel’s first comic headlined by a Muslim character.  BUT, at it’s heart, it’s also a real solid all ages superhero title.

My only real concern is that we are four issues in, and things are moving real slowly. I don’t mind the deliberate pacing, but I would love to see the story moving forward more. We don’t even know who the Inventor is or what he’s all about. Ending this issue with Kamala being confronted by lame-o teen goons just feels real anti-climatic.  Especially since we’ve already seen her in action against The Inventor in her first appearance in All New Marvel Now Zero (or whatever that book was called).

Ms Marvel is just a fun and enjoyable comic book. It kind of weirds me out that the same company can put this out at the same time as the rather disturbing Original Sin….but they do say variety is the spice of life, right? I would like to see more forward movement, but that doesn’t dull my enjoyment of this book at all.  And besides, it’s rare I get to review a Marvel title that is ONLY 3 bucks!

Final Score: 8.5: This series might be moving a little too slow, but the journey is definitely a fun one.