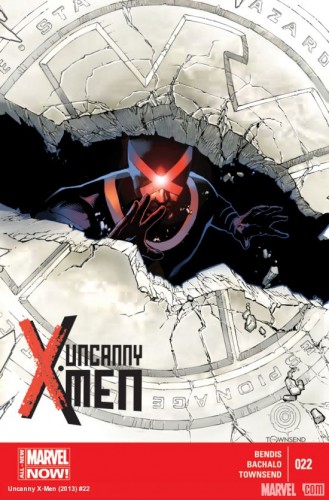 The new Xavier school gets a random visitor, in the form of Magneto and an unconscious Dazzler in need of some major healing after the shit Mystique has put her through, thankfully the school has a damn good healer, and now Dazzler is pissed. Speaking of pissed, SHIELD is bombing the crap out of the Jean Grey School in New York as the mysterious bad guy keeps playing everyone against each other, and everything is just gone to hell. Maria Hill wants Washington to know that they were hijacked, Beast wants a full evacuation, the villain knows that Beast knows who he is, and then in come the Sentinels! Thing is…the Sentinels aren’t attacking, much to the anger of the bad guy. In fact, everythings seems under control in the sense that the hellfire isn’t being unleashed. Why? Because Hijack is back.

Seriously, Hijack saves the day, and it’s awesome, and all Maria Hill can think is “he’s too powerful” while Iceman is all “THANK GOD HE’S TOO POWERFUL!” because, you know, Iceman is awesome. Scott starts barking order, but Hank pulls him aside to not be an asshole for the first time since finding out that X-Force existed. He tells Scott what broke his and everyone elses powers. Scott sends Magik back for reinforcements, and with Magneto and Dazzler there, they definitely have backup. Scott and Hank go after the mastermind, and it’s a cool reveal that immediately is wiped out by pointless death. Maria Hill tries to assert some dominance during cleanup, but given how she’s been treated through this, it fails miserably. Scott lets her know that this is all her fault for being useless at her job, then Dazzler tells her to screw off when they try to arrest her because Mystique replaced her while she was on the Helicarrier.

And with that, it seems the first extended X-Men vs. SHIELD arc is over.

What a waste of Dark Beast. You have him by the mysterious bad guy, which makes no real sense when you consider that all of his issues in this book have been with Scott, but the only issues of his we have any clue about are with Hank. Then they go ahead and kill him on the same page as the reveal and explanation, essentially rendering the whole damn thing moot.

So are everyones powers fixed now? We know why they were broken, and Beast said Scott would, literally, crap it out but…what about the X-Men that weren’t under Hank’s care? Can Emma go back to having powers? Does Magneto get his badass card back?

Can Dazzler join this team of X-Men? I want to see her angry, bitter, dressed in black, and being a badass.

I really don’t think Bendis understands how to write Maria Hill and her remain competent. Anytime she shows up, dating back to New Avengers, it’s to be a complete and utter bitch and to screw up EVERYTHING to insanely epic degrees. Other writers have done great jobs showing why she has a job, but every time Brian gets a hold of her…honestly, how does she not lose her job for this? Her response to everything goes kaboom is to call in that it’s not her fault. She sees Dazzler walking around, calls for her, is ignored, issues a SHOOT ON SIGHT order. Um, what? You’re asking for her help, she ignores you, so you tell people to kill her? And she tries to tell Scott that it wasn’t her fault that someone infiltrated her organization and used her resources to wage war on the X-Men, because the bad guy was a mutant! Well, if that’s the case, then job well done Agent Hill! You’ve learned how to blame mutants for your problems!

I need to write a column at some point about Marvel/Bendis needing to get a grasp on how much Mystique can believably do at once. It’s becoming increasingly easy to forget that she isn’t the only A list X bad guy.

I call shenanigans that Quentin Quire didn’t do more.

I think everyone forgot about Scott’s most wanted terrorist status quo at some point in the issue. Hopefully that can continue, as I would be soooo happy to not see him fight SHIELD for at least ten issues.