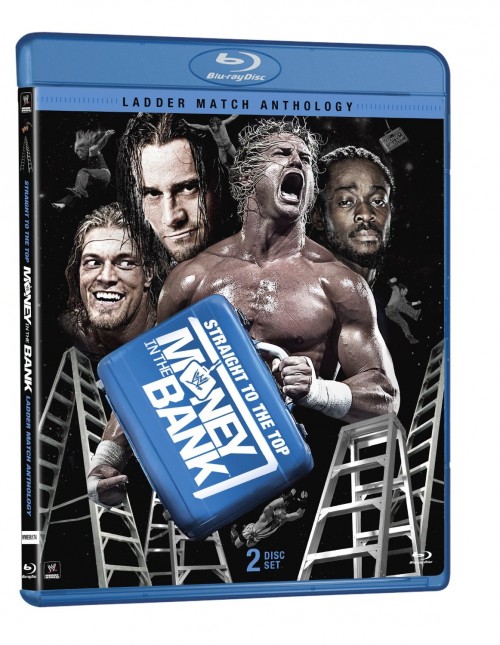 Cena has been the champion since 4.3.05, and this is his unlucky thirteenth defense. Edge is using his Money in the Bank title shot here, and handing the briefcase off to Vince McMahon on his way to the ring is a nice touch. Cena already defended the title earlier in the evening in the Elimination Chamber, so Edge is obviously the aggressor. He hits the Spear but Cena kicks out at two! Cena slowly makes his way back to his feet, and Edge hits another Spear. This time it’s enough to get the pin, and Edge wins his first WWE Championship at 1:47. It obviously wasn’t much of a match but it was a great way to pay off the first Money in the Bank match.
Rating: ½*

Cena has been the Champion since 1.29.06, and this is his seventh defense. He is the most hated man of all time in the Hammerstein Ballroom. RVD of course is insanely over. This is the “If Cena Wins, We Riot” sign match. Cena throws his hat and his shirt into the audience, and they throw it back! He tries again and it keeps getting thrown back at him. The fans throw toilet paper at Cena and chant “Cena Swallows.” They chant “You Can’t Wrestle” as Cena hits a Fisherman Suplex for a one-count. Cena tries to follow up but RVD kicks him in the face so Cena bails. Back in the ring they trade shots an d the crowd responded with “boos” and “yays.” RVD wins the battle but Cena cuts him off with a powerslam for two. Cena clotheslines RVD to the floor and the crowd chants “same old shit.” The Champ responds by hitting a club to the back from the top rope. Cena throws RVD around ringside a bit. RVD fights back and hits a moonsault press off the stairs. He goes for another one off the guardrail but Cena shoves RVD out into the third row! Cena bravely goes out into the crowd, which is pretty gutsy. They make their way back to ringside and RVD is able to drape Cena off the guardrail and hit the corkscrew legdrop. Back in the ring RVD is still in control. RVD kicks a steel chair into Cena’s face for a two-count. He follows with Rolling Thunder on a chair, hurting himself but hurting Cena more. RVD slams Cena down and puts a chair on top of him. He goes for a split-legged moonsault but pushes the chair up into RVD’s face. I don’t know how that’s so much worse than what RVD was planning but whatevs. Cena hits a hard DDT right on the chair but it only gets two. He sets up a chair between the top and middle turnbuckles and catapults RVD’s face right into said chair. Again that only gets a two-count. Cena hits a Protoplex and the Five Knuckle Shuffle. The Champ seems to be enjoying being the object of everyone’s hatred. Cena goes for the FU but RVD slips out and hits a spin kick to the face. Back on their feet Cena goes on offense once again. RVD tries to go for a moonsault but Cena pulls him off the top rope with a slam. That gets two. RVD comes back and awkwardly dumps Cena to the floor. He dropkicks Cena off the apron and into the guardrail. RVD brings a table into the ring and leans it against the corner. Cena is able to grab a drop toehold and he traps RVD in the STFU! RVD reaches the ropes and the referee forces Cena to break the hold. Why? It’s an Extreme Rules match. The referee mouths off so Cena takes him out with a clothesline. That ref had it coming. RVD is up top but Cena knocks him down and hits a superplex. Cena goes out and grabs the ring steps. He brings them into the ring and bashes RVD in the face with them. Referee Nick Patrick runs out to make the count but RVD kicks out at two! Cena delivers an FU to the floor. Back in the ring a man in a motorcycle helmet runs out and hits Cena with a Spear right through the table! The man turns out to be Edge! The crowd chants “Thank You Edge!” RVD takes the opportunity to go up top and hit the Five-Star Frog Splash! Paul Heyman comes in to make the count and RVD wins the title at 20:39! That was a classic match for the crowd reactions alone. In addition to that both men wrestled great matches. RVD did his usual thing, which was exactly what the crowd needed to see, and Cena adjusted and heeled it up as much as he could in front of this crowd. This kicked ECW off with a bang, and it would never be this fun again.
Rating: ****¼

Undertaker has been the champion since 4.1.07, and this is his third defense. The match starts with Undertaker flat on his back from the steel cage match with Batista and the beating at the hands of Mark Henry. Edge goes for a quick cover but Undertaker kicks out, twice. Undertaker tries to sit up but can’t. He uses the ropes to pull himself up, and Edge cuts him down with a spear to win his first World Heavyweight Title (third World Title overall) at 1:23. This feud would continue on and off (mostly on) for the next year and a half.
Rating: ¼*

Edge has been the Champion since 6.1.08, and this is his second defense. The poor Champion was just the recipient of a brutal beating and a Batista Bomb at the hands of Batista, so he’s easy pickings. Punk hits Go 2 Sleep and scores the pin in 0:12 to win the title.
Rating: DUD

Since we just saw Hardy win the title moments ago this is obviously his first defense. Punk hits an immediate Go 2 Sleep, but Hardy kicks out! He picks Hardy up, and the new champion gets a quick inside cradle for two. Punk drills Hardy with a kick to the head and one more Go 2 Sleep, and this one is enough to put Hardy down and we have our second NEW World Heavyweight Champion of the evening at 1:02. Once again WWE comes up with the perfect place to use the Money in the Bank title shot, and Punk is a two-time World Champion.
Rating: ½*

Jericho has been the Champion since 2.21.10, and this is his second defense. He is in rough shape after Edge came out to interrupt his promo and flattened him with a Spear. Swagger comes out and first hits Edge with the briefcase. He gets in the ring and calls for a referee, who takes his sweet time calling for the bell. Even so, Swagger hits an immediate Gutwrench Powerbomb to get the pin and win the title in 0:10.
Rating: DUD

Mysterio has been the Champion since 6.20.10, and this is his second defense. He tries to avoid his much larger challenger but Kane catches him and hits a thunderous Chokeslam. Kane picks Mysterio up and hits the Tombstone Piledriver to get the pin and win the title at 0:53. That was what it was.
Rating: ¼*

Orton has been the Champion since 9.19.10, and this is his fifth defense. He just made his fourth defense, against Wade Barrett, and his knee is in rough shape. Orton isn’t quite as prone as Champions usually are upon cash in, so this is slightly interesting. Miz goes right after the injured knee, attacking it viciously. He slams it off the ring post repeatedly. Orton fights back with a clothesline and a European Uppercut. He tries the Rope-hung DDT and can’t hit it, but he can catch Miz with the snap powerslam. Orton calls for the RKO but Miz counters to the Skull Crushing Finale for the pin at 2:44. And thus the Angry Miz Girl is born. I’m surprised it only took one finisher for Miz to put Orton away, so he comes out of this looking better than a lot of cash ins.
Rating: *

Punk has been the Champion since 7.17.11, and this is his second defense. He just got done with an exhausting match against John Cena to determine the Undisputed Champion, and then suffered a Jackknife Powerbomb at the hands of Kevin Nash. Punk gets to his knees and Del Rio drills him with an enziguiri to score the pin at 0:13. That’s probably the first time since Owen versus Shawn that an enziguiri ended a match.
Rating: DUD

Show has been the Champion since 12.18.11, and this is his first defense. He just won the title from Mark Henry, who viciously assaulted him with a steel chair after the bell. Bryan comes out and immediately covers Show and gets the pin at 0:09. Not much to say about that.
Rating: DUD

Punk has been the Champion since 11.20.11, and this is his fifteenth defense. This is the second time that the Money in the Bank winner announced his intentions to cash in ahead of time, so this is a regular match, the main event of the historic 1,000th episode of RAW. Cena starts by working a headlock and Punk comes back with a backslide for two. Momentum shifts between these two long-time rivals, as neither man can gain a sustained early advantage. Punk throws multiple strikes, while Cena goes back to the headlock. The Champ escapes that with a back suplex and he focuses on the back now. They trade strikes, with the crowd saying “yay” for Punk’s and “boo” for Cena’s. Even so, Cena is able to fire up with some of his Moves of Doom, but Punk cuts him off and hits the running knee in the corner. Punk goes for the bulldog but Cena counters with the Protoplex. Cena signals for the Five Knuckle Shuffle but Punk kicks him in the face. Punk follows with a solid kick to the head and it may be time for Cena to Go 2 Sleep. Cena fights out and shoves Punk right into the referee, knocking him out. That’s too bad, because Cena hits the Attitude Adjustment but there is no referee to make the count. While Cena goes to check on the referee, Big Show makes his way into the ring and hits Cena with a Spear. Show follows that with the WMD and Cena is out. Punk gets the referee back in the ring to make the count but Cena kicks out at two! The Champ picks Cena up for another Go 2 Sleep but Cena counters it into the STF! Show runs back out and clubs Cena across the back to draw the disqualification at 11:14. That just didn’t have the same electricity as other Punk/Cena matches for whatever reason. It’s Punk and Cena so of course it’s good, it just lacked spark.
Rating: ***

Del Rio has been the Champion since 1.11.13, and this is his fourth defense. He just got done wrestling a handicap match against Jack Swagger and Zeb Colter, and his ankle is in terrible shape. Ziggler has his bodyguard Big E Langston and his girlfriend AJ Lee in his corner. The crowd is insanely behind Ziggler as he goes crazy on Del Rio, stomping him down and hitting the Fame-Ass-Er. Del Rio kicks out at two. Ziggler misses a Stinger Splash and Del Rio hits the corner enziguiri for a two-count. Del Rio locks on the Cross Armbreaker but Ziggler is able to break free. Ziggler hits the Zig Zag to get the pin and become a two-time World Heavyweight Champion at 2:05. The crowd heat was off the charts for that, and they managed to build some drama into those two minutes.
Rating: *½