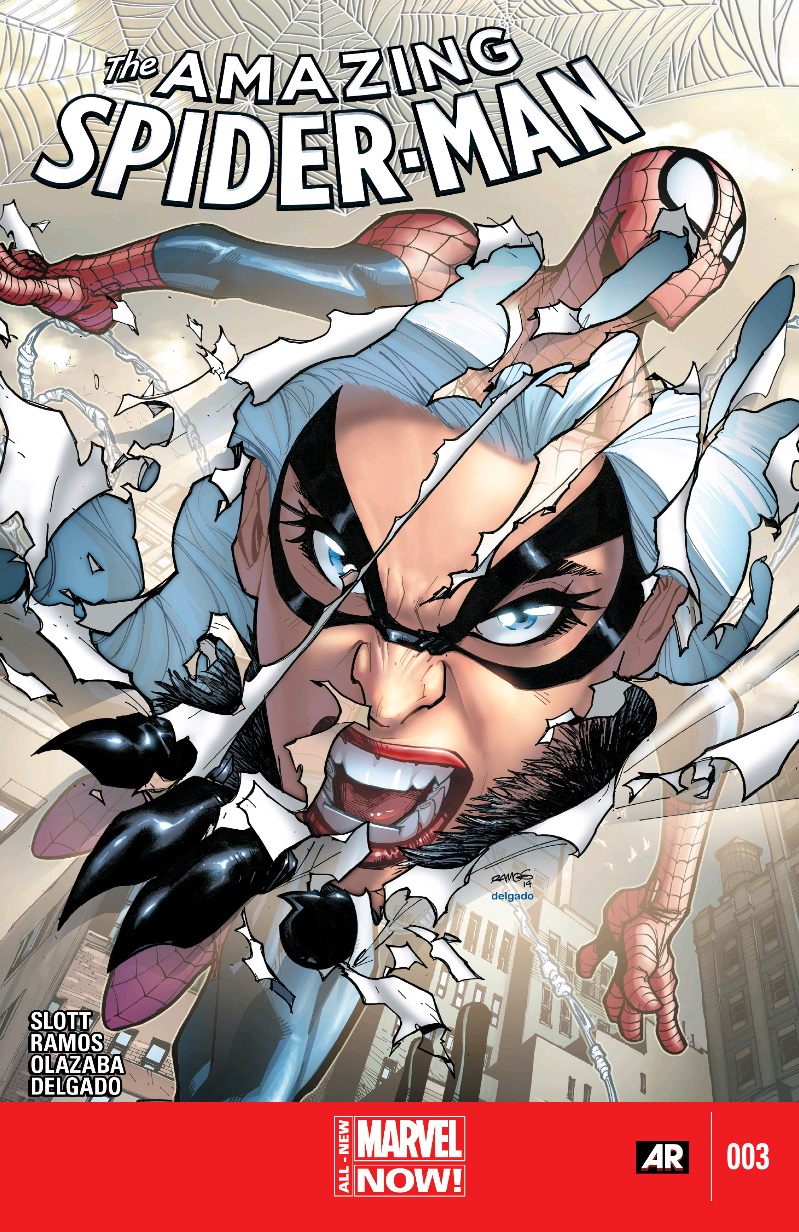 Summary (contains spoilers): This issue starts with a mysterious woman walking across the ceiling of her “prison” called “the Windowless Room.” She talks to herself about how bored she is, and starts to make a half-hearted effort to escape. She is warned by a recording of Ezekiel that if she left it would be bad for her and the “rest of us.” She collapses to the ground cursing Ezekiel. 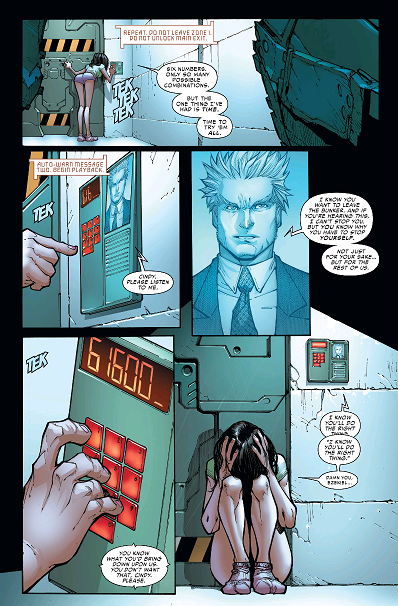 Meanwhile, in the Upper East Side of New York City, Black Cat breaks into a penthouse apartment. She contemplates where things have gone wrong for her, including wanting to rip out Spider-Man’s heart for betraying her. 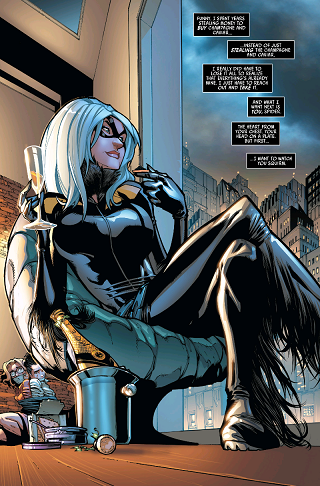 Electro is having nightmares about the torture Superior Spider-Ock put him through, and ends up setting a homeless shelter on fire in his sleep. He blames Spider-Man for how his life has fallen apart.

While this is all going on, Peter Parker is trying to readjust to his life. He is trying to be a more fun boss for the employees at Parker Industries, who are starting to wonder if he’s bipolar. They help set up a device to track down Electro, and to celebrate, he wants to take the team on a field trip to collect energy readings from Electro’s last known locations.

Meanwhile, Anna Maria decides to continue on with the work Spider-Ock had been doing with nano-tech. Yeah…that will not end well for anyone.

Peter and his team arrive at the building Electro set on fire earlier. He sneaks off to switch to Spider-Man. Black Cat sees this on TV and decides to cause some trouble. Spider-Man helps some fire fighters (including Mary Jane’s new boyfriend Ollie) rescue families trapped in the burning shelter. Ollie ends up failing through some fire-weakened boards thanks to Black Cat’s bad luck powers. She attacks Spider-Man who has no idea how Spider-Ock had ruined her life. Spidey tries to explain that it wasn’t him…but that doesn’t go well… 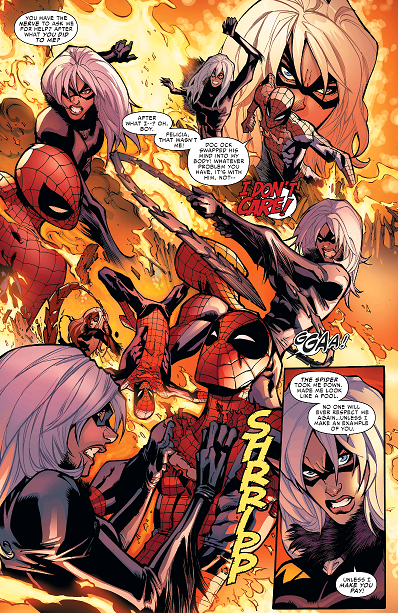 Spidey pretends to still be Doc Ock, and this causes Black Cat to take off to try and even the odds. Spidey rescues Ollie from the burning building.

Meanwhile, Black Cat steals wallets and the Electro tracker from Peter’s staff. She tracks down Electro and offers to team up with him to take out Spider-Man.

OH! And JJJ gets a job offer by “Fact Channel Studios” to have his own show.

Review: It’s been a while since I have reviewed Spider-Man. In the past, I have been pretty critical about Humberto Ramos’ work on this book. Part of this is was I used to be a huge fan of Ramos back on X-Nation and Impulse. But, so far, I think he’s done a terrific job on Amazing Spider-Man. The work is a lot more detailed, and just fits much better here than it did during Superior Spider-Man. I think Amazing Spider-Man has slowed it’s release schedule down some, which I am sure has helped a lot. This really looks like the top notch book it should be.

My favorite part of this issue was all the quick little scenes showing what the rest of the cast was doing. I think the girl in the beginning of the book is Silk, and I am pretty sure she ties into Original Sin and the upcoming Spider-Verse event. From what I’ve seen, she was also bitten by the same radioactive spider as Peter back in the day. I know a lot of people hate these types of retcons, but I typically enjoy these types of stories…as long as they are done well. I loved Winter Solider and Hush. Hated Sins of the Past.

I especially liked that Ezekiel showed up briefly. I enjoyed the various Spider-lore elements that JMS brought in during his run, and it’s good to see they aren’t all just lost in the back issue bin. Slott is the perfect writer to take the potential of these characters and ideas and bring them to life.

I definitely think they ended Superior Spider-Man at just the right time. It’s been fun seeing the ramifications of Doc Ock’s time as Spider-Man on Peter Parker, especially in terms of characters like Electro and Black Cat. They both now have a real personal agenda against Spider-Man, and that should complicate things nicely.

I did think that some of the scenes with Black Cat didn’t quite feel right.  It seems strange to be that Felicia has such animosity, even when Peter explains what’s going on.  She didn’t seem to care, more interested in redeeming her reputation than her long time friendship with Spider-Man.   It worked to create tension for the story, but it just felt like a real stretch from past characterizations of Black Cat.

That said, Amazing Spider-Man has been a real showcase that even when a character has been around forever, there still can be plenty of life in him. The first few issues of this series have felt real fresh, and that is despite the fact the creative team has been on this book for a long time now.  Definitely one of my favorite comics each and every month.