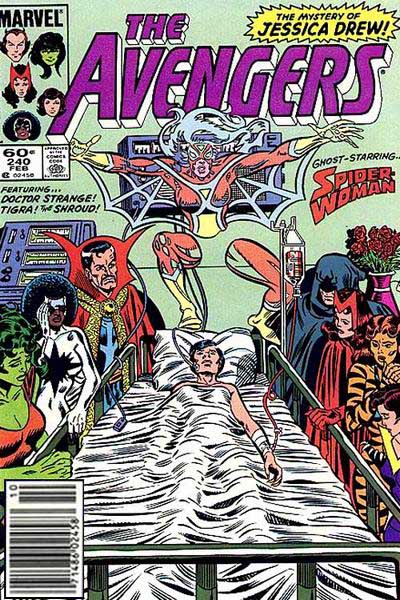 With perhaps a little too much time on my hands, I recently and rather randomly decided to reread these fifteen issues of The Avengers.  These issues are notable in that somewhere within this realm, I first started regularly reading this title (I would have turned nine somewhere through this batch), and am able, by looking at price tags on bags, and the presence of UPC symbols or Spider-Man heads in the bottom left corner, able to figure out when I stopped buying comics on the newstand, and instead started getting them at the local comic store of my far-off youth (it’s long since closed, but it’s flagship store is still considered “the” store to shop at in my city).

Lots of stuff happened over the course of this year and a bit.  I’ll recap in bullet points, because these are very decompressed comics, and any one issue had more plot movement than a six-issue arc does today.

These were pretty enjoyable comics. 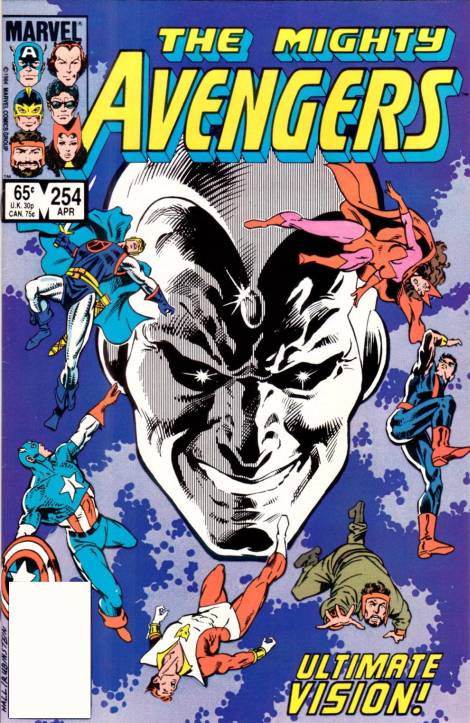 This represents only a small fraction of Roger Stern’s time on the title, which I remember as lasting for many years.  He does a good job of giving almost every character a moment or two in every issue, and took time to work on building up some of the lesser-known characters who didn’t have their own books (more on that in a moment).  It’s also a time where continuity mattered, so Captain America and Thor kept disappearing whenever they were busy in their own books, and those events were referenced in conversation between the teammates.

It was also a time where Roger Stern seemed interested in using the book to fix and address continuity issues from elsewhere (aside from stranding Quicksilver in a subplot to nowhere).  The Spider-Woman issues were used to resolve plot threads left hanging when her own book was cancelled.  Many of the villains that we saw (Maelstrom, the Blood Brothers, Quasimodo) were just left in limbo by other books, sometimes years before.  The Eternals storyline felt like it was being used to move the lesser-known members of that race out of the picture, although I don’t know why.

One thing that I remember most strongly from reading this books as a kid was how much I liked Captain Marvel.  This is the Monica Rambeau iteration of the character, a new hero who is still sometimes surprised by who she gets to hang out with while getting the hang of her powers and of being a pretty big hero.  Stern steadily built the character up (having her overcome her externally-induced fear in the battle with Maelstrom’s minions) and eventually placing her in charge of the team a few years after these issues.  I like that her race was never made an issue, and that Stern had her regularly checking in with her parents, who were just normal people.  I remember her being my go-to point-of-view character when I originally read these books, and am sad that the character was never used as well again (I like the way Al Ewing writes her in Mighty Avengers now, but Greg Land’s tracing of old Halle Berry pictures do not make her look or act like my Monica).

Another thing I loved about these old comics is the way in which the upper right hand corner was used to spotlight which characters were in each comic.  It changed from month to month, and I remember always getting excited to see that some of my favourites were going to be in the issue.

I had a lot of fun reading through these old issues, which I’ve owned for thirty years.  Some of them have yellowed more than I would have expected, but the ones I bought from a direct market store were in very good shape, and they all smelled wonderful.  I remembered a lot of the ads, and found it a trip to reflect on what was considered cutting edge in the world of video games.  I found myself wondering, yet again, why the people who made the home version of Star Wars: The Arcade Game didn’t get the dude in the ad to blow his nose first.  That used to drive me nuts as a kid.