Summary (contains spoilers): In San Fransisco, four purple children break in to a house, seemingly to abduct another child named Jamie. Jamie’s mom tries to save him, but she is confronted by the Purple Man…a former boyfriend. He touches her, taking over her will and forcing her to kill herself. He also touches Jamie, who turns purple and joins his brothers and sisters. It seems like Purple Man has been reproducing over the years, using his powers to seduce women and make them forget about him afterwards.

Later, Matt and Kirsten are at the zoo. 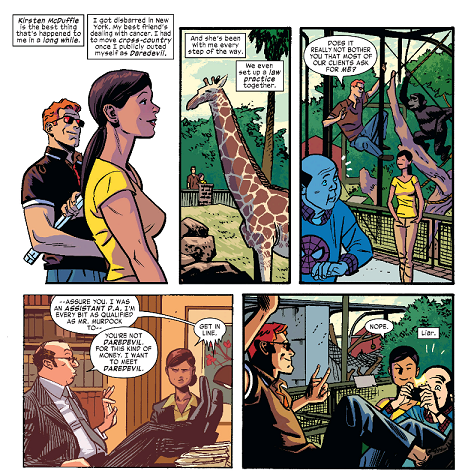 Kirsten reveals that her father wants to meet Matt. It turns out that he is in publishing and wants to give Matt $8 million to write “The Autobiography of Daredevil.” Matt and the firm could really use the money, so he considers it.

Soon after, they get a call from the deputy mayor and Daredevil is brought in on a suicide case that seems connected to his old enemy the Purple Man. When a witness tries to say what happened, a post-hypnotic suggestion left by Purple Man makes the man try to kill himself, but Matt manages to stop him.

Meanwhile, the children together are strong enough to overcome the Purple Man’s influence…which seemed to be his goal all along. 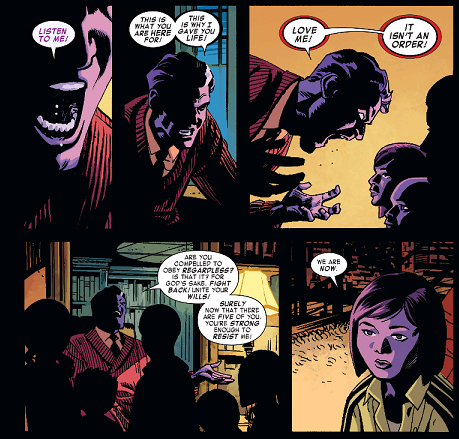 But he miscalculated…they are not only strong enough to resist him, but they can force their will on him. They are able to cause him to walk in front of a train. 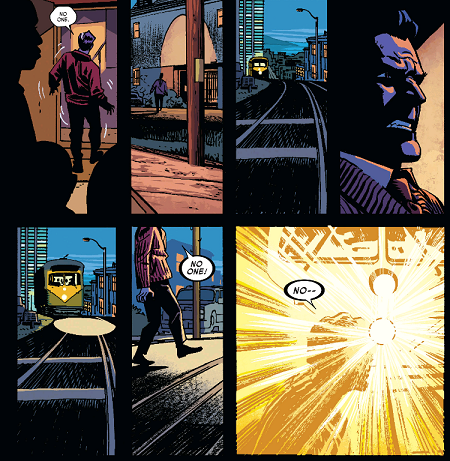 Review: Ever since I first saw the character in Alias, I thought Purple Man was a terrifying villain (with a terrible name). Purple Man basically has no morality and the power to bend a victim’s will to do whatever the Purple Man wants.  To me, that is a horrific combination.  He kept Jessica Jones as his personal slave for months on end, and in this issue, we found out that he’s been knocking up women for years in order to build his own little purple army. I definitely think this is a character that suffered greatly because of when he was created. If he was doing this kind of badass shit for the last thirty years, he would have been on the level of someone like Doctor Doom, but damn the comic code.

I wanted to review this issue just because I found it so damn disturbing. This is something I learned from Doctor Who over the years, if you ever want to make something extra creepy, have evil children. Purple Man’s little army of his spawn definitely should be an interesting threat for Matt to deal with.  I know that they will be giving me nightmares… 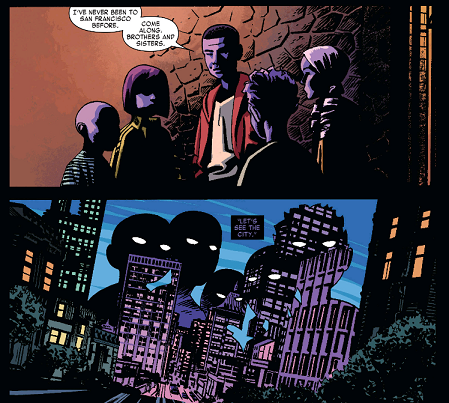 Daredevil continues to be one of the most solid titles on the shelf. I love that Waid manages to do some real dark and disturbing stories, without constantly dropping Matt into depression. This Daredevil is one who has come out of the other side of all the horrors he’s experienced, and genuinely enjoys life. I definitely prefer this less angsty Daredevil. There is only so much self-loathing I can take from a hero before I just find it unbearable.

For the most part, I think Chris Samnee and the design team do a great job with Daredevil.  I love how they use completely different palettes for the darker scenes contrasted with Matt’s date with Kirsten at the zoo.  Plus, the book always has a real unique look, which I think serves to set it apart from everything else out there.

I did think there were scenes that were a little too dark and made it hard to follow the action, especially the opening scene with the Purple Kids trying to kidnap Jamie.  There was this random shot of a little girl, and with the odd lighting, I couldn’t tell if she was purple or not, scared or angry.   It definitely bugged me and I spent a lot of time rereading that page to see if it was cleared up…it never was. 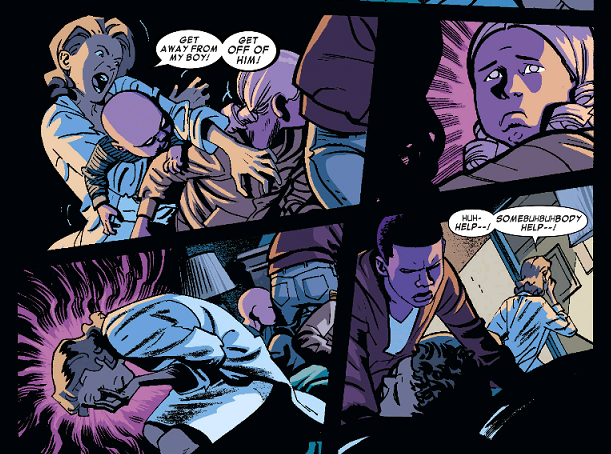 It may sound like a petty concern, but I find anything that throws me out of a good story (especially on the first page) to be problematic.

My other problem with this issue was that nothing really seemed to happen. The scenes with Matt and Kirsten were great characterization, but they took up so much of the comic that everything with the Purple Man and his kids seemed rushed. I am just not a fan of decompressed comic stories, I say that all the time. At 4 bucks a pop, it is nice to get at least something resembling a complete comic experience.

All that said, I definitely enjoyed this comic, and Waid’s Daredevil is a high point for a character who has had ridiculous luck over the years with creative teams. I am also real curious about what’s next for the Purple Kids!