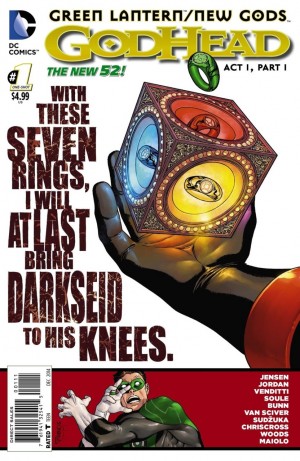 The issue opens with a brief history of the creation of the New Gods and the battle that ensued between New Genesis and Apokolips. Fast forward to the present and Highfather (with Metron) are speaking with Relic who is trapped within the Source Wall. They discover that the combined might of the Lanterns may have unwittingly allowed them to gain access to what may be the most powerful weapon in the universe. Meanwhile Hal and John are visiting the grave of Kyle who died during the fight with Relic. Over at New Genesis, Highfather gathers Lightray, Orion, and others to create a plan of attack to gain the ultimate power. This leads to a series of confrontations between the New Gods and various members of the Lantern corps. Highfather believes that he has the ultimate weapon in his possession, the Life Equation, but soon finds that it may not be the case at all. Undeterred he plans to find one person that can help him gain the weapon and destroy Darkseid and that individual is Kyle Rayner.

So it is good to see the New Gods again after the whole Final Crisis thing, which I guess doesn’t really count. With that it was also good to see some Boom Tube action again too. The cover actually grew on me as well (with the Highfather quote). It reminded me of the one thing that I didn’t mind about Countdown, the ads with the Darkseid quotes, etc. Yeah, that was the only thing about or related to Countdown that I liked. I disliked Relic a great deal so I liked the fact that he is relegated to being stuck within the Source Wall. I liked how Lightray was portrayed because he seemed like he was acting in character. Some of the confrontations between the New Gods and the Lanterns were decent such as the ones involving the Red Lantern and the Star Sapphire. Highfather is kind of reminding me of the Guardians (the ones that Sinestro killed). He believes that he is acting on the best interests of all, but is too arrogant and cold in the process. The tension between New Genesis and Apokolips is well represented by how far Highfather is willing to go to stop Darkseid. The Van Sciver pages were very good as usual and there was some nice work throughout the book as well. I did appreciate how Maiolo was able to adjust his colouring style to match each artist. There was some stuff in this issue that I enjoyed.

There was definitely some stuff that reminded me why I dropped the whole GL line during the Lights Out arc. I was really meh about Mogo being in danger once again. What’s so menacing about a giant planet with immense power when it always seems to be incapacitated all the time? It was news to me that Kyle died because I left Lights Out about two issues in. Sadly, I was not affected by this at all. I’ve followed his character since the 90s and really enjoyed him. I was stressed out that he would be killed way back in Green Lantern Rebirth and almost avoided reading a couple issues because of it. He died during an arc that felt forced and to stop a villain that I could care less about. The fact that he died and I was unaware of it and still didn’t really care shows me that I made the right decision about walking away from the titles. I was aware that Sinestro had returned, but I still feel that his return could have been put back a bit. Mind you I believe that it was Johns who brought him back for Forever Evil. Part of me just isn’t sure if the creative team will do Sinestro justice. He was a major highlight of Green Lantern prior to Venditti’s run. One character that I was really disappointed in was Metron. He was such a dink in this issue and not the cold and calculating kind of dink. He was just a dink in this issue for the sake of being a dink. He would purposely try and be a pain, which is unlike him because he’s supposed to be above that type of pettiness. He sits in a chair and does not have to lift a finger because he’s so damn intelligent and powerful…should be virtually impossible to mess him up. He’s the cosmic equivalent of Batman in a way, writing him should be foolproof. This is what still irks me about the New 52 is the unnecessary revamps of characters that simply did not need them. Visually there were some parts where I had trouble following the action. It was like that episode of the Simpsons where they watched the artsy t.v. ad Mr. Plow and they wondered if they had actually watched it after it was over. Homer meekly said, “I don’t know.” I felt that kind of confusion in a few spots. Then there were the scenes with Saint Walker who seems to be a shell of his former self. So I read that the Blue Lantern Corps were eliminated. Well they weren’t exactly something that brought down the GL-verse and there could have been more interesting ways to get them out of the picture for a bit (a sabbatical or something). Even having a civil war amongst them would have been better than to simply wipe them out because they were too powerful to have around. At this point, I’m thinking just put Saint Walker out of his misery even though I’ve enjoyed the character. I really wish they had just one artist for this book. I used to like it when Van Sciver would do the introductory issue to a GL event. The changes in art style were too jarring for my liking. I don’t like it when it feels like I’m reading an entirely different book. Also, I did not like the red and white panels during the fight scenes. In other books I would like them, but it just didn’t suit this particular one. Another thing that had me thinking WTF (and no it doesn’t stand for ‘why the face’ this time) was the timeline between Lights Out and Godhead. Hal mentioned that an entire year had passed. In comic time, that is a major period of time to pass…too much. Oh yeah, and Arkillo gets his ass handed to him yet again! He used to be a badass and yet he jobs out to anyone who seeks his ring. He full-on turned into the Great Khali of the Sinestro Corps, he’s supposed to be big and menacing and ends up getting beat all the time. There was just a lot for me that didn’t work in this issue.

Shelf Read It. Thumb through some of the pages at your LCS and see what you think. If there are some details that bothered me that don’t bother you then maybe you’ll enjoy it. I can’t recommend buying this title though. The premise isn’t bad so far and I will see where it goes for a little bit (this arc is on a very short leash with me), but it still carries the baggage of what the GL-verse has become. The pricetag is hefty (5 bucks), but at least you do get a lot of pages (around 40 I believe). However, if there was more stuff to like then it would have been a much more enjoyable 40 pages. The last GL title I spent a lot of money on was Johns’ last issue and that one was worth it. I do appreciate the high amount of quantity that is available at this price point though, but the issue for me is more about quality. This wasn’t necessarily a bad issue overall, but there were some things that just outweighed the good for me.  The cover did have a cool old school vibe to it that I liked at least. I’ll give this arc a couple more issues though mainly because I have really enjoyed some New Gods stories in the past and it’s good to see them back at the forefront.