Over at Valiant’s website, they have announced six new series coming next year: 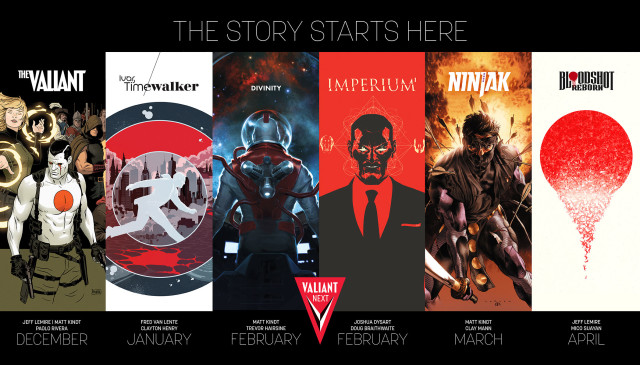 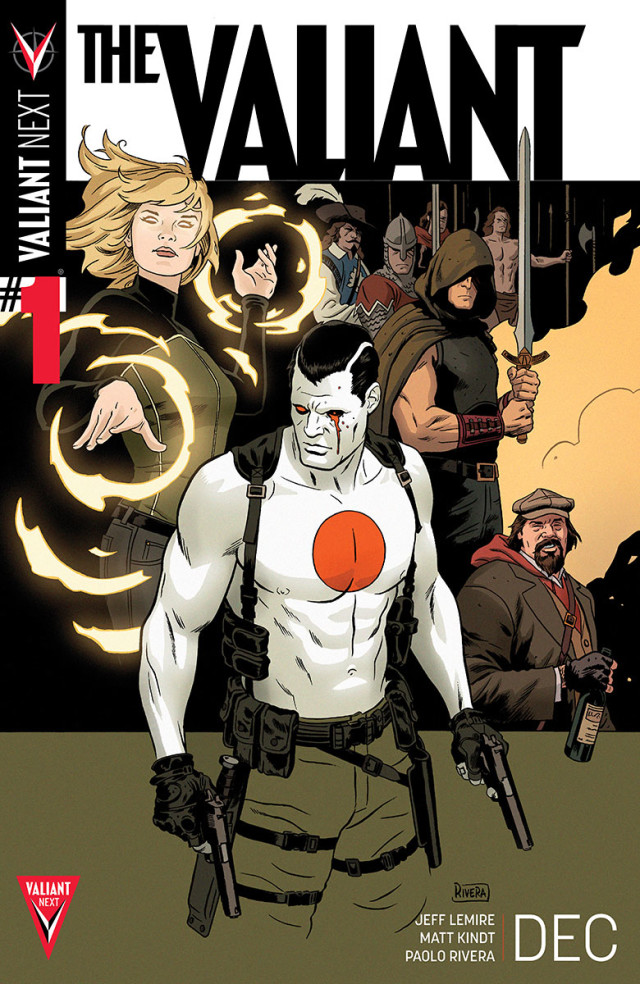 A battle ten millennia in the making…

The Eternal Warrior has protected the Earth for more than 10,000 years. A master of countless weapons and long forgotten martial arts, he is guided by the Geomancers – those who speak for the Earth. During his long watch, the Eternal Warrior has failed three times. Each time, the Geomancer was killed…and a new dark age for humanity began. Each time, he was unable to stop The Immortal Enemy – a monstrous force of nature. A civilization killer. A horror that appears differently each time it arrives…and whose seemingly only purpose is to bring disorder and darkness to the world. Now, the time has come for The Immortal Enemy to return once more. But, this time, the Eternal Warrior will be ready. This time, he has a force greater than any single warrior. This time, he has…THE VALIANT.

Skitch Commentary: I sort of think this one would probably have made the most sense as a story arc in Unity, or maybe a crossover similar to Armor Hunters.    When I saw Prestige Format, I was worried this would be overpriced, but the December solicits have it listed at 4 bucks, so dodged a bullet there at least.

I like Paolo Rivera’s art a lot, and Valiant has never let me down, so I expect this will be very good.   I was a big fan of the Geomancer concept from the original Valiant, and I definitely wanted to see new Valiant do more with it. 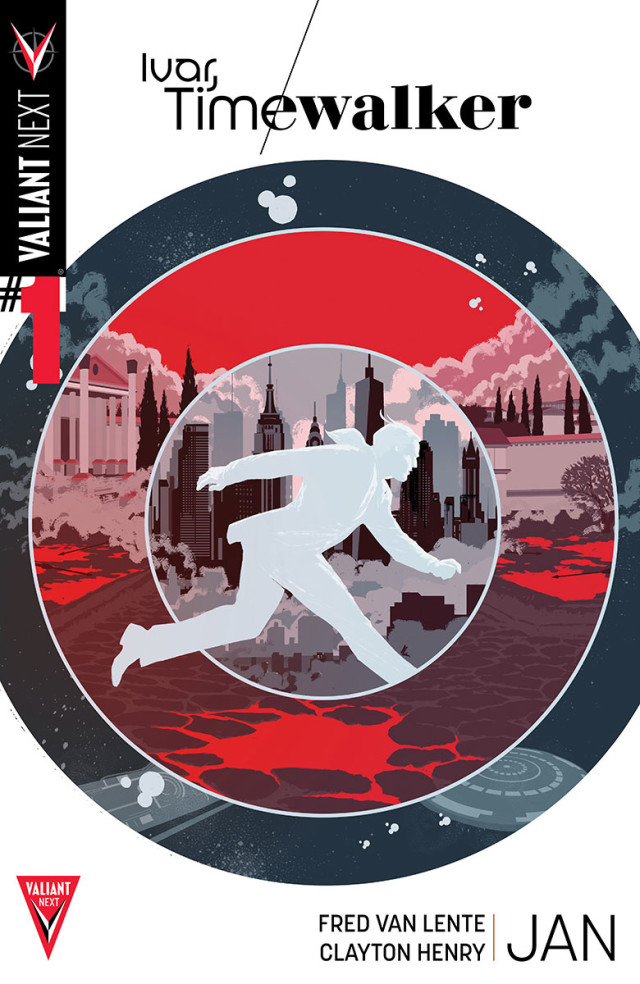 At this very moment in Geneva, Switzerland, history is being made. A thousand meters underground inside the Large Hadron Collider, researcher Neela Sethi is about to discover time travel – and jeopardize her life in the process. But she doesn’t know that yet. Ten minutes from now, every deadbeat chrononaut, wannabe conqueror, and misguided protector of the timestream will be banging down her door. Good thing that the legendary Ivar, Timewalker, got there first…right? Now it’s down to history’s most jaded, most tempestuous time traveler to stop the worst of everything that is, was, and will be…before time runs out!

Skitch Commentary: I would rather see Archer and Armstrong get more issues under Van Lente and Henry, but Ivar is a cool character, and I love time travel stories, so I will definitely check this one out.  I just hope we get some guest appearances by Armstrong, and Eternal Warrior.  The three immortal brothers have always been my favorite part of Valiant. 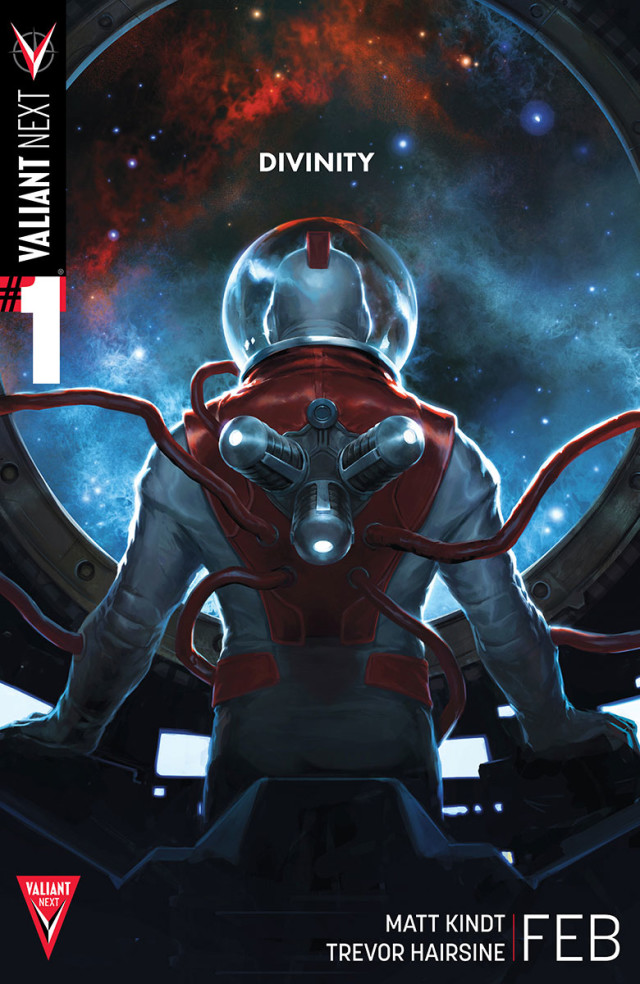 At the height of the Cold War, the Soviet Union – determined to win the Space Race at any cost – green lit a dangerously advanced mission. They sent a man farther into the cosmos than anyone has gone before or since. Lost in the stars, he encountered something unknown. Something that…changed him.

Long thought lost and erased from the history books, he has suddenly returned, crash-landing in the Australian Outback. The few that have been able to reach him believe him to be a deity -– one who turned the scorched desert into a lush oasis. They say he can bend matter, space, and even time to his will. Earth is about to meet a new god. And he’s a communist.

How long can it be before the first confrontation between mankind and DIVINITY begins?

Skitch Commentary: Of the six books, this is probably the one I am least hyped about.  It sounds good, and I am glad to see Valiant branching out with some new original material.  But I am real invested in Bloodshot, Ivar, Harbinger, and Unity, so the books featuring those characters definitely takes precedence over Divinity for me.  I already read WAY too many comics, so adding something untested is always a tricky debate. 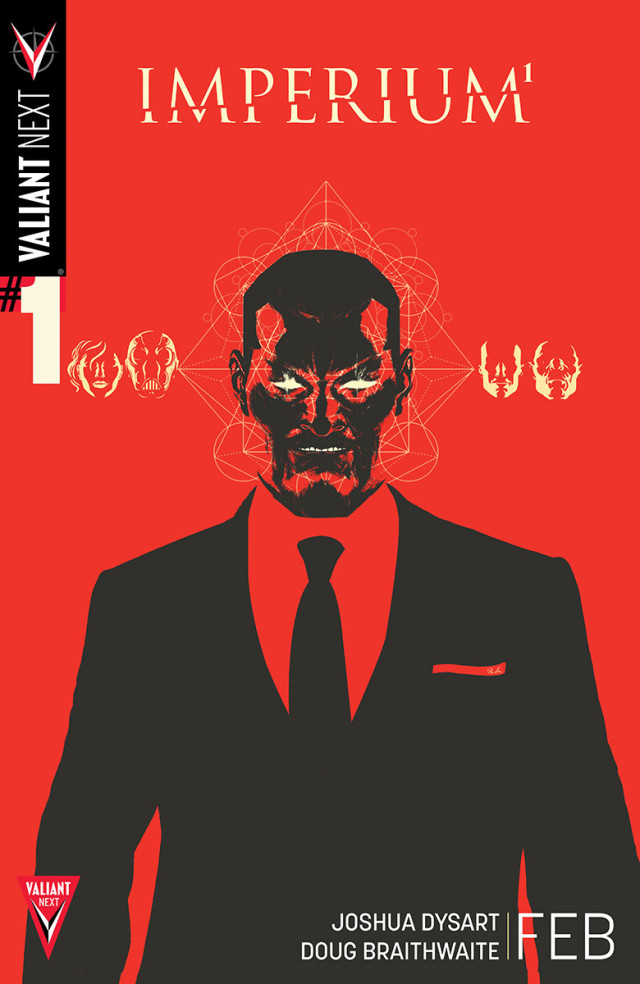 Toyo Harada is the most dangerous human being on the planet. Imbued with incredible powers of the mind, he has spent his life guiding humanity from the shadows. But today he is a wanted man. His powers are public knowledge, his allies have turned to enemies, and he is hunted by every government on the planet.

Instead of surrendering, Harada has one last unthinkable gambit to play: to achieve more, faster, and with less, he will build a coalition of the powerful, the unscrupulous and the insane. No longer content to demand a better future, he will recruit a violent legion from the darkest corners of the Earth to fight for it. The battle for utopia begins now.

Skitch Commentary: Joshua Dysart is back to do a Harbinger sequel.  COUNT ME IN!  Definitely the announcement I was most excited about here.  Harada’s little “empire” in Harbinger Omega was a bit overshadowed by Armor Hunters, but I really hope we get to see how this ties into the bigger Valiant story soon. 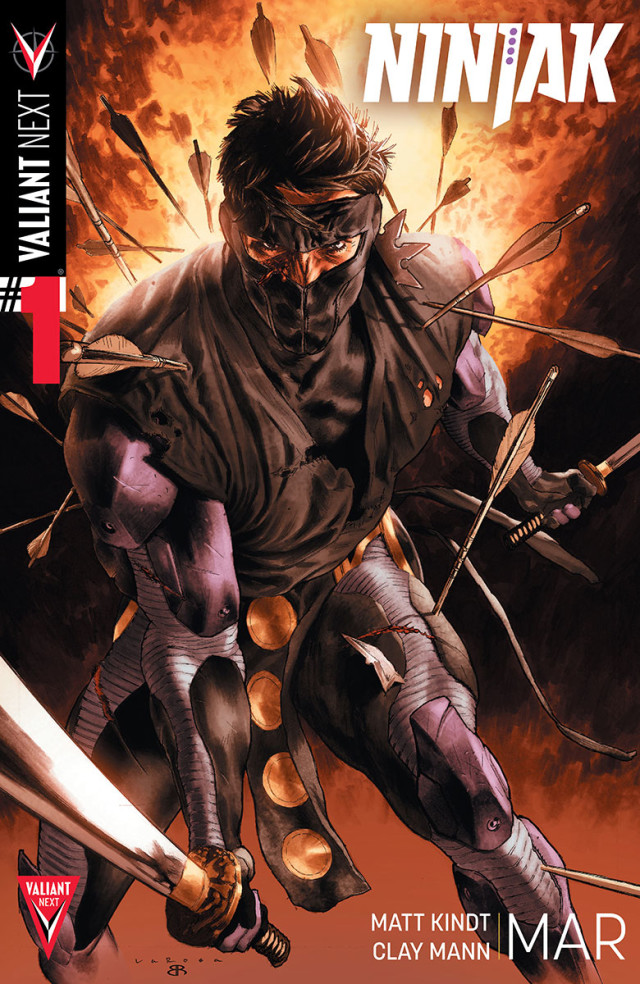 Then: Meet inexperienced MI-6 recruit Colin King on his first mission in the field as he learns the basics of spycraft and counterintelligence, and develops a volatile relationship with his first handler.

Now: Colin King is Ninjak, the world’s foremost intelligence operative, weapons expert, and master assassin. And he’s hunting the Shadow Seven – a secret cabal of shinobi masters with mysterious ties to his training and tragic past.

For the first time, Ninjak’s past and future collide in the pages of an all-new ongoing series from New York Times bestselling writer Matt Kindt and superstar artist Clay Mann!

Skitch Commentary: I was just telling Grey yesterday that I am a sucker for spy comics.  I always liked Ninjak, even though his original ongoing series was often hit or miss.   Kind of cool that we will get to see some of Ninjak’s background.  He really hasn’t been all that fleshed out in New Valiant yet.   Definitely checking this one out. 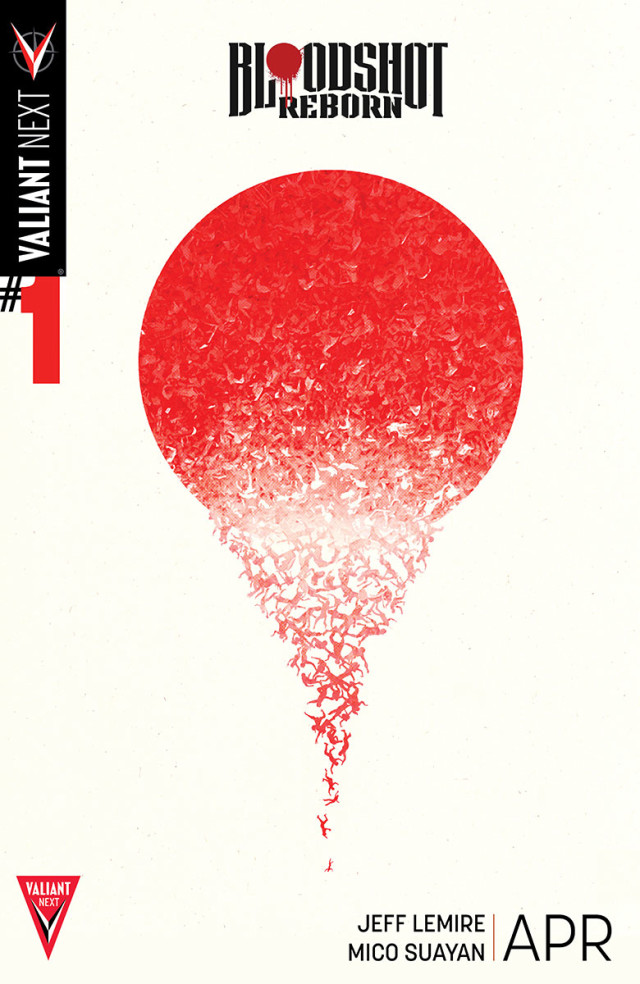 Bloodshot’s nanites made him a nearly unstoppable killing machine. His enhanced strength, speed, endurance, and healing made him the perfect weapon, and he served his masters at Project Rising Spirit – a private contractor trafficking in violence – very well.

Now, Bloodshot is a shadow of his former self. He lives in self-imposed exile, reeling from the consequences of his past life and the recent events that nearly drove him mad. But when a rash of shootings by gunmen who appear to look just like Bloodshot begin, his guilt will send him on a mission to stop the killers, even if it means diving headlong into the violence that nearly destroyed him.

Skitch Commentary: Bloodshot seems to have a hard time maintaining a status quo.  I really liked when this book was Bloodshot and HARD Corps, so I am not sure this change was needed.  But, I love Bloodshot, so I will definitely be buying it.   I just don’t want Valiant to become Marvel and launch a new issue 1 every time their books take a change in creative direction.

I am very happy to see Valiant continue to grow and evolve. I was hoping to hear about the return of Archer and Armstrong or the Renegades, but I will definitely check out at least five of these six books. Divinity is definitely a wait and see for now.