Well, that was an unpredictable episode. How are you guys liking this season of Survivor so far? I’ve yet to be very impressed by the cast. One tribe can barely sustain themselves, and the other lost almost every challenge. Strategy-wise, no one has knocked my socks off. Right now, my favorites are Josh and Reed.

This episode had a big tribal shuffle-up, which I always have mixed feelings about. Yes, it can liven up a stagnant game. But it also undermines real strategy and alliance-building, which rubs me the wrong way. I hate seeing good players get voted out because the picked the wrong colored buff out of a hat. 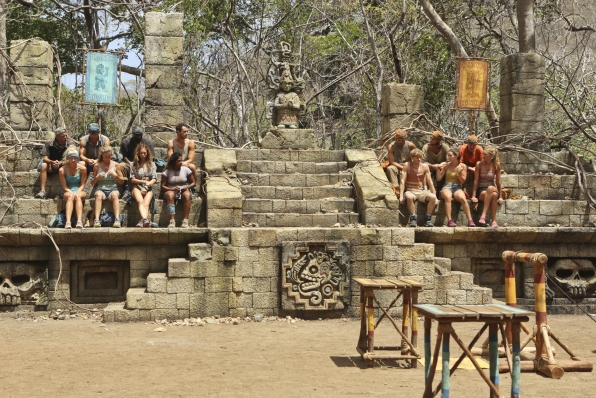 Of course, I’m particularly sour about this particular shuffle because my Survivor office pool pick was voted out. Goodbye, Kelley – I had such high hopes for you!

Wes, Alec and Josh joined Reed, Jeremy, Julia and Natalie on one tribe. Jon, Missy, Keith and Kelley joined Jaclyn, Baylor and Dale on another. How the tides turned for Jon! The night before he was taking his “apology tour” and trying to mend fences after his pal Drew was voted out. Then he became a valuable swing vote.

On the blue tribe, Josh and Reed have become targets since they’re a couple. Wes is also a target to some degree, since his kid is still in the game. But they didn’t have to worry about that, since their tribe won a very muddy Immunity Challenge. What they do have to worry about is food. That tribe was not rationing well, and they’re almost out of rice and beans. Another reason to hate tribal shuffles! Now Wes, Alec and Josh must suffer because of another tribe’s idiocy. I can’t wait to see what the sacrifice for more rice is – my mom’s guess is that they’ll have to vote out a player in order to get the new bag of rice.

Over at the other tribe, Keith was worried about his position in the game for, like, all of two seconds. Sure, he’s the only single on his tribe. But pretty soon the beef between Dale and Baylor took all the focus off him (not that there was any to begin with). It was Missy and Baylor vs. Dale and Kelley, and they were both vying for the votes of Jaclyn and Jon.

I actually thought Jon and Jaclyn would end up going with Kelley and Dale. Jaclyn didn’t trust Baylor or Dale, but I thought her previous interactions with Baylor had been more shaky. I thought Baylor would be out – or, at the very least, Dale. But when all the votes were read, it was Kelley who had the most! What? I knew they were splitting the votes, but I didn’t think Kelley was really on the chopping block. I was surprised. I wonder what conversations we didn’t see?